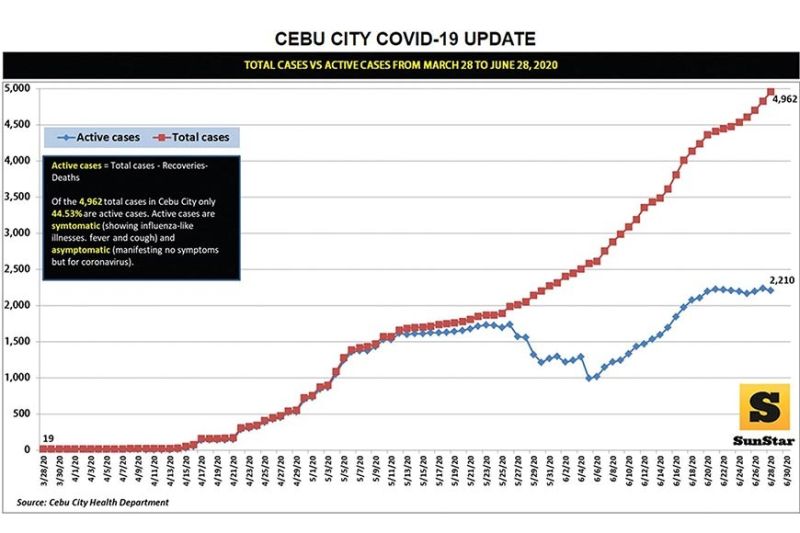 THIRTY-THREE out of every 100 persons tested for Sars-Cov-2, the virus causing the coronavirus disease 2019 (Covid-19), in the entire island of Cebu were found positive, the Department of Health (DOH) reported on Friday, June 26, 2020.

This made Cebu the highest among other areas in the country in terms of positivity rate for coronavirus from June 16 to 24.

Though Region 7, as of June 25, is only second to the National Capital Region (NCR) in terms of the overall active and new number of cases for the past 14 days, Cebu City ranks the highest in terms of top confirmed provinces or cities by active cases.

She said last May, the national testing daily output was between 8,000 to 10,000. It then reached 16,000 in June. She also said barangay transmission of the coronavirus is evident in Cebu.

The DOH data between June 16 and 24 showed that the positivity rate in Cebu was 32.8 percent, or 33 out of every 100 persons tested were found positive for the virus. This was at an average of 644 tests conducted per day.

For the same period, the NCR recorded a 7.2 percent positivity rate, while the national average was at 6.8 percent.

These showed that the positivity rate gathered in the entire island of Cebu has been higher compared to the NCR and the country’s average since May.

It has been four months since the World Health Organization declared a State of Public Health Emergency for Covid-19.

Ho said the DOH response is based on patterns and trends they got over the course of a certain period of time and not merely based on daily case reports.

She continued to remind the public to observe the prescribed health protocols, such as physical distancing, proper hand washing, cough etiquette and wearing of masks in public places. (WBS)