Cebu City ‘most likely’ to remain on ECQ in July 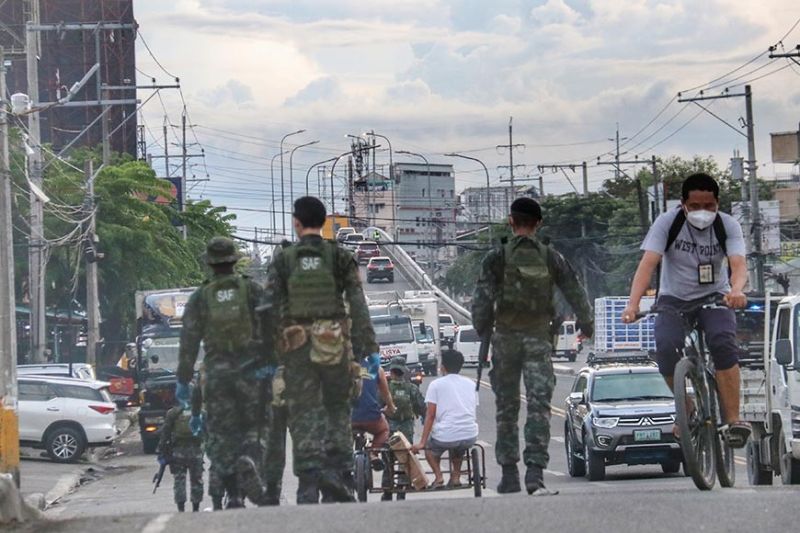 RESIDENTS of Cebu City would be wise to brace for an extension of the enhanced community quarantine (ECQ) after Tuesday, June 30, 2020, as cases of coronavirus disease 2019 (Covid-19) are seen to continue rising in the next two to three weeks.

National Task Force Against Covid-19 chief implementer Carlito Galvez Jr. on Monday, June 29, said stringent restrictions are still needed in the city, which currently has the highest number of Covid-19 cases among cities in the Philippines.

President Rodrigo Duterte is expected to announce late Monday the new quarantine classifications for the next two weeks.

Cebu City Mayor Edgardo Labella, for his part, said he doesn’t mind if the city will remain on ECQ after June 30 as long as this can stop the spread of Covid-19.

“The important thing is we can continue to implement the protocol and see to it that we will be able to stop the spread because the virus is still here,” Labella said in a mix of Cebuano and English.

The mayor said he will leave it to the Inter-Agency Task Force for the Management of Emerging Infectious Diseases (IATF-MEID) to decide on the city’s quarantine classification.

“We will continue with our mass testing so that we will know the gravity or extent of the spread so that we can treat them. We don’t mind when the numbers increase for as long as we will be able to test, trace and prevent the spread,” he said.

Despite the current crisis, Labella said the City must strike a fine balance between protecting health and minimizing the economic and social disruption of the ECQ.

President Duterte sent Cimatu to Cebu City last Tuesday to oversee the strict implementation of quarantine guidelines. Security will be tightened to ensure there will be no mass gatherings, while the City continues with its mass testing and contact tracing.

During the meeting, Labella said, they also tackled improving the Cebu City Quarantine Center at the North Reclamation Area by hiring additional medical personnel so the facility can accommodate severe Covid-19 cases.

Meanwhile, the DOH 7 said it will push for the downgrading of Cebu City’s quarantine status to general community quarantine (GCQ) if the IATF asks for its recommendation.

From the start, the agency wanted a sequential locking and unlocking of sitios and barangays, said DOH 7 spokesperson Mary Jean Loreche. “Placing the whole city on lockdown is not the solution,” she said in Cebuano.

She said she cannot categorically say whether the status of bed utilization in Cebu City is alarming or at critical levels since hospitals are expanding their dedicated bed capacity for Covid-19 patients.

Cebu City was first placed by Labella on ECQ on March 28. On May 15, the IATF-MEID decided to keep Cebu City under ECQ until May 31.

The city was listed among the areas under GCQ on June 1 to 15, but was reverted to ECQ for the period June 16 to 30 because of the high critical care utilization rate and widespread community transmission in several barangays.

Galvez said the surge in Covid-19 cases in Metro Manila from March 24 to April 13 is likely to also happen in Cebu City.

“What is happening in Cebu City is similar to what happened at the National Capital Region on March 24 and April 13. During that period, we noticed a surge in cases,” Galvez said in Tagalog.

He said the number of severe and critical cases of Covid-19 as well as the mortality rate have increased.

During a meeting between local government officials and physicians in Cebu City, Galvez said representatives of the government-run Vicente Sotto Memorial Medical Center reported that out of 122 deaths, 86 died less than 48 hours after admission.

“Meaning, they weren’t able to detect the severe cases immediately,” he said in Tagalog.

As of Wednesday, June 24, she said, 84 percent of the isolation beds—or more than eight out of 10—were occupied. Intensive care unit (ICU) beds were 55 percent, about half, occupied while ward beds were 64.9 percent, more than six out of 10, occupied.

“Our critical level is pegged at 70 percent,” Vergeire said.

Vergeire also noted that majority of barangays in Cebu City are seeing a high number of Covid-19 cases.

A total of 61 out of the city’s 80 barangays had new cases in the past 14 days while out of the 80 barangays, 49 were seeing clustering of cases, she said.

She said they were looking at four possible causes.

One, she said, was the easing of the restriction of movement in the communities.

Vergeire said another assumption they were exploring was the possibility of the cases being imported or sourced from those outside the community.

Thirdly, she said they were looking at possible problems in the compliance with health protocols, such as in testing individuals, isolating suspect or confirmed cases and in contact tracing procedures.

Vergeire said they also wanted to explore the possibility of local practices or culture that could aid in the transmission of Sars-CoV-2, the coronavirus that causes Covid-19.

Based on the latest records released by the CHD on Monday, Barangay Sambag 1 had the most number of active Covid-19 cases with 113, followed by Guadalupe with 106, Kamputhaw and Lahug with 100 each, Basak San Nicolas and Mabolo with 93 each, Tisa with 74, Sambag 2 with 71, Pardo with 66, Tinago with 59, Labangon with 56 and Capitol Site with 55. (PAC, JJL, MVI, HDT, SunStar Philippines, PJB)