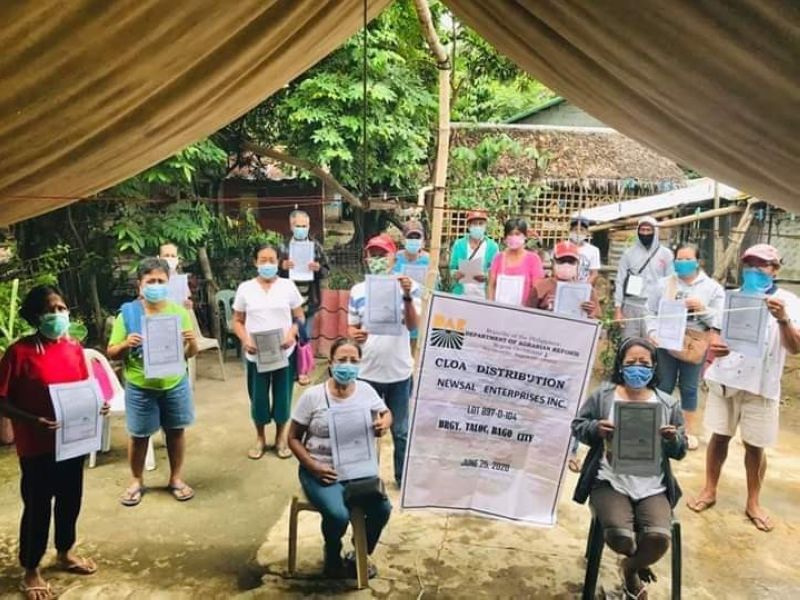 THE Department of Agrarian Reform (DAR) has awarded land titles and installed farmers in southern portion of Negros Occidental.

"As our way of paying tribute for being our heroes, we are happy to award the parcels of land covered through the Comprehensive Agrarian Reform Program (Carp) to all of our farmer beneficiaries who have spend most of their lives tilling the lands of other people just to raise their respective family and now, these lands are finally theirs," she said.

Consumo also challenged the farmer beneficiaries to help themselves by taking good care of their lands, so they can help uplift their lives and that of their families.

Senior Agrarian Reform Program Technologist Marvin Rubio, for his part, emphasized that after the DAR has distributed the land, the agency will help empower the ARBs by providing them support services to increase their production and income.

Rubio further explained to the farmers that their obligations stipulated under CARP particularly concerning the payment of taxes and land amortization to the Land Bank of the Philippines.

The 23 farmer beneficiaries are now the owners of the 35.2642-hectare landholding formerly owned by Luz Zayco and Marie Joan Bonnin, among others.

Municipal Agrarian Reform Program Officer Unita Silva, who led the installation rites, appealed to ARBs that they must cultivate their lands and should avoid engaging in prohibited acts particularly in ariendo system.

"Now that you are in the actual possession of your land, please be a good steward of it, not just now but for the rest of your life because this is one of the most precious gifts you can leave for your next generations," Silva told farmers.

As a good steward, the ARBs must first religiously pay their taxes and land amortization, she added.

Meanwhile, Agrarian Reform Program Technologist Jose Renan Taladtad said the registration of the organization of the ARBs is still on process.

Once registered, they must actively participate and strengthen their organization so that they can avail themselves of support services from various government agencies, he said.

He appealed to his fellow ARBs to cooperate in all the programs and activities of the agency.