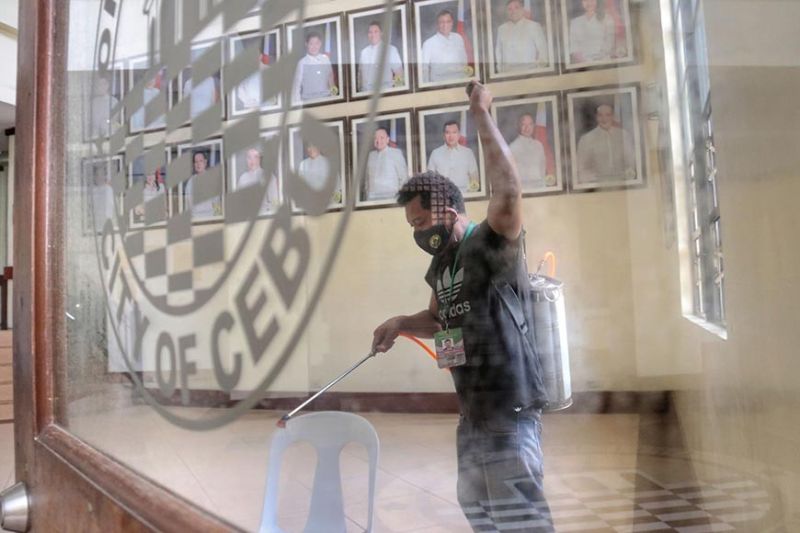 IT’S PERSONAL. A worker from the Department of Public Services disinfects the legislative building of Cebu City Hall on Tuesday, June 30, 2020. City Hall’s fight against the coronavirus disease 2019 couldn’t get more personal than this. City Attorney Rey Gealon says 69 employees of the Cebu City Government have contracted the coronavirus disease 2019. (Amper Campaña) 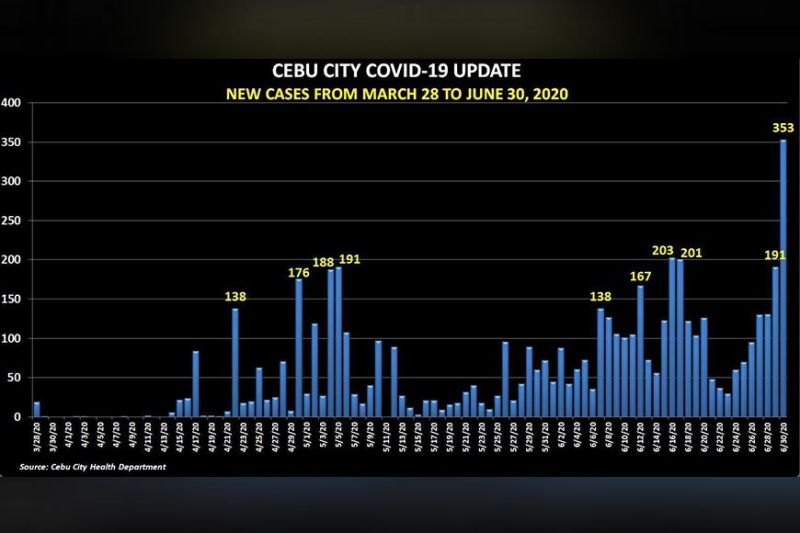 The City also reported 10 new recoveries, bringing the total number of recoveries in the city to 2,723.

The 353 new cases were spread out in 47 of the city’s 80 barangays, with four cases having unverified addresses.

Chan called on barangay captains to roam their areas and reprimand those found violating the city's quarantine protocols.

In Toledo City on the western coast of Cebu, five new cases were recorded on Tuesday.

One of the new cases is a 27-year-old man from Sta. Rosa, Laguna employed in a private company in Toledo City, while another is his 62-year-old colleague who hails from Bacolod City.

The patients are all in isolation and monitored by the City’s health personnel.

As of Tuesday, Toledo City recorded a a total of 23 Covid-19 cases, with two recoveries and one death.

In Carcar City, southern Cebu, seven new cases were recorded on Tuesday, bringing the total number of coronavirus infections in the City to 27.

Meanwhile, officials of Balamban town assured that confirmed cases of Covid-19 in the municipality are being monitored and contact tracing is ongoing.

This came as four additional cases of Covid-19 were reported on Tuesday from barangays Buanoy, Arpili, and Sta. Cruz.

As of Tuesday, Balamban reported a total of 11 Covid-19 cases, with two deaths and one recovery.

In Badian, the southern town has recorded its first Covid-related death, a 54-year-old male from Barangay Manduyong who was a dialysis patient at the Vicente Sotto Memorial Medical Center.

Badian now has a total of six Covid-19 cases, with one death.

For the second day in a row, around 1,000 Covid cases were added to the Philippines’ total case count. Of the 1,080 additional cases, nearly half or 468 came from Central Visayas.

Health Undersecretary Maria Rosario Vergeire said the total cases of infection in the country have reached 37,514.

She also reported 277 recoveries, which brought the total number to 10,233.

Eleven more patients died, raising the death toll to 1,266. Nine of these mortalities died in June.

Among the fresh cases, 430 came from Central Visayas, 158 from the National Capital Region (NCR) and 270 from other regions.

As of June 11, Vergeire said the reproductive number in the country was 1.3, which means that an infected individual can infect more than one person.

Cebu City had a reproductive number of 2.16 as of June 10, Vergeire said, which means an infected person transmitted the virus to more than two persons. (CTL, RDR, MVI / SunStar Philippines)