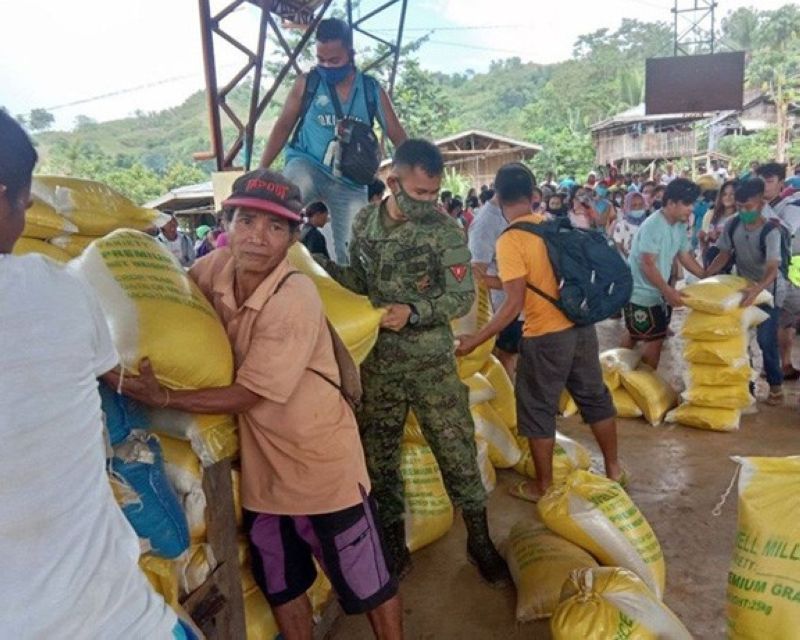 ZAMBOANGA. A total of 248 households in the remote village of Labangon benefited from the recent rice distribution by the Municipal Government of Dumingag in partnership with the 53rd Infantry Battalion and 547th Engineer Battalion. A photo handout shows a soldier assists in the distribution of rice. Each of the 248 households receive a sack of 25-kilogram rice. (SunStar Zamboanga)

A TOTAL of 248 households have benefited from the recent rice distribution in a remote village in the province of Zamboanga del Sur.

The Army's 1st Infantry Division (ID) said in a statement Wednesday, July 1, that the beneficiaries of the rice distribution were residents of Labangon, a far-flung village in the town of Dumingag, Zamboanga del Sur.

Each of the 248 households, "regardless of economic status," received a sack of rice, 25 kilograms each.

The rice was distributed by the Municipal Government of Dumingag in partnership with the Army's 53rd Infantry Battalion (IB) and 547th Engineer Battalion (EB).

A program on advocacy on dengue and coronavirus disease (Covid-19) prevention, to include the livelihood and food sustainability campaign under the genuine people's agenda of Dumingag was also held during the rice distribution activity.

In his remarks, First Lieutenant Oliver Carmen, operations officer of the 53IB, reminded the residents of Labangon village that they are always around to help them.

The 1st ID said the activity was also part of the surveying works undertaken by the Dumingag Municipal Engineer and 547th Army Engineers of the proposed Task Force to End Local Communist Armed Conflict (TF-Elcac) farm-to-market road project in Labangon.

"I am grateful to the 53rd IB and 547th Army Engineers for lending us a hand, first in the distribution of sacks and second, for facilitating the construction of Elcac road project here in Labangon," said Dumingag Mayor Joan Abejuela, who is also the MTF-Elcac chairperson.

"Through great collaboration and convergence, we will now finally be able to deliver basic and government services here in Labangon once the Elcac road project is realized," Abejuela added.

Dumingag, which comprises of 44 villages, is a second-class municipality in the province of Zamboanga del Sur. The towns has a population of 47,485 based in the 2015 census. (SunStar Zamboanga)