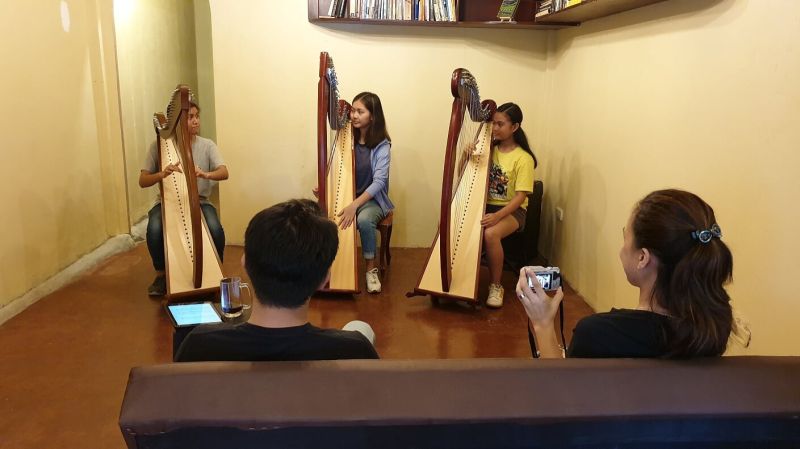 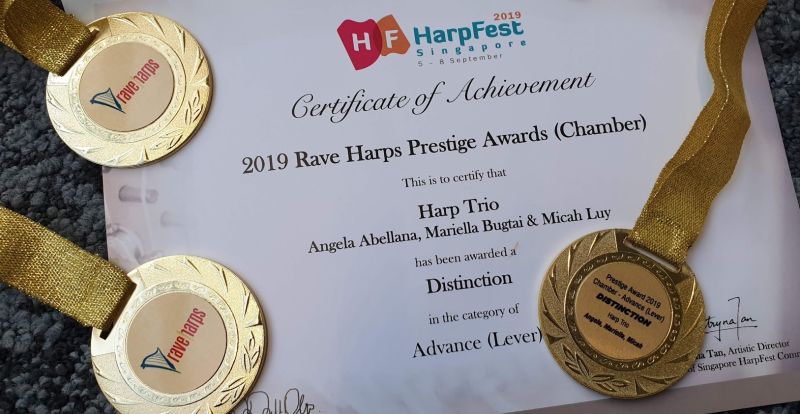 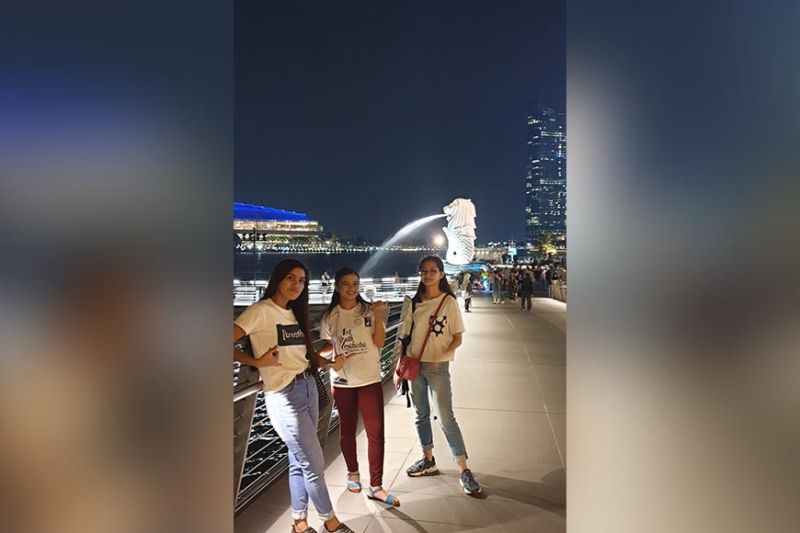 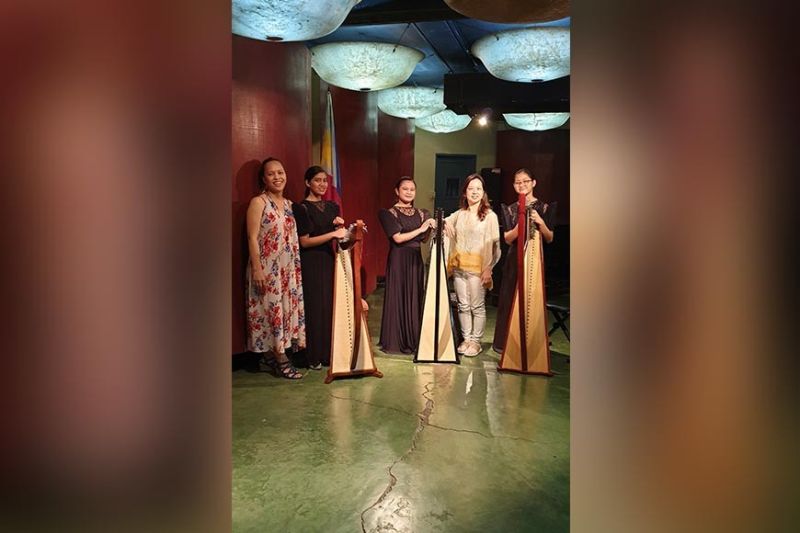 SunStar LIVE! (SSL): How did you learn to play the harp?

Micah: JoAnn Cerdenia was my piano teacher when I was five years old. I have been playing the violin for five years. I also play the viola. The only reason I started playing the harp was when Ma’am JoAnn asked if I wanted to learn it. I thought it would be difficult but when I continued with the lesson, I started to like the harp more and more.

SSL: What particularly do you like in the sound of a harp?

Mariella: The harp is a unique and elegant instrument. I love how it relaxes the listeners and especially me, the player. The harp has a natural lullaby sound and when we play it, it calms my soul.

Angela: The harp has a gentle and soothing sound. It may depend on the piece being played but most of the time it is a calming sound, and it makes me relaxed and calm.

Micah: There’s a calming sound that the harp makes whenever I play it.

SSL: What other instruments do you play?

Mariella: I play piano and percussion. I ventured into playing the harp as there are not many harpists in the Philippines, so being able to play it excites me and I feel a sense of responsibility to continue playing the harp. It is a great honor to inspire others to appreciate the instrument and to help the growth of the harp community.

Angela: I played the piano since I was six. I also play the violin with the Classic Youth Orchestra, the Adventist Academy Cebu Orchestra and the Cebu Metropolitan Symphony Orchestra. I am also part of the Harmonic Youth Choir as second soprano. When I started to play the harp, it was like a combination of my first instrument and the violin. A harp has strings like the violin but the strings are arranged like a piano. A lot of people do not play the harp so I wanted to try something new.

SSL: Are there harps available in Cebu?

Angela: My father, Rey Abellana (the man behind Coms) borrowed two harps from the Salvador and Pilar Sala Foundation Inc. (SPSFI) but the strings had to be replaced. He asked around for sponsors for the strings as a set cost P45,000. It was only after two years that he was able to get the strings, from Ma’am JoAnn herself and from her student, Miss Elizabeth Sy. The harps we are using are Celtic harps. We have a pedal and a lever. The locally made harps are played by using the fingernails to pluck at the metal strings. There are no sharps or flats and consists only of the C major scale.

Mariella: There are many local harps made in Cebu but not of the quality performance. The harp I use is from SPSFI, borrowed by Coms.

SSD: What made you perform as a trio?

Mariella: It all started with Ma’am Cerdenia who told us we would be competing as a trio. We flew to Manila to prepare for the competition and that’s how we all met.

Angela: I was asked if I wanted to join a competition in Singapore. I accepted, since it would be a nice chance to have an experience in competing internationally, and it would be my first. I also liked the challenge of playing as a group and I also expected to meet other harpists.

Micah: I was asked to compete with Angela and Mariella for the Singapore Harpfest 2019.

SSD: How did you come up with your name?

Micah: We never really considered having a name for the trio until earlier this year when we were asked for a name. Sir Hans, husband of Ma’am JoAnn, suggested the name.

SSD: What did you win in the Singapore competition and how did you prepare for it?

Micah: The competition for the harpfest was online. We recorded our entries and sent it to the jury. We practiced around three weeks and it was very, very intense. A month later, we were informed we were second in our category and we were given the chance to perform in Singapore for the Harpfest in September 2019.

SSD: How many times have you performed publicly as a group? Any more competitions to enter?

Angela: The first was when we had a recital before we recorded our presentation at the Harp Room Hall. The next was when we recorded our video for the competition in one of the halls of the UP Diliman College of Music, where there was also an audience. Then, a farewell recital before we left for Singapore. We also played at the birthday concert for Dr. Ingrid Sala Santamaria and in Robinsons Galleria.

Micah: We have not participated in any other competition but if given the chance, I would participate in it mostly for the experience.

According to Rey Abellana, JoAnn Cerdenia is from Cebu. She left Cebu for Germany to further her music studies. When she came back, she settled in Metro Manila and established the Harp Room, the only harp school in the Philippines. Years back, she often flies to Cebu to look for a partner with a music studio so she could teach Cebuanos to play the harp. It was only two years ago that she met up with Abellana and now there are classic harpists in Cebu. The South Harp Trio is the only trio of harpists in the Philippines.