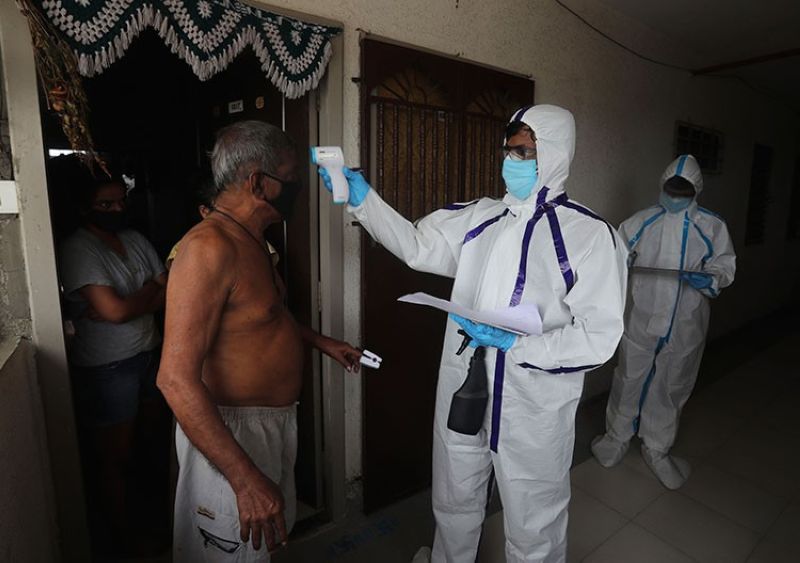 INDIA. A health worker checks the temperature of a man during a free medical checkup at residential building in Mumbai, India, Thursday, July 2, 2020. (AP)

NEW DELHI -- India's number of coronavirus cases passed 600,000 on Thursday, July 2, with the nation's infection curve rising and its testing capacity being increased.

A total of 17,834 people have died so far due to the virus, according to India’s Health Ministry.

More than 60 percent of the cases are in the worst-hit Maharashtra state, Tamil Nadu state, and the capital territory of New Delhi.

However, the western beach of state of Goa, a popular backpackin destination, opened for tourism on Thursday with the state government allowing 250 hotels to reopen after more than three months. Tourists will either have to carry Covid-19 negative certificates or get tested on arrival.

The state has reported 1,387 positive cases with four deaths.

Many industries and businesses have reopened since the country eased its strict lockdown in early June, and Indians have cautiously returned to the streets. Schools, colleges and movie theaters remain shuttered.

Prime Minister Narendra Modi said in a live address Tuesday that the death rate is under control but the country is at a “critical juncture.” He urged more stringent enforcement of distancing and other health guidelines.

The Health Ministry said testing has been ramped up to more than 200,000 every day, with 8.8 million test conducted so far. The recovery rate is 59.43 percent. (AP)