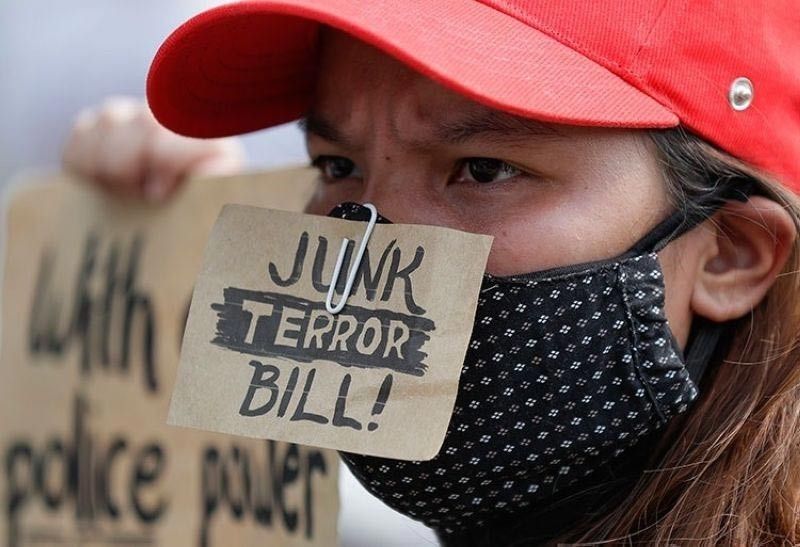 MANILA. Protests against the anti-terrorism bill have been held despite the prohibition on mass gatherings amid the Covid-19 pandemic. (File Photo)

In a statement, Presidential Spokesperson Harry Roque reiterated that the President signed Republic Act No. 11479, or the Ant-Terrorism Act of 2020, after studying the measure together with his legal team and weighing the concerns of different stakeholders.

"The signing of the aforesaid law demonstrates our serious commitment to stamp out terrorism, which has long plauged the country and has caused unimaginable grief and horror to many of our people," Roque said.

"Together, let us defeat terrorism and make our communities safe and secure under the rule of law," he added.

The controversial measure, which was the subject of recent protest actions despite the prohibition of mass gatherings amid the coronavirus disease 2019 (Covid-19) pandemic, would have lapsed into law next week.

The final bill was forwarded by Congress to Malacañang last June 9, about a week after Duterte certified it as urgent.

The Senate approved the measure on February 11, 2020 while the House of the Representatives approved a copy of the Senate measure on June 3 and later adopted the Senate version as amendment of its own version.

The President is currently visiting Zamboanga City, where he will meet with officials of the Philippine National Police and the Western Command of the Armed Forces of the Philippines to find out the circumstances that led to the killing of four soldiers by policemen in Jolo, Sulu.

Senator Panfilo Lacson, primary sponsor of the bill and a former police chief, credited the President for the enactment of the law.

"Much credit goes to President Rodrigo Duterte. With all the pressure coming from different directions against the signing of the anti-terrorism bill into law, at the end of the day, it is his strong political will that mattered most," Lacson said in a statement.

"I cannot imagine this measure being signed under another administration. If only for this, I take my hat off to the President. Rest assured that I will exert extra effort in guarding against possible abuse in its implementation, notwithstanding all the safeguards incorporated in this landmark legislation," the senator added.

Senator Francis “Kiko” Pangilinan, a vocal critic of this administration, said he was not surprised by Duterte’s approval of the bill.

“From Day 1, this administration unleashed draconian and authoritarian measures as a showcase of its brand of leadership,” Pangilinan said in a tweet.

“These draconian measures, however, have been exposed as nothing more than a show of senseless, mindless violence as means to sow fear amongst the people,” he added.

He was referring to the government’s war on drugs, declaration of martial law in Mindanao, “the longest lockdown in the world, and now the anti-terror law.”

He hinted of questioning the law’s constitutionality before the Supreme Court as he maintained that it will not solve the hunger and other problems caused by the coronavirus disease (Covid-19) pandemic.

Militant women’s group Gabriela described the law as a “prescription for worse rights violations amid the pandemic.”

Lawyer Democrito Barcenas, who was detained during martial law, was hopeful that the Supreme Court will strike the law down as unconstitutional.

"The signing of the anti-terrorism bill by President Rodrigo Duterte is the last nail in the coffin of our fragile democracy," he said.

He said the law will be used to silence dissenters and critics of the government.

"The courts have been castrated because warrantless arrests can be issued by the Anti-Terrorism Council which is not part of the judiciary but are all alter egos of the president," he added.

The Health Alliance for Democracy (Head) in Cebu called for the repeal of the law while condemning the lack of adequate response to the coronavirus disease 2019 (Covid-19) crisis.

"As the people have yet to see actual leadership amidst crisis, the government is now giving its people a whole new level of disaster in the face of the Anti-Terrorism Act of 2020," the group said in a statement.

In a statement crafted before the law was signed but released by the Office of the Presidential Spokesperson only on Friday, Roque said the Palace considered the concern raised by Bangsamoro leaders on the measure as "unfounded".

"They may have prejudged the law," Roque said.

Bangsamoro leaders had raised the concern that the measure would lead to abuse especially against the Muslims.

"Passing a class legislation against the Bangsamoro Autonomous Region in Muslim Mindanao (BARMM), I would like to stress, would not even cross the minds of the proponents of the said bill," Roque said

"This piece of legislation is against terrorists and terrorism and not against a particular regional/ethnic group," he added.

Roque said the President, who hails from Mindanao, understands this better.

Among others, the new law allows warrantless arrests of persons suspected of being terrorists. They may be detained for 14 days with an allowable 10-day extension, or up to a total of 24 days without charges.

The bill also penalizes persons who voluntarily and knowingly join any terrorist organization, association, or group of persons with imprisonment of 12 years.

Authorities may conduct 60-day surveillance on suspected terrorists, with an allowable 30-day extension.

To allay concerns of abuse, the Commission on Human Rights will be notified in case of detention of a suspected terrorist.