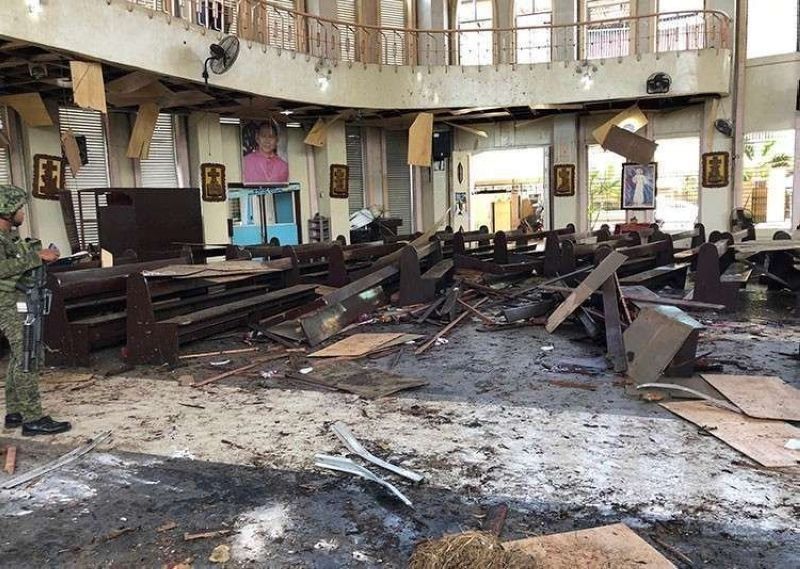 SULU. The interior of the Our Lady of Mt. Carmel Cathedral in Jolo, Sulu was destroyed after the twin bombings on January 27, 2019. (File Photo)

In a public briefing, Esperon said the council will probably get a copy of the newly signed law this weekend. He said they will review the law first to ensure that all members are in agreement.

The council is chaired by the Executive Secretary. The National Security Adviser sits as vice chairperson.

Members are the Secretaries of Foreign Affairs, Defense, Interior and Local Government, Finance, Justice, and Information and Communications Technology, as well as the executive director of the Anti-Money Laundering Council secretariat.

Esperon said the implementing rules and regulations (IRR) must be submitted to both chambers of Congress before the new law’s effectivity on July 19, 2020.

Esperon said the passage of the widely opposed Anti-Terrorism Act of 2020 is “a matter of necessity” as President Rodrigo Duterte experienced dealing with terrorists in his time as Davao City mayor.

He added that the President sees the importance of the new anti-terrorism law after he dealt with terrorist groups during his time as Davao City mayor.

Many Filipinos questioned the signing of the new anti- terrorism law amid the Covid-19 pandemic.

Esperon said that the government will not stop the critics of the new anti-terrorism law from questioning its constitutionality before the Supreme Court (SC).

He said the people opposed to the new measure were not able to read its provisions.

Esperon cited section Section 4 of the law which says terrorism “shall not include advocacy, protest, dissent, stoppage of work, industrial or mass action, and other similar exercises of civil and political rights.

But the law also criminalizes people who “incite others” to commit terrorism “by means of speeches, proclamations, writings, emblems, banners or other representations tending to the same end.”

The new law will also lessen the accountability of the police and military as they are now allowed to detain suspected terrorists without a judicial warrant of arrest up to 24 days.

Under the Human Security Act of 2007, law enforcers who have wrongfully detained suspects can be penalized P500,000 for every day of wrongful detention. (SunStar Philippines)