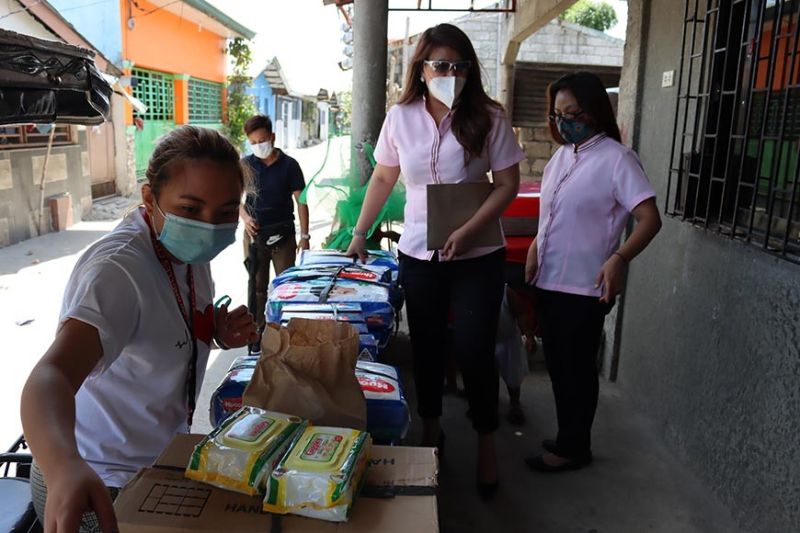 PAMPANGA. Angeles City Hall Executive Assistant IV Reina Manuel personally handed over the proceeds of the sale of Bella Manuel's paintings, as well as groceries and other supplies to Christine Abdon, Baby Sean's mother. Also in the photo is ACEDIPO-OIC Irish Bonus-Llego. (AC-CIO)

ANGELES CITY -- Seven-year-old Baby Sean from Barangay Pulung Cacutud has been struggling with a rare brain condition, hydrocephalus, in his entire life.

To help Sean’s family with his health expenses, a young painter from Angeles City, Bella Manuel, took the initiative to come up with funds for Sean from the sale of her paintings exhibited at One Town One Product (OTOP) shop, the souvenir center of Angeles City Government.

They personally visited them to hand over the money, as well as some grocery supplies.

Manuel said she was taken aback when Bella said she wanted to do something for Sean.

She also thanked the local businesswomen and officials who extended help for their advocacy to help those people who are in need.

Moreover, Bella's artwork titled "Chocoberry" priced at P2,500 was sold to Angeles City Vice Mayor Vicky Vega-Cabigting; "Garden" which is pegged at P3,500 was bought by Rea Dizon; and the "Horse" was sold to Cecille Sanchez-Flores for P5,000.

“This is just a beginning to raise awareness for this kind of rare brain condition. Let us show love to one another by sharing our blessings to those people who need it most,” Manuel added.

Hydrocephalus, according to the Hydrocephalus Association, is an abnormal accumulation of cerebrospinal fluid within cavities in the brain called ventricles. In infants, as the ventricles enlarge, the pressure causes the head to increase in size. (AC-CIO)