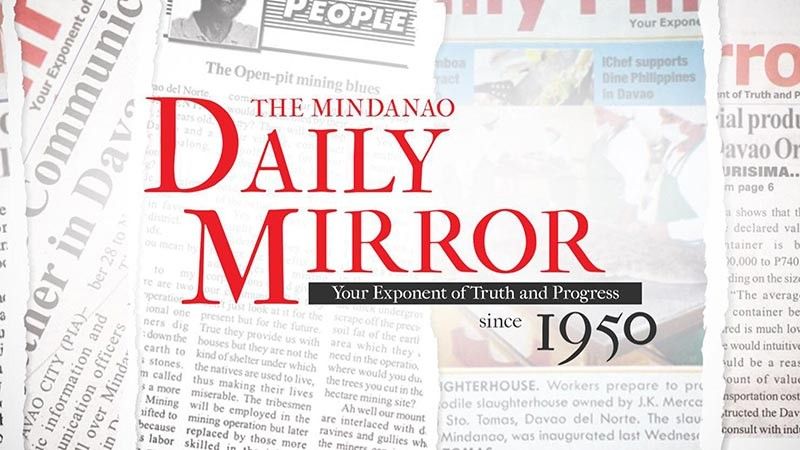 (UPDATED) After 70 years, Mindanao Daily Mirror, one of Davao City's oldest community newspapers, ceased its operation on July 3, 2020, due to restrictions brought about by the coronavirus disease (Covid-19) pandemic.

The management of Mirror has not issued a statement on the paper's closure as of press time. However, Editor-in-chief Jon Joaquin said in a forwarded statement that the lockdowns due to the Covid-19 pandemic had "drastically affected" the paper's operation.

Joaquin said the management can no longer sustain the paper's operation and printing cost.

He said Mirror's last press work was on July 2, with the last issue published the next day.

Joaquin said all Davao City-based employees have been retrenched but will receive salaries and other entitlements.

“There is no word if management will continue online platforms (website, Facebook, etc.). If they do, we (Davao City staff) will not be part of it,” he said.

For other questions, Joaquin, meanwhile, said "we defer to management to issue their statement on the matter.”

Mirror was established in 1950 by Dean Demetrio Flaviano and Anita Jacela Flaviano.

They were four years behind Mindanao Times, which was first published in 1946.

According to their website, it is the first daily newspaper in Mindanao, which carried the slogan, "Your exponent of Truth and Progress.”

Joaquin said on his Facebook post that the new management "had long-term plans that would honor the paper's status as an institution in Davao City.”

However, Joaquin said those plans were cut short when the Covid-19 pandemic hit the city in March this year.

"Covid-19 hit us hard and management has decided to close down the paper," he said.

Despite this, the editor-in-chief still thanked the management for supporting them despite the hardships the pandemic had caused.

"I am thankful to the management for seeing us through the dark days of the pandemic, but in the end, the harsh realities prevailed," Joaquin said.

Ruth Palo, a reporter, was among those who were gravely affected with Mirror's closure.

Palo, who only joined the editorial staff in 2019, was saddened by the newspaper's closure.

Despite the quarantine, Palo said the management assured that the employees' salaries will not be affected until the last day.

"What I will miss is the 'beating of the deadlines', which had been a practice of those working in the media industry. And also I will miss my news sources," Palo said in a phone interview.

Richy Nalagon, a former Mirror reporter, was also shocked that the paper had suddenly closed.

Admittedly, he said the print industry struggled due to the advancement of digital technology. However, he did not expect that the Covid-19 pandemic would be the reason for the media company's closure.

"Luoy ang mga empleyado, hilabi na ron nga lisod makapangita og trabaho aning pandemya (I am sad for the employees, especially that we are currently in a pandemic. It is hard to look for a new job during these times)," Nalagon said.

She said the Mirror is the second newspaper in Mindanao that was closed during the pandemic.

Mirror’s ceased publication came three days after the 25-year-old SunStar Cagayan de Oro stopped its print edition and would instead shift to the digital platform.

"This is happening across the globe and the media industry is forced to adapt to new technologies and new ways of doing things in such a short time," Cabusao said.

Philippine Information Agency - Davao Region Media Coordinator Edith Isidro said the paper has been one of the agency's "strongest partners" since its existence.

"We are hoping that somebody will take over to continue the paper's role in the development and progress of our country. We also wish and pray that its displaced journalists and workers will quickly find other employment opportunities for the welfare of their respective families," Isidro said.

The retrenched employees will now be part of the 200,000 workers affected by the companies' partial or total closure of business establishments due to the Covid-19 pandemic, according to the Department of Labor and Employment in Davao Region as of June 4.