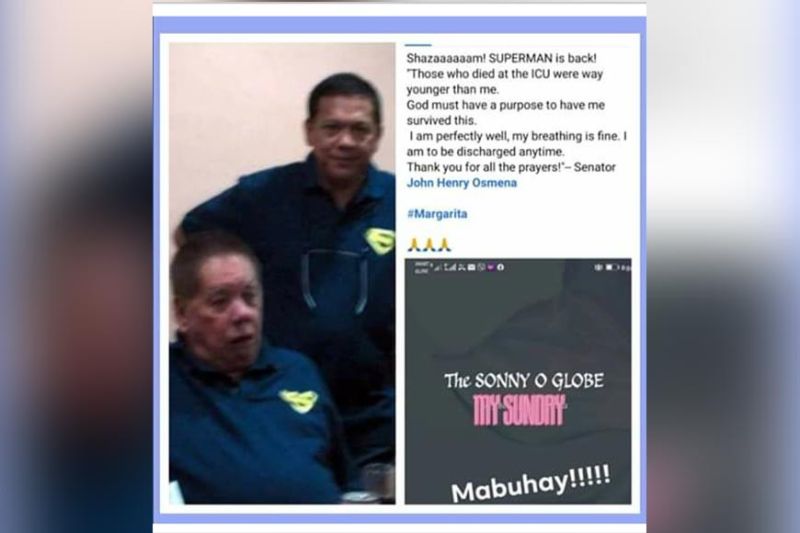 [1] PETITIONS FILED AGAINST ANTI-TERRORISM ACT. By the count of one news outlet, the petitions could go up to at least eight, mostly by groups. A few by individuals. It’s not the number of petitions though that matters but how the Supreme Court will decide.

Multi-sectoral personalities coalesced to produce the video that translates into Tagalog the speech of Charlie Chaplin in his movie “The Great Dictator” against tyrants. The video was posted Monday, July 6, by its director Chuck Gutierrez. It could not be immediately ascertained if a Cebu personality was among the people featured in the video.

The statement attributed to Sonny: "Those who died at the ICU were way younger than me. God must have a purpose to have me survive(d) this. I am perfectly well, my breathing is fine. I am to be discharged anytime. Thank you for all the prayers.”

The rumor about Sonny being rushed to the ICU and treated for Covid-19 broke out a few days ago.

Labra who compares says he wasn’t surprised by Osmena getting back his good health. He says he had worked with/for Sonny for 22 years. Sonny is diligent, Labra says, with the noise of his typewriter in his room telling them he was already at work at dawn.

Sonny was described in his Senate days as the "Lone Ranger," for his independent-mindedness and taking fearless stance on controversial issues.

Despite his “sterling record” as senator, The Lone Ranger lost in his bid for a fifth Senate term, with Cebuanos not giving him the solid support he expected. Blamed by some Cebu watchers was his “Pagpu-asa mo” statement to Cebu voters and, on his bid for the House seat in 2019, for leaving Toledo City where his reelection as mayor would’ve been much less tougher than beating Rep. PJ Garcia.

Now he is billed as a Superman, not for an election victory but for his recovery from a health crisis.

Sensitive to the recent accusation that some barangay captains in Cebu City were distributing rotten rice, Councilor Nina Mabatid made it clear after a day’s work doling out the rice in Mabolo that the rice was “maayong klase, puti ug gwapa,” just like her -- no, she didn’t say the last part, one of her fans in the broadcast media did.

Her Facebook post Monday, July 6, said the rice distributed in sitios San Isidro and San Vicente came from “atong Amahan sa Sugbo Edgar C. Colina.” She said the mayor and Mabatid had nothing to do with any spoiled rice distributed earlier with money given to barangays. The barangay captains, she said, picked the supplier.

The rotten rice, she said, could no longer be replaced as the supplier was missing and could not be contacted.