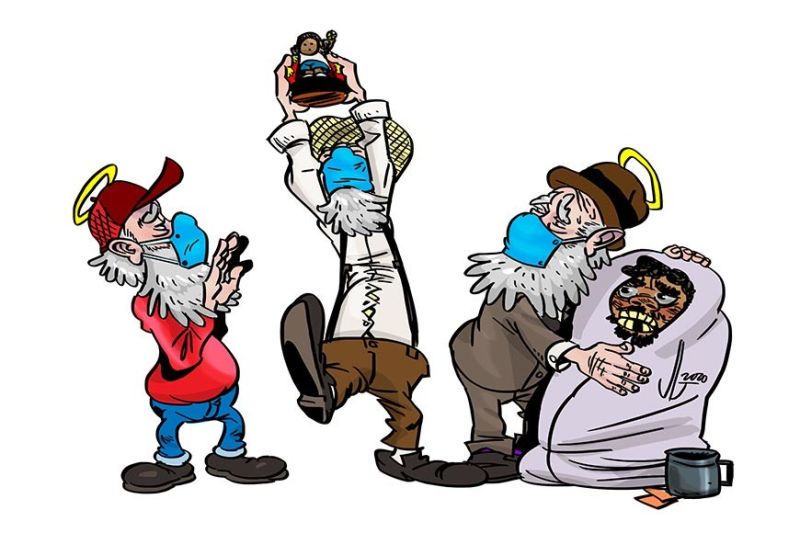 THERE are three barangays in Cebu City named San Nicolas, but two of them persistently figure in the news—Basak San Nicolas and San Nicolas Proper—one rather infamously, the other in quite good light, as the city reels in this pandemic.

Barangay Captain Norman Navarro’s Basak San Nicolas, which has as of 2010 census a population of 34,313, disrupted our attention as Cebu City tucked itself back into enhanced community quarantine (ECQ).

In Sitio Alumnus, Basak San Nicolas, on the night of June 27, 2020, a number of residents took to the streets for a Sinulog performance, promptly attracting crowds. The whole incident blew up on social media, and very rightly so, stirred the community in furious reaction. Didn’t help that, only recently, the Cebuanos recoiled from official diatribe with two hard bricks on its head—“gahi’g ulo” (hard-headed) and “bogo” (dumb). Unfortunate timing then that the Alumnus throng simply gave the visuals to the claims.

Navarro gave two conflicting statements in two SunStar reports. In one, he said thus: “Siyempre na-disappoint ko. Nagtrabaho baya ta. Usa ray sala gyud ato. Kadto gyud mitando ko nga magprosisyon sila. Tungod kay para kanako, walay sayop at okay relihiyuso man nga kalihokan (Of course, I was disappointed. We’ve been working. There was only one mistake. That was when I said yes to the procession. Because, for me, there was nothing wrong because it was a religious activity).” In another report, he said: “I denied their request. They asked me nga i-mobile na lang nila ang santos (if they could hold a motorcade for the icon), I told them I can’t decide because we’re under military control.” Both statements were reported on June 29, 2020.

Navarro will have his day to clarify details of the incident. City Attorney Rey Gealon said the City Legal Office would initiate criminal and administrative proceedings against the barangay officials. Whatever, much public contempt had been spent on it.

There is, however, a brighter story to highlight. Barangay Captain Clifford Jude Niñal’s San Nicolas Proper, a village of 6,240 in the 2010 census, has been providing shelter to homeless citizens and locally stranded individuals (LSIs) since March when the city was placed under ECQ.

Reports said Niñal had been forking cash from his own pocket to feed these individuals, now housed in the barangay gym. The village chief found it in good conscience to house these individuals, street dwellers, amidst the pandemic. Now that the city has been reverted to ECQ, he had to herd them back to the gym.

Incidentally, it was Niñal who also cried foul over the police’s brutish punishment of one of his constituents, a 58-year-old stroke survivor who was made to walk from Carlock St. to Barangay Basak under extreme heat.

The actor John Lloyd Cruz who has been in Cebu for sometime now has met, together with Sagguniang Kabataan federation president Jessica Resch, Niñal to talk of youth programs for the barangay. Good deeds never fall on deaf ears.

Meantime, Niñal is calling on the City Government to send a medical officer to look into the condition of around 100 homeless individuals and LSIs in the barangay gym. We suppose the barangay earned a special right to be attended to properly at this point in our crisis.