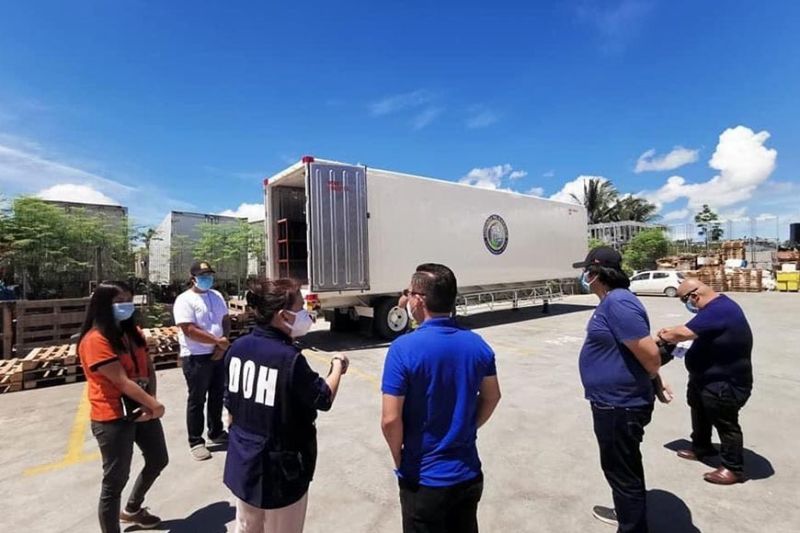 INSPECTION: Mandaue City Mayor Jonas Cortes (in blue shirt), seen here talking to an official of the Department of Health 7, inspects the P1.8 million containerized freezer van that the City will convert into a mortuary freezer for victims of the coronavirus disease 2019. (Contributed photo)

The freezer van will be used as a mortuary freezer.

Mayor Jonas Cortes inspected the freezer van, which is still in Consolacion, Cebu. It will later be moved to the Mandaue City Hospital where it will be used as an extension of the morgue.

The P1.8 million freezer van can accommodate up to 40 cadavers.

The City decided to purchase one after the mayor learned that public cemeteries had limited slots for immediate burial and it would take days to dig another tomb.

In addition, crematory facilities in the city, particularly at the Rolling Hills Funeral Homes, can only accommodate four cremations per day, which resulted in long lines and reservations. Families have to wait five to seven days before the bodies of their deceased loved ones can be cremated.

Some hospitals have a mortuary freeze but these charge between P8,000 and P10,000 per day, he said.

The mayor said the City will not charge for the use of the freezer van it purchased.

He also clarified that they will prioritize Covid-19 patients who died.

Cortes said the City has a partnership with Rolling Hills Funeral Homes to offer free crematory services to indigent families who died due to Covid-19.