City Health to stop posting updates on its Facebook page 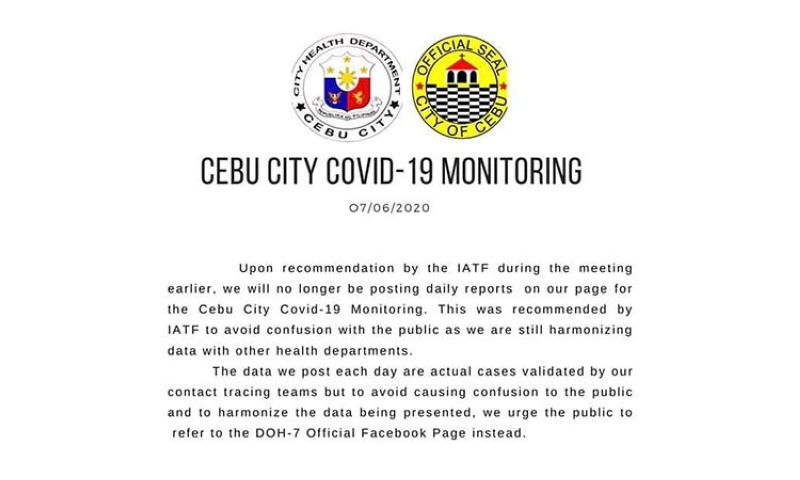 THE Cebu City Health Department (CCHD) will no longer post on its Facebook page the daily reports of Covid-19 cases in the city, said the CCHD in a post dated July 6, 2020.

This, upon the recommendation of the Inter-Agency Task Force for the Management of Emerging Infectious Diseases to avoid causing confusion among the public while its office and the Department of Health (DOH) are still harmonizing their data.

The CCHD further instructed the public to refer to the data provided by the DOH Central Visayas Facebook page instead.

In a virtual press conference on July 6, DOH 7 spokesperson Mary Jean Loreche said the local government units should wait for the validated data of the Regional Epidemiology and Surveillance Units (Resu) before they post the data given to them from the molecular laboratories.

Loreche explained that when molecular laboratories release the results of the tests they conducted, these will be given to the Resu and local government units (LGUs).

The Resu will validate the data given to ensure there are no repeat tests and duplication, as well as to check that there is no double entry of names logged, while the LGUs will use the data for contact tracing purposes and not for media and public consumption, said Loreche.

The decontamination team of the Disaster Risk Reduction and Management Office will decontaminate the residences of the patients.

On the national front, for the second day in a row, the DOH reported an increase of more than 2,000 in confirmed Covid-19 cases.

Of the total, 32,845 are active cases, according to DOH Undersecretary Maria Rosario Vergeire.

Vergeire said cases in Metro Manila have been rising in the past two weeks while those in Visayas have been observed to be “slowly decreasing.”

“But we must continue to monitor the area if the decrease will be sustained,” she said.

She added that the government is focusing on NCR and Cebu, where clustering of cases has been detected.

Meanwhile, Vergeire said an additional 243 patients have recovered, increasing the number of recoveries to 12,185.

Six additional deaths were recorded, raising the death toll to 1,303. Five of the six deaths reported occurred in June.

Although cases are seemingly increasing at a faster rate, Vergeire said the national case doubling time as of July 3 was still around eight days, or 7.95 days. This is the length of time that it takes for confirmed coronavirus cases to double.

She said this means that the situation is “still manageable.”

Vergeire said the case doubling time was also computed at 7.95 days in Cebu City and 8.39 days in NCR.

Meanwhile, Vergeire said the country’s reproductive rate as of June 17 was 1.09. This means that an infected person can infect more than one person.

The DOH reported the biggest spike in infections in a single day on Sunday, July 5, when the country’s coronavirus count increased by 2,434 cases. (JJL, KFD, JKV, Marites Villamor-Ilano / SunStar Philippines)