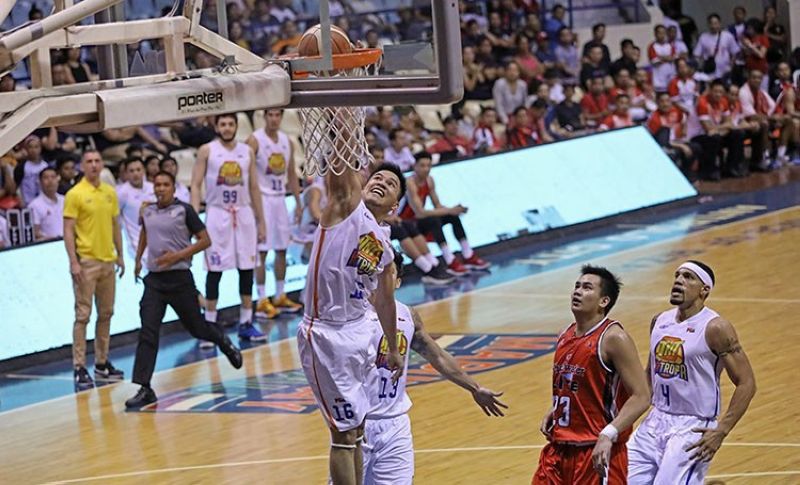 Current TnT star Roger Ray Pogoy believes he wouldn’t be in the PBA right now had he not gone to FEU and play in the UAAP. (PBA photo)

Any player who has any aspirations of making it to the Philippine Basketball Association (PBA) or even beyond should go and try their luck in Manila.

This was the sentiment of several Cebuanos who are playing or have played in the big league. The latest Cebuano to make the move to Manila is Cebu Schools Athletic Foundation Inc. (CESAFI) high school Most Valuable Player (MVP) Leobert Andrew “LA” Casinillo who made waves over the weekend with the news of his impending transfer from the reigning Cesafi champions Ateneo de Cebu to the University of Santo Tomas Tiger Cubs in the UAAP.

Casinillo is following in the footsteps of many Cebuanos who made similar moves in their career, such as former University of the Visayas Baby Lancers and current Blackwater Elite players Paul Desiderio and Ron Dennison and of course, Talk N Text KaTropa star Roger Ray Pogoy. Pogoy, in a talk with SunStar Cebu, said he believes he wouldn’t be in the position he is today had he not transferred from the University of Cebu to Far Eastern University.

“I might not have made it to the PBA since I wouldn’t have been able to focus on basketball all that much if I stayed in Cebu,” said Pogoy, who aside from being a perennial All-Star is also a mainstay of the Gilas Pilipinas men’s national basketball team. “I just might have focused on my academics and also, I also wouldn’t be as known unlike in Manila where you immediately get popular even after just one good game,” Pogoy added. Exposure and better competition — these are the benefits that can be enjoyed by anyone who plays basketball in Manila, says a number of players and coaches that SunStar Cebu spoke with for this article.

“The opportunity (to play high-level basketball) is really in Manila. Even before the players can play in the UAAP or the NCAA, they also get to play in other leagues like the Fr. Martins cup, Got Skills Tournament, Fil-Oil tournament, the D-League and invitational tournaments overseas,” said Ryan Betia, an assistant coach with both Far Eastern University and Blackwater. “So there are plenty of games which means more exposure and more opportunities for players to develop their skills. Not to take anything away from the Cesafi since they also have other tournaments there.

However, they’re only playing against the same opponents,” said Betia, who began his career as an assistant coach for the University of San Carlos. Another former PBA player who went through a circuitous route before making it to the big stage, said that if he had to go do it all over again, he would have gone to Manila sooner rather than later.

“Dapat sa high school pa lang, sa Manila na sana ako. It would have given me more than enough time to adjust to how Manila players play,” said Macmac Tallo, who played for TnT and NLEX before making his way to the Maharlika Pilipinas Basketball League (MPBL) where he currently plays for Bacolod.

“You have to make a name for yourself in either the NCAA or UAAP as early as possible. The PBA is in Manila so why not go closer right? The road is very difficult if you’re playing college in Cebu and then you go to the D-League and maybe the PBA.

Even I had trouble adjusting and learning a whole new system when I moved to Manila. So yung confidence mo is parang low na kaagad. Kaya if nandito ka na habang bata pa, eh di madali nalang,” explained Tallo who went back home to play for Southwestern University-Phinma in the Cesafi after stints with Ateneo and La Salle in the UAAP. Tallo believes that if he stuck it out in Manila, he would have made it to the PBA a lot sooner.

“I might have made it into the PBA at 21 years old and would still be playing there right now. Based on my experience, the competition in Manila is really fierce and there is no time to relax. I believe that’s what I lacked here in Cebu. We know na ang competition sa Cebu is not the same sa Manila,” Tallo added.

Tallo’s sentiment was shared by current NLEX big man William McAloney. After helping the University of San Carlos win the Cesafi title in 2015, the 6-foot-5 forward spent the next four years playing in “panalay” leagues and the Cebu team in the MPBL before finally getting drafted by NLEX in last year’s PBA Draft.

“All the exposure is in Manila. You have the opportunity to be seen by many coaches on your way to the PBA. I think I could have made it a whole lot sooner if I were in Manila but it’s okay. I believe everything happens for a reason,” said McAloney.

McAloney’s teammate on the Cebu team — Joel Christian Lee Yu — said having scouts and coaches at every game in Manila helps out a lot. “If naa ka sa Manila, in Bisaya terms pa, ‘duol nakas luwag,’” said Lee Yu, who also moved from USC to play for FEU.

“No offense to Cesafi or sa Cebu in general but if you’ll stay there, your game will stagnate since after the season ends, there’s no other league to play in other than ‘panalay.’ You won’t grow as a basketball player,” added Lee Yu. (JNP)