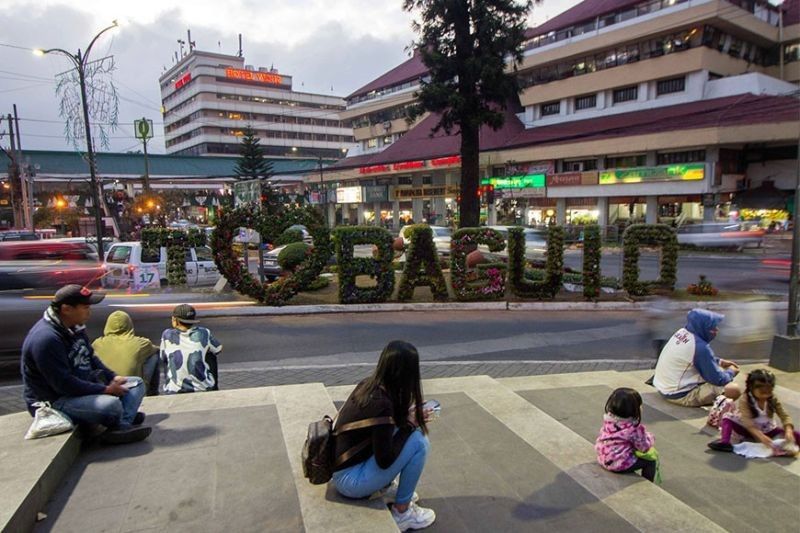 BAGUIO. Amid the threat on the 2019 novel coronavirus, Baguio City residents take time to relax at the Peoples’ Park while enjoying the view of the newly landscaped central island going down Session Road. The landscape is part of the carpet of flowers landscaping exhibition and competition of the Baguio Flower Festival. (Photo by Jean Nicole Cortes)

After being denied entry to Sagada, Mountain Province and Banaue in Ifugao, Camp John Hay Manor confirmed the stay of the team with actor Piolo Pascual to shoot scenes for the State of the Nation Address (Sona) of President Rodrigo Duterte.

City Mayor's Office Chief-of-Staff Philip Puzon said the team registered at the HDF website [http/hdf.baguio.gov.ph] of the city for pass through travel for their Sagada trip over the weekend and was escorted outside the city limits.

Puzon said for their return to the city, the team also went through the Teachers Camp Triage following procedure of the city and were later given a certification, which enabled the group to enter Camp John Hay.

As of press time, Puzon said it is unclear if the team acquired the necessary permits to shoot in the city as these are being handled by the City Administrator's Office.

Puzon said there are no violations from the film team with their stay in the city.

Meanwhile, both the Department of Tourism-Cordillera and the City Tourism Office said the team of Bernal did not coordinate with their offices for the supposed shoot.

Bernal and crew drew the ire of netizens after trying to shoot Sagada, Mountain Province despite a denial of their request from the local government unit.

They arrived in Sagada Sunday, July 5, and went past checkpoints with travel passes from the Palace.

Sagada Mayor James Pooten said the crew were asked to leave the highland town on Monday morning, July 6, despite having travel papers and authorization from Malacanang for the sake of the health its people.

Pooten said health and safety of his town have to be put at outmost priority, adding no amount of permits and authorization can sway the decision of its stakeholders to keep the town sealed from tourists.

After the Sagada rejection, the team travelled to Banaue, Ifugao, where they were also not allowed to enter.

Bernal was scheduled to shoot footage for the Sona in Batad, but the Banaue local government stood its ground, citing health of the community, showing an executive order by Mayor Wes Dulawan, in effect prohibiting travel to and from Banaue to keep the town Covid-free.

Dulawan has prohibited travel in and out of Banaue from July 3 to July 10 because of a positive Covid-19 case in the town.

From Mt. Polis, the Philippine National Police personnel escorted Bernal out of Banaue.