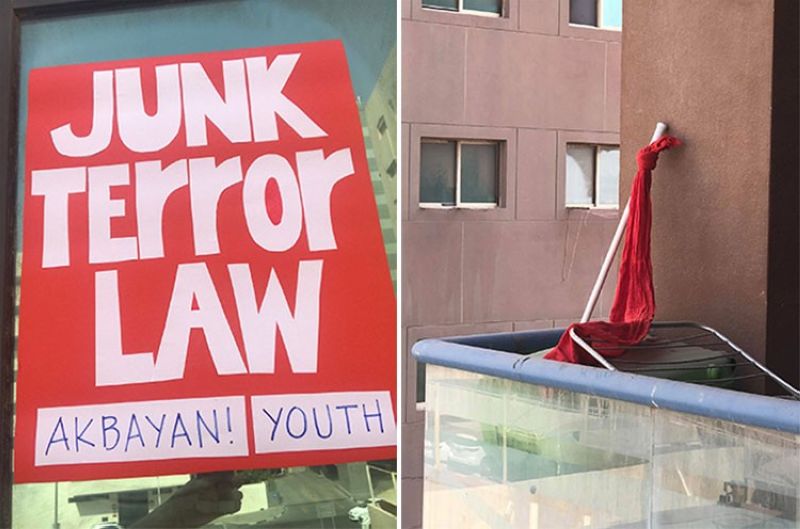 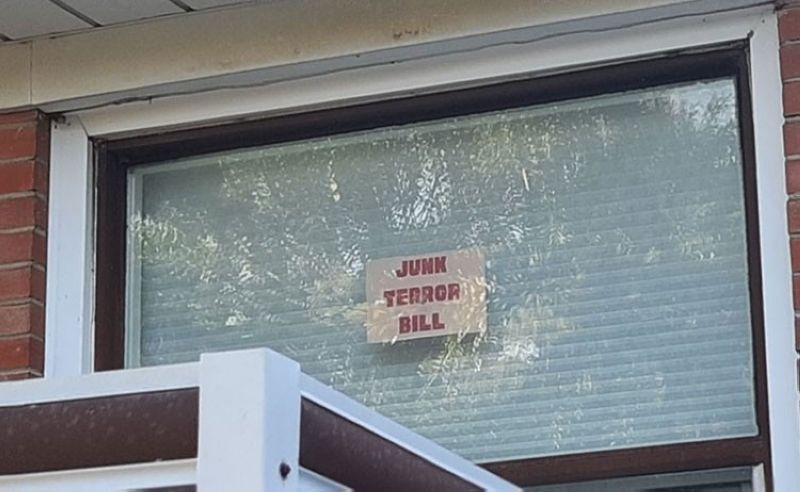 JUST four days after President Rodrigo Duterte signed the repressive Anti-Terror Bill, a loose community of both organized and unorganized Filipinos from abroad took to their windows and balconies with placards and red cloth as a creative protest against the law.

On July 7, 2020, Filipinos from Canada and Dubai hung and taped card stock plastered with “Junk Terror Law” and “Activism Not Terrorism” on their windows and balconies, following two key slogans of the homeland opposition against the Terror Bill and, more broadly, the active crackdown on progressive organizations and individuals.

Those who did not have resources at home for a placard hung red cloth for symbolism instead, and spread the word to their social circles.

Besides common friends, protest participants were brought together by a shared frustration over not being able to directly help the on-ground situation in the Philippines, particularly with regard to the recent indignation rallies that happened on July 4 and July 7 in UP Diliman.

“I felt helpless and was itching to do more than partaking in online rallies and signing petitions,” one of the participants, a current Dubai resident, said. “When I found red card stock lying around in my room, I realized I had just the materials to replicate a placard and feel like I brought it to the UP Diliman protest with the activists who personally went there.”

Protesters meant to send one message: In spite of the Terror Bill, the fake news provision in the now-expired Bayanihan Bill, and other attempted legislation of the like, freedom-loving Filipinos will continue finding ways to resist if it means protecting the rights they’re due.

Protesters also hope to inspire other Filipinos, particularly those abroad who face no direct security risk or repercussions for these acts of protest, to join and speak up against the Terror Bill before its 15-day leeway period for implementation.

“Recently, there’s been a lot of division between Filipinos who live in the Philippines and Filipinos who live abroad with regard to who cares more about local history and culture,” one protester under the pseudonym of Lee Harper said, pertaining to the groups’ recent heated exchanges on Twitter and Facebook. "But really, now is not the time to be divided."

“History is not just a static, distant phenomenon; it is happening right now. This is the Martial Law equivalent of our time if not worse. We need the local and international Filipino community both to set their infighting aside, and instead rally united against this threat to democracy,” he said. (PR)