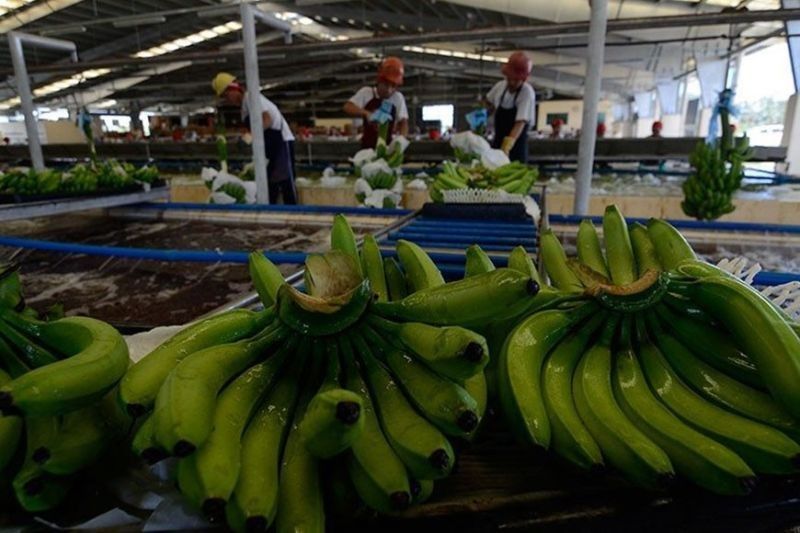 THE coronavirus disease (Covid-19) pandemic has not stalled the export of Philippine bananas but the Pilipino Banana Growers and Exporters Association Inc. (PBGEA) still expects a 20 percent drop in banana export for 2020 due to a different disease.

In a virtual press conference, PBGEA chair Alberto Bacani said that Cavendish banana export is down by 20 percent as of May this year.

"We are projecting it to remain on more or less that 20 percent difference all the way until the end of the year," he added.

Bacani said the decade-old problem of Panama disease has been keeping the banana production low.

He said it was even worsened by the increasing competition in the international banana market and discouraging export policies currently in place.

A huge drop in export was recorded in China, which has become a huge market for the Philippine banana for the last two years, surpassing Japan.

Based on their data, the Philippines projected only 58.7 million boxes to be exported this year compared to the 73.6 million boxes in 2019.

"It is driven by the overall reduction in the total production of the industry and the entry of Latin American bananas into China and even neighboring countries of China like Vietnam, Laos. Myanmar. They are eating up the share of the Philippines in China," he said.

"The total import banana market in Japan has gone up in the last five years but what has happened is that our share has reduced," he said.

Based on their data, Latin America's banana market share in Japan increased from 9 million to 14 million in the last four years.

"Latin America is definitely a threat to us in Japan," Bacani said.

In Korea, the main hurdle for the association remained to be the high tariffs which Korea continued to impose a 30 percent tariff on the Philippine banana imports while easing tariff requirements of bananas coming from Vietnam to 12 percent this year from 15 percent in 2019.

Korea has also removed the tariffs on imported bananas from Colombia from six percent in 2019.

"The 30 percent tariff is a huge disadvantage to the Philippine bananas to go to Korea. This is going to discourage importers from getting from the Philippines because of the very big import tariff compared to these other Latin American countries," Bacani said.

"Our bananas are still the best option for Asian and Middle East markets. Unfortunately, we are facing so many challenges in the Philippines like disease and peace and order, while other banana-producing countries are doing everything to take away our markets from us by reducing prices through means like negotiating for reduced duties and providing subsidies," he added.

Bacani has asked the government to help the industry to combat Panama disease by establishing a research institution devoted to bananas and by forging bilateral agreements with other countries like Korea to reduce tariffs.

He said the association has begun surveying the still Panama disease-free tracts of land in the Bangsamoro Autonomous Region in Muslim Mindanao (Barmm) and some areas in Agusan and Surigao as expansion areas.

He added they are also keen on planting the Fusarium-wilt tolerant Giant Cavendish Tissue Culture Variety (GCTCV-218) to recover the infected areas.

Department of Agriculture (DA)-Davao Region Director Ricardo Onate shared that they have closely coordinated with the Province of Davao del Norte and the local government units to address abandoned lands, especially in Kapalong and Talaingod.

PBGEA is an association composed of 24 banana-exporting companies present in 16 provinces in Mindanao and 50 percent of the total land area is planted with export variety bananas.