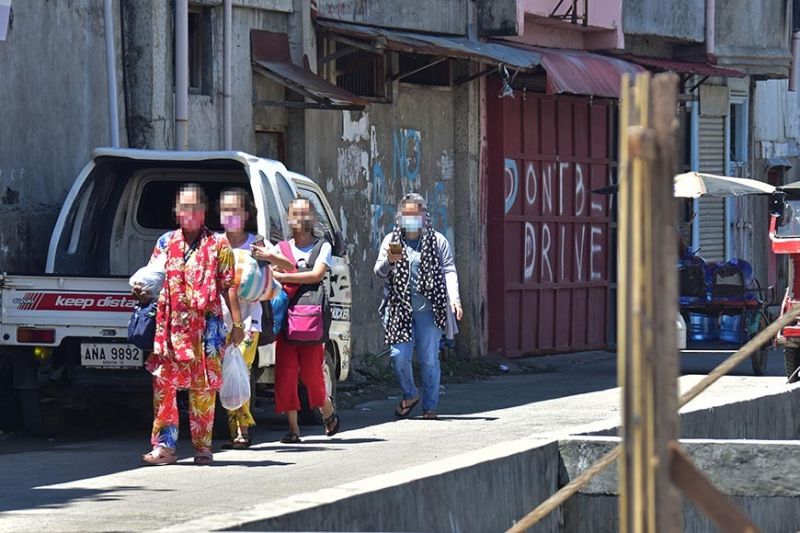 "Dili ta musugot nga inig human sa lockdown, basta nalang sila mamalik. Dili ta musugot ana. Maong naka-scheduled ta makig-istorya sa mga barangay officials nga kung dawaton ni sila, dapat muagi ni sila sa health screening (We will not allow them to return to their homes once the lockdown is lifted. That will defeat the lockdown's purpose. I will have a scheduled meeting with the barangay officials. If they are planning to allow them to return, then they must first undergo a health screening)," Sumagaysay said.

He said there is a need for a lockdown in the area due to the increasing number of coronavirus disease (Covid-19) patients in the barangay.

Prior to the lockdown, Sumagaysay said they conducted a series of meetings with the barangay officials before the lockdown was implemented.

With this, he said residents were no longer surprised with the lockdown because the barangay informed them in advance.

Davao City Mayor Sara Duterte-Carpio confirmed this in a radio interview on Monday, July 6 as she cautioned the public from accepting residents from 23-C.

Sumagaysay, however, clarified that some who left the barangay are transient residents.

He added that some of them were able to secure travel authority from the Davao City Police Office and then decided to return to their respective point-of-origin after the lockdown was announced.

Four days since the lockdown was imposed, Sumagaysay said they have not reported any untoward incident and that majority of the residents have been cooperative.

Sumagaysay said this is, by far, the largest area the security has secured since the localized lockdown was implemented.

Based on the data from the City Social Welfare and Development Office (CSWDO), he said an estimated 18,000 individuals or around 5,000 families are affected by the lockdown.

However, Sumagaysay assured that the lockdown was carefully planned.

"Ang ato lang man objective diria is mawala ang Covid-19 cases sa sulod. Wala tay tumong na palisdan sila ani atong lockdown (Our objective in this lockdown is to mitigate the spread of the Covid-19 virus within the community. The lockdown is not meant to give inconvenience to the residents)," Sumagaysay said.

Meanwhile, CSWDO, along with other City Government offices, delivered assorted fresh products gathered from donations of the farmers.

City Agriculturist Leo Brian Leuterio said his office gathered a total of 480 kilos of assorted vegetables from farmers who donated to the residents of Barangay 23-C.

"The vegetables were donated by kind-hearted farmers of Marilog and the Davao Food Terminal Complex as food aid to the residents of Barangay 23-C," Leuterio said.

He said his office is also awaiting some 200 kilograms additional assorted vegetables from other farmer organizations in the city to be delivered anytime soon.

Dr. Cerelyn Pinili, chief city veterinarian, said her office also distributed 2,000 pieces of dressed chicken to the area as initial assistance. She said that milk and another round of dressed chicken will be delivered next week.

CSWDO, as of July 8, has already delivered 6,266 grocery packs to targeted beneficiaries in Barangay 23-C.

Data from the Department of Health-Davao Region as of July 6 showed a total of 89 Covid-19 cases in the barangay. Of this number, 39 are active cases while 48 have recovered, and two have died. (RGL/With reports from CIO)