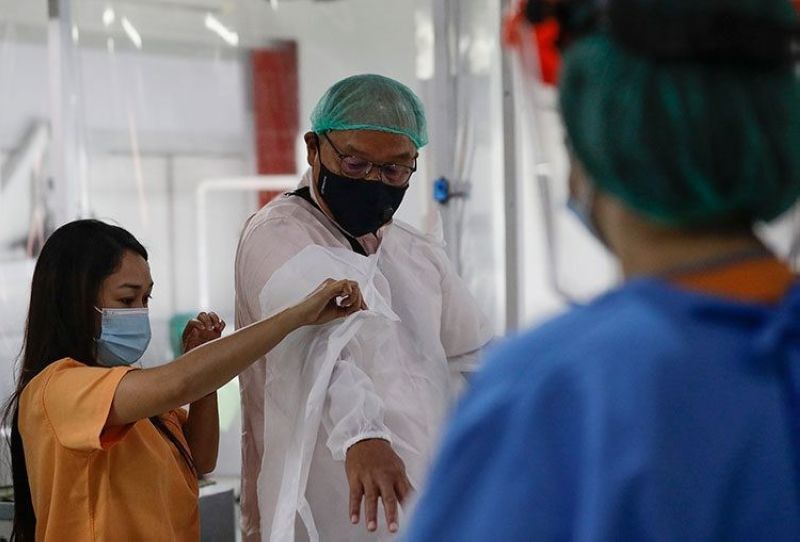 MANILA. A patient is assisted as he takes off his protective suit to prevent the spread of Covid-19 after getting a dental procedure at a clinic in Manila, Philippines on Monday, July 6, 2020. (AP)

THE Department of Health (DOH) reported a new record high of 2,539 coronavirus cases in a day, bringing the total case count to 50,359.

The agency said clustering of cases was observed in six new barangays in NCR, and in an additional one barangay each in Cebu City, Mandaue City, Palawan and Albay.

Confirmed cases at the Metro Rail Transit Line 3 (MRT-3) also increased to 202 Wednesday from 198 on Tuesday. DOH said there was also an increase in the number of cases at a construction site.

DOH also reported 202 additional recoveries, bringing the total to 12,588, and five additional mortalities that raised the death toll to 1,314.

Of the five deaths, DOH said two occurred in July.

Fresh cases refer to test results that were released in the last three days while late cases are those that came out at least four days ago but were validated by the Epidemiology Bureau only in the last 24 hours.

DOH Undersecretary Maria Rosario Vergeire earlier said the case count is expected to rise further because of the continued community transmission and increase in testing for Sars-CoV-2, the virus that causes the coronavirus disease 2019 (Covid-19). (Marites Villamor-Ilano/SunStar Philippines)