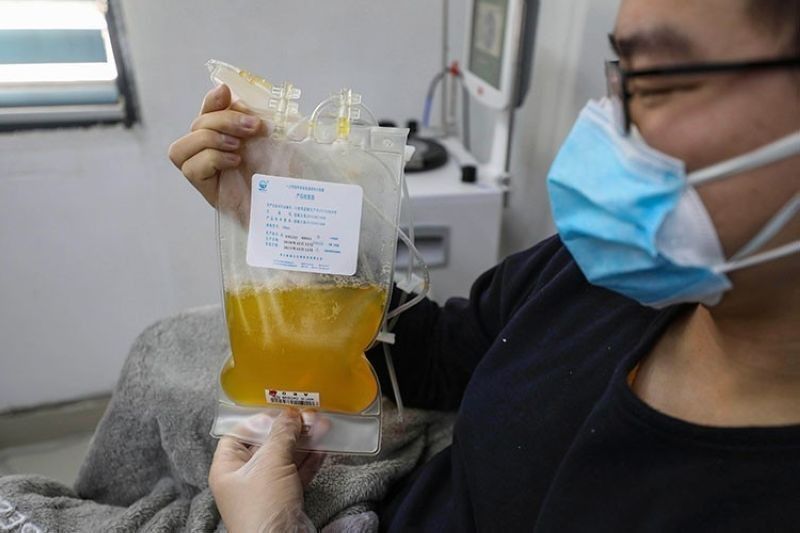 THE Department of Health (DOH) 7 condemned the sale of blood plasma to the coronavirus disease 2019 (Covid-19) patients, and the illegal trade reportedly has been happening in Cebu City and in some private hospitals.

The village chief of Barangay Luz blamed some “Chinese nationals” for buying blood plasma from residents who recovered from Covid-19. Luz is one of the barangays hit hard by the Cebu City Covid-19 epidemic.

Selling blood plasma is discouraged as it taints the culture of blood donation, which must be done voluntarily, said Dr. Mary Jean Loreche, DOH 7 spokesperson for Covid-19 updates.

Loreche confirmed on Wednesday, July 8, 2020, that the DOH 7 had received reports on the blood plasma trade. Reports on plasma sale at P80,000 per bag in Barangay Luz, Cebu City have been making rounds in social media.

The health official said they will seek help from law enforcers after the DOH 7 obtains evidence.

Luz Barangay Captain Ronilio Sab-a said he was told that there were Chinese nationals who went directly to the residents who survived from Covid-19 and asked them to donate their blood plasma.

The residents who agreed to donate their blood plasma were fetched from their homes and taken to hospitals where extraction and transfusion occurred.

Sab-a said he was not able to make a legal move against the alleged buyers, saying there were no complaints.

Sab-a said he was personally asked by some government officials to look for residents who were willing to donate their blood plasma.

He said one resident agreed to donate. The donor did not ask for a payment, but the family of the government official insisted on paying the resident.

Sab-a is set to launch an investigation on residents who recovered from Covid-19 for allegedly selling blood plasma at a high price.

He will also conduct an information drive, reminding his constituents who are Covid-19 survivors not to sell their blood plasma as it is unlawful.

Luz’s Barangay Council will tackle the issue in its session on July 11.

Mayor Edgardo Labella has directed the Cebu City Health Department to conduct an inquiry on this issue and submit its recommendation to him.

Plasma is the liquid portion of the blood. About 55 percent of blood is plasma and the remaining 45 percent are red blood cells, white blood cells and platelets that are suspended in the plasma, according to redcrossblood.org.

Loreche said convalescent plasma can help boost the immune system of a critically ill or a severely impaired person admitted because of Covid-19. However, there is no proof yet if this can cure a Covid-19 patient.

The process involves the transfusion of a recovered Covid-19 patient’s blood plasma to sick a Covid-19 patient. The removal of plasma from either a donor or a patient is done through the use of an apheresis machine, which receives blood removed from a patient or donor’s body and separates it into its various components: plasma, platelets, white blood cells and red blood cells.

Loreche said all commercial blood banks were closed because there were unhealthy paid donors.

She said there were donors who lied about their real condition so they can sell their blood to patients in need.

The public can report the blood plasma trade to the DOH 7 and its licensing division will conduct an investigation.

The DOH Subnational Blood Center for Visayas is the only licensed convalescent plasma facility in the region.

The discharged/recovered patients (those admitted in hospitals after they were diagnosed positive for Sars-CoV-2, the virus causing Covid-19, through reverse transcription polymerase chain reaction test), and those asymptomatic patients who recovered and whose body has produced enough antibodies called immunoglobulin G (IgG) can donate their plasma.

Loreche said there are two ways of preparing convalescent plasma: through the apheresis procedure and through the regular blood donation process.

For the procedure involving apheresis machine, only the plasma will be removed from the blood while the other components will be returned to the blood. It has to be transfused to the recipient immediately after the blood is extracted.

Before the actual extraction procedure, a sample from the donor’s blood—about five to 10 milliliter (ml)—had to be examined first to find out if it is free of other illnesses such as hepatitis B, hepatitis C, human immunodeficiency virus, malaria, syphilis and Covid-19. If the blood sample passes the tests, extraction will follow.

The process in the regular blood donation involves the extraction of 450 ml of blood from the donor. Afterwards, the sample will be tested for other diseases and if found negative, this will be processed according to its components. The platelets are for dengue patients and the fresh frozen plasma are for Covid-19 patients.

The plasma acquired through regular blood donation will be freezed in -18 degrees centigrade; it can be stored for a year, making available any time in 365 days. (WBS & JJL)