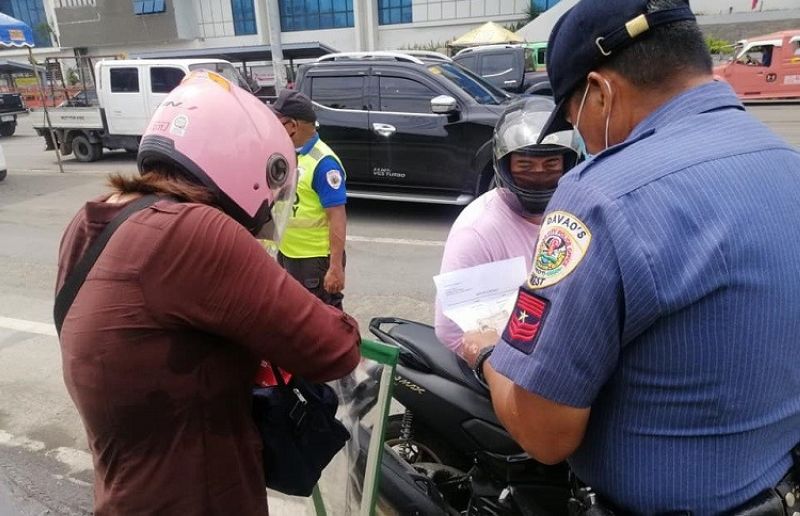 THE Davao City Police Office (DCPO) only warned erring motorists for violating the health safety standard for backriding on its first day of implementation on Friday, July 10, 2020.

This came on the heels after Interior and Local Government Secretary Eduardo Año announced on Thursday, July 9, that motorcycle backiding will be allowed for couples living in the same house in areas under general community quarantine (GCQ) or modified GCQ.

Año also said the National Task Force (NTF) Against Covid-19 has approved the prototype proposed by Bohol Governor Arthur Yap, which requires the installation of a barrier between the driver and the passenger.

However, DCPO Director Police Colonel Kirby John Kraft told SunStar Davao in a phone interview that they have warned some riders for not placing the required barriers.

He also said they issued a warning to some couples who had an improvised shield installed between them but is not similar to the prototype approved by the IATF although he said the majority of them had proof documents that they are living together.

Kraft said they did not apprehend anyone yet because they are still conducting an information campaign, especially on the appropriate barrier to be used.

"Dahil unang araw nga, so medyo mayroong kaguluhan ito, especially kung anong klaseng barrier ba ang dapay gamitin. So naging lenient nalang muna tayo (because it is the first day of the implementation, we expected some confusion, particularly on what kind of barrier they should be using. We had to be lenient for now)," the DCPO official said.

Meanwhile, he said that motorists can expect long lines at checkpoints because the police will thoroughly screen them.

Davao City Mayor Sara Duterte-Carpio said in a radio interview on the same day that they have been receiving queries on what specific barrier that will be allowed.

Duterte-Carpio said the City Government will release an alternative barrier which is considered "better."

"Katong isa ka barrier man gud nga gi-attached pud sa [DILG] memo is dili siya safe para sa passenger and rider (The model, which was attached in the memo, is not safe for both the passenger and the driver)," she said in an interview via 87.5 FM Davao City Disaster Radio.

Despite an appeal from some riding motorists to lift the mandatory barrier, the mayor said they cannot do that because it is an order from the Inter-Agency Task Force for the management of Emerging Infectious Diseases (IATF-EID).

"It came from the national government ug IATF. So kung IATF, approved na siya gina implement nato na diri sa syudad sa Davao. Kung duna sila’y requirement na barrier, mao ang atoang sundon (because it came from the IATF, we have to implement. If they required a barrier, we have to follow it)," Duterte-Carpio said.

The mayor said only married and live-in couples living in the same house are allowed to backride but they must present a valid ID with either a similar surname or the same address. But she also said that for as long as there is a barrier, the relationship status between the two passengers should not matter.

Duterte-Carpio, meanwhile, clarified that motorcycle taxis (habal-habal) are not allowed because it is illegal for them to operate.

Kraft said they will be strictly imposing the back ride policy and violators will be penalized under Republic Act No. 11469 or the Bayanihan to Heal as One Act.