House's ABS-CBN franchise decision 'not in line' with evidence presented 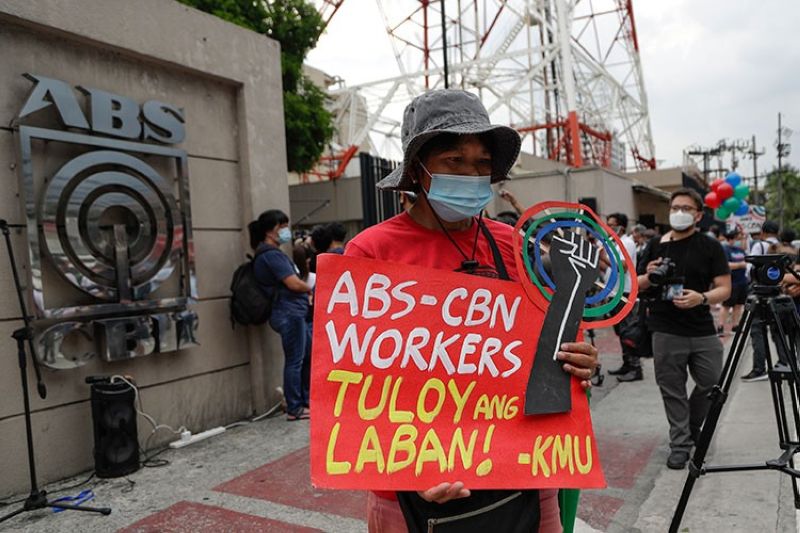 MANILA. A supporter holds a slogan that reads: "ABS-CBN workers, Fight continues" during a rally outside the ABS-CBN headquarters in Quezon City, Philippines, Friday July 10, 2020. (AP)

SEVERAL legislators have expressed dismay over the House of Representatives' decision to junk the bills seeking to provide ABS-CBN a new franchise.

But for Cagayan de Oro Second District Representative Rufus Rodriguez, the recommendation made by the Technical Working Group (TWG) was not in line with the evidence presented during the 12 hearings.

“The findings of the TWG are contrary to the evidence presented during the 12 hearings. The TWG set aside what was proven in the hearings that the ABS-CBN complied with all provisions of our Constitution statutes and regulations,” Rodriguez said in a Viber message.

Albay First District Representative Edcel Lagman supported this, saying the network’s franchise was junked despite being able to answer allegations against it.

“The protracted hearings conducted by the Committees on Legislative Franchises and Good Government followed a foregone conclusion, and despite ABS-CBN surviving the grueling legislative inquisition, it was slain at the end of the show with premeditation and abuse of superiority in numbers as aggravating circumstances. The TWG was part of the charade,” Lagman said.

Magdalo Party-List Representative Manuel Cabochan stressed that ABS-CBN proved that it did not commit any tax violations.

“As the proceedings both in the Senate and the House have revealed, ABS-CBN had no tax violations or any pending case to prevent its renewal of franchise. All requirements concerning its franchise are also complied with. So in spite of the senseless accusations and scrutiny on the franchise renewal, it was clear in the hearings that ABS-CBN had no existing violations and cases, and yet, its franchise was denied. If all other accusations and nitpicking are indeed valid, then there are courts to deal with them instead,” he said.

ACT-Teachers Representative France Castro said the denial of the network’s franchise is “a clear attack on press freedom.”

“This is a clear attack on press freedom and the people’s right to information. Napakalaki ng epekto ng pagpapasara ng ABS-CBN sa 11,000 niyang mga empleyado at milyon-milyong mamamayang Pilipino na mawawalan ng access sa balita at impormasyon (It has a very big impact on the 11,000 employees of ABS-CBN and millions of Filipinos who will lose access to news and information),” she said.

Kabataan Party-List Representative Sarah Elago also slammed the House vote, saying the 12 hearings for ABS-CBN’s franchise renewal was “nothing but a show.”

Lawmakers at the Senate also condemned the decision, with Senator Risa Hontiveros calling it an “outrageous act of political persecution.”

"At a time when Filipinos are sick, jobless and hungry, history will judge those who tried to silence the truth. History will be harsh to those who ignored the most basic needs of Filipinos during this pandemic and instead used it to consolidate power for selfish reasons," she said.

"The political persecution of ABS-CBN sends a chilling message to Filipino media practitioners and journalists: toe the line or get shut down. May takot at pagbabanta ang mensaheng inihahatid ng gobyerno: kapag kaaway ka, pwede kang ipasara," she added.

After monitoring the 12 hearings, Senate Minority Leader Franklin Drilon said that ABS-CBN’s only fault was that it “stepped on some powerful political toes.”

“After monitoring the exhaustive proceedings in the House of Representatives, I am more convinced that the only fault of ABS-CBN is it stepped on some powerful political toes, hence the sword has been unleashed on it,” he said.

Senator Grace Poe, who chairs the Senate committee on public services, believes that the House panel had a “high and unforgiving” standard.

“ABS-CBN is far from a perfect organization, and has admitted to its many failings. But in its balance sheet of accomplishments, the good it had done for our people are valuable,” Poe said.

Senator Sonny Angara stressed that the shutdown of the network would impact the economy.

The 11,000 employees who lost their job due to the network’s shutdown will only pile up with the seven million jobless Filipinos, according to Senator Francis Pangilinan.

Despite numerous concerns over the House panel’s verdict, the Malacañang has maintained a “neutral” stance on ABS-CBN’s franchise application.

"The Palace has maintained a neutral stance on the issue as it respects the separation of powers between the two co-equal branches government," Presidential Spokesperson Harry Roque said in a statement.

"Much as we want to work with the aforesaid media network, we have to abide by the resolution of the House committee," he added.

Seventy congressmen in the House panel voted in favor of ABS-CBN’s shutdown, while 11 wanted the network to continue operating. Two lawmakers inhibited and one abstained.

The House of Representatives has yet to release the official breakdown of votes. (SunStar Philippines)