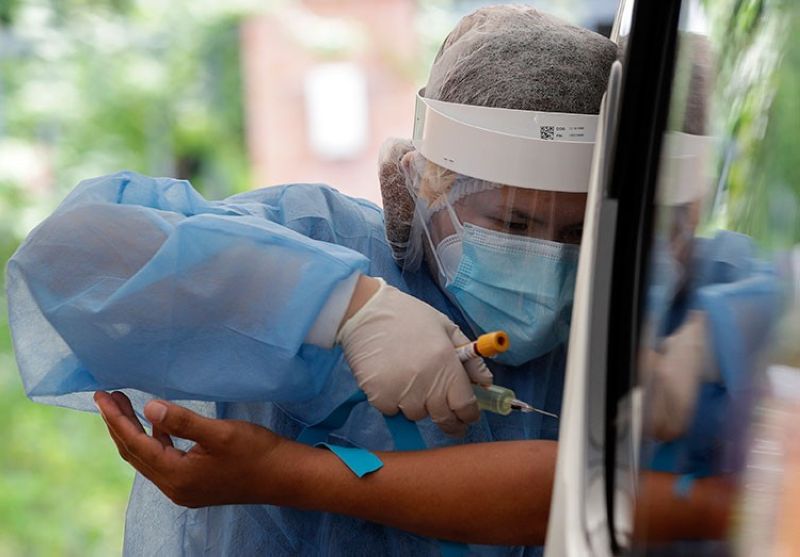 MANILA. A health worker takes blood to perform an Enhanced Chemiluminescence Immunoassay antibody test at a drive-thru Covid-19 testing facility at a hospital in Manila, Philippines on Wednesday, July 8, 2020. (AP)

THE Department of Health (DOH) reported Saturday, July 11, the highest number of patients who have recovered from coronavirus disease (Covid-19), with 807 new recoveries in one day.

This brought the total number of recoveries to 14,037 as of Saturday, and this is higher than the 489 recoveries set last July 5.

The health department, however, said that 1,387 more people have been infected, bringing the country's total to 54,222.

"Today's fresh cases are based on the daily accomplishment reports submitted by only 71 out of 79 current operational labs," said the DOH in its latest case bulletin.

Of the 918 fresh cases, or those whose test results came out and were validated by the DOH-Epidemiology Bureau in the last three days, 261 are from the National Capital Region (NCR), 62 from Central Visayas and 595 from other regions.

Of the late cases, or those whose laboratory results came out four days ago or more but were just recently validated by the DOH, 178 are from the NCR, 15 from Central Visayas, and 276 from other areas.

The DOH also reported 12 additional deaths that brought the total number of mortalities to 1,372.

It said that of the 12 deaths, 9 (75 percent) were recorded in April, one or eight percent in May and two or 17 percent in July.

The deaths were from Calabarzon (five deaths or 42 percent), Central Luzon (four or 33 percent), and NCR (one or eight percent), while the two deaths recorded in July came from Central Visayas.

The DOH said 79 duplicates were removed from the total case count.

"The total cases reported may be subject to change as these numbers undergo constant cleaning and validation," it added.

In an earlier press forum, DOH Undersecretary Maria Rosario Vergeire said that they have formed an "Oplan Recovery" team tasked to check on Covid-19 patients that are under home quarantine.

"You would be seeing a trend that the numbers will really go up. It's because we are continuously validating all of the cases that were confirmed positives but we do not have any outcomes at all now because there have been no reports," said Vergeire.

Previously, the health official said the Barangay Health Response Teams (BHERTs) have been overwhelmed by the number of Covid-19 patients that they have to monitor while under home quarantine.

"The BHERTs have already been unable to check home quarantined patients if they have recovered or have died because of the disease," noted Vergeire. (LMY/HDT/SunStar Philippines)