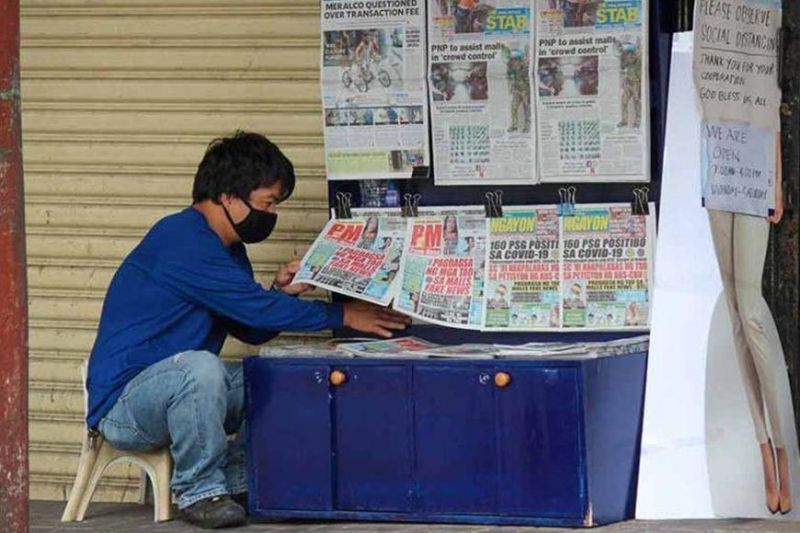 OFF THE AIR. The Covid-19 pandemic raised anew many citizens’ dependence on legacy media — newspapers, radio, and television — for information and explanations to cope with drastic changes affecting health, livelihood, mobility, and life in general. Congress’s decision to deny the ABS-CBN’s bid to renew its franchise reverberates among Filipinos already unsettled by the pandemic and economic dislocation. (File photo)

MARGARETTA was informed by the man delivering her daily newspaper to her that, with Cebu City placed under enhanced community quarantine (ECQ), he would not be able to do so anymore.

Skipping her newspaper habit, though, did not upset the 87-year-old widow too much as she had radio and television to update her about the progress of the coronavirus disease 2019 (Covid-19).

She preferred to watch the nightly news roundup on the ABS-CBN network. In their barangay, her household was one of those selected to receive the TV Plus box, which improved the reception and access to programs for Margaretta and her daughter, making them loyal regulars to the network. After the trial ended, they retained the gadget.

From her late husband, she continued the habit of listening and then falling asleep to the evening broadcast of dyAB, the AM station of the ABS-CBN network, issuing from the portable radio the couple bought from a now defunct appliance store on Manalili St.

When the network went off the air during evening news transmission on May 5 and then shifted to streaming the news on its YouTube channel, Margaretta and her daughter, in her 60s, felt their day immeasurably altered for the first time since the ECQ dried up the delivery of the local daily.

Although Margaretta and her daughter read the same daily for more than two decades, it has not become a personal or familial fixture, part and parcel of their domestic life, unlike radio and television.

For a generation of audiences weaned on legacy media, print appeals more to the rationality and intellect while radio and television have qualities—such as broadcasters and actors with unforgettable voices and faces, tics and manners of dressing—creating an intimate and emotionally resonant impact, heightened by the presence of radio and television being present in major events dramatically affecting people, such as crime, fire, road accidents, natural disasters, political upheavals, and pandemics.

Margaretta and her elderly daughter are unable to make the seamless transition from legacy broadcasting to digital media. It is not just that they lack the new media literacy to navigate the Internet. Dependent on Margaretta’s pension as a retired public teacher, they can ill afford a gadget and load on data. Their access to digital media is barred by the no mean incident of their demographics.

The pandemic, which preoccupies them for these past months, cuts them off from the flow of information, heightening their anxieties and disorienting the widow. Once at dawn, her daughter found her mother had left the house to go to the wet market at the street corner, asking the fish sellers when the “TV news” would be back. She had forgotten to wear a mask.

The July 10 decision of the Congress to deny the ABS-CBN network’s application for a renewal of their franchise has put at least 11,000 employees of the network out of work at a critical period when all businesses are suffering losses and laying off workers due to the prolongation of the community quarantine.

Citizens express fears of the strangulation of civil liberties, with the conviction of Rappler journalists for cyber libel and the passage of the Anti-Terrorism Bill into law still fresh on their minds. Looming over these is the Marcos imposition of martial law and its bitter lessons.

For citizens like Margaretta, the termination of a preferred radio and TV network in the midst of a health disaster has the same gut-level impact as the loss of financial security and fears of political repression and civil rights violations.

“Switch channels” or “go digital” may be logical, practical responses to current realities. Yet, for citizens beyond the reach of signal transmissions, internet reach, digital resources, new literacy, and economic resources, the end of the ABS-CBN franchise is the cut that goes to the core, disconnecting and setting them adrift, no certainty in sight, only anomie.