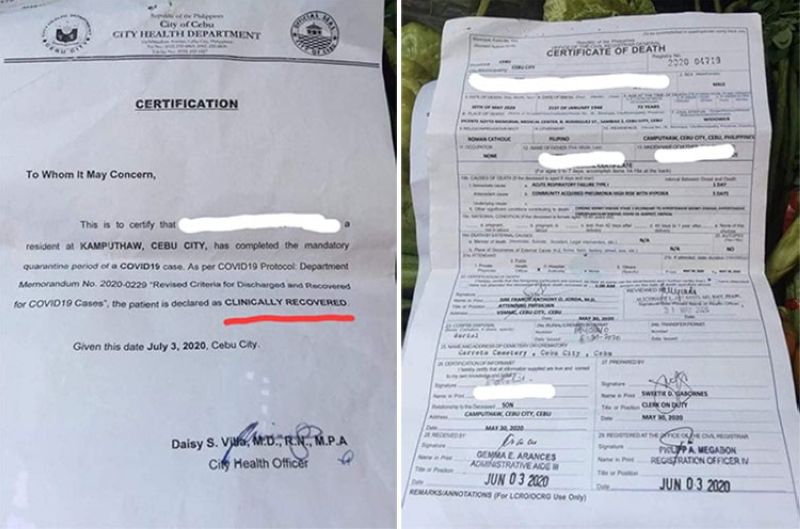 A 72-YEAR-OLD resident of Barangay Kamputhaw in Cebu City, who died on May 30, 2020, was certified as clinically recovered from the coronavirus disease 2019 (Covid-19) on July 3.

Stephanie Ang, granddaughter of the deceased, shared on Facebook (FB) pictures of his death certificate, burial and the health clearance showing the patient clinically recovered from Covid-19. The images have circulated on social media with several netizens questioning the City Health Department’s (CHD) for the discrepancy.

Vice Mayor Michael Rama, who chairs the council’s health committee, wants to know what happened, saying facts and data should have been reconciled.

“That is a serious thing to really fathom. How did it happen?” he said.

Dr. Daisy Villa, CHD chief, explained during an interview with radio broadcaster Juril Patiño that a barangay health worker (BHW) assigned in Kamputhaw submitted a list of clinically recovered patients to one of the CHD doctors. (Patiño posted the transcript of the interview on his FB page.)

The doctor from the CHD forwarded the list to the CHD for the printing of certificates, countersigned by one of the CHD doctors. The certificates were then sent to the BHWs for distribution, Villa said.

When the discrepancy was discovered, the BHW had already delivered the certificate to the family, she said in Cebuano.

Villa also admitted that the matter was not addressed immediately since they only have three doctors at the CHD as the others are on quarantine.

Ang said they were not informed that her grandfather contracted the disease.

She said their family was surprised when health workers went to their house on June 2, three days after her grandfather died, to take a swab sample.

Then they were told her grandfather had Covid-19 even though the health workers did not have any documents to prove he had been positive, she said.

When her grandfather was confined in the hospital in May, Ang said his doctor told them he was only a suspected Covid-19 positive since he had difficulty in breathing, which was one of the disease’s symptoms.

SunStar Cebu tried to reach Villa, to no avail.

In Barangay Guadalupe, a doctor was also surprised to see her name on the list of Covid-19 patients even though her swab result came back negative on July 1.

Barangay Councilor Apol Enriquez, chairman of the barangay committee on health and head of the barangay health emergency response team, said they only followed the list given to them by the CHD.

Enriquez discovered the discrepancy during the contact tracing the barangay conducted on Saturday, July 11. (JJL with a report from BBT)