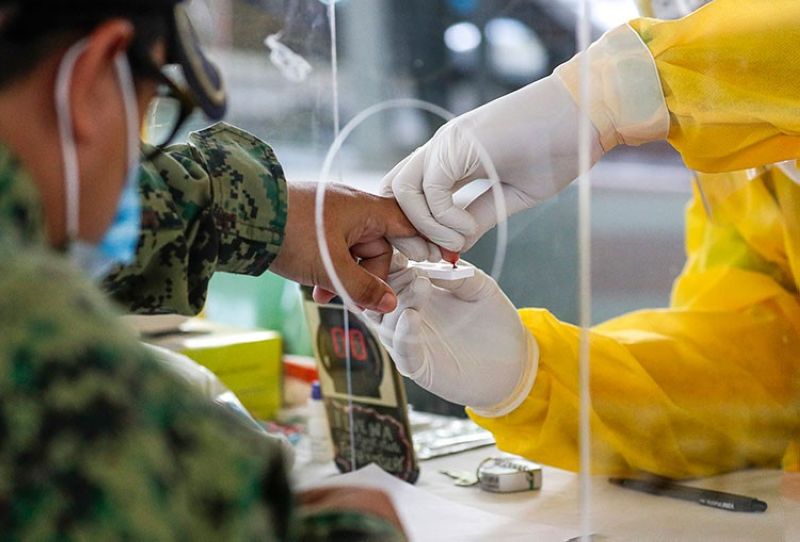 MANILA. In this file photo, a health worker collects a blood sample from a police officer as they conduct mass testing for the coronavirus at a school in Manila, Philippines. (AP)

Vivencio Dizon, NTF deputy chief implementer for testing, said Monday, July 13, 2020, he was confident that the number of diagnostic tests conducted nationwide would surpass the targeted one million tests by the end of July.

As of July 11, the Department of Health (DOH) reported that a total of 908,779 individual tests for Sars-CoV-2 have been conducted. Sars-CoV-2 is the coronavirus that causes Covid-19.

He said these laboratories conduct an average of 25,000 tests daily. By the end of July, the daily average should hit the target of 30,000.

The skills training is needed to provide contact tracers with cohesive interviewing skills and help those found positive for the virus to recall the people who may have had contact with them, Magalong said.

The contact tracing e-system, on the other hand, has three components - Covid-19 data collection tool, GIS platform and analytical tool for link analysis.

Aside from testing and tracing, the task force is also expanding capacity to isolate and treat Covid-19 patients.

These include the 129 regional evacuation centers that are being converted into quarantine facilities, 11 quarantine centers in Central Visayas, 16 in Eastern Visayas, 20 in Northern Mindanao and three in Soccsksargen.

In the next three weeks, Villar said they hope to build 50 more quarantine centers.

He said talks are ongoing with several local government units (LGUs) that are willing to provide the site for the quarantine facilities.

As of July 8, Vega said 43.8 percent of the 4,480 isolation beds nationwide are occupied while 43.7 percent of the 573 ICU beds are in use. (With a report from Jove Moya/SunStar Philippines)