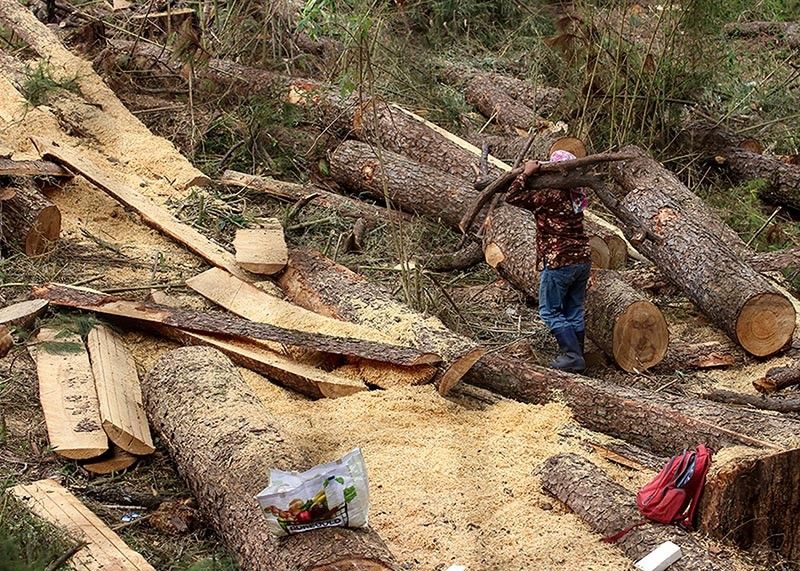 BAGUIO. A worker carries a felled pine log along Legarda road in this photo taken 2019. On Monday, Baguio City Councilors want to impose a five-year tree cutting moratorium for both residential, business and public areas in an ordinance proposed this week. (Jean Nicole Cortes)

THE Baguio City Council is moving to stop tree cutting.

Councilors Levy Lloyd Orcales, Joel Alangsab and Arthur Allad-iw moved to impose a five-year tree cutting moratorium for both residential, business and public areas in an ordinance proposed this week.

Orcales said it is saddening to note that there is scheduled tree cutting in the city annually, and lately, every month, pushing the need for the stop of the activities immediately.

"We are giving way for tree cutting for profit... It is imperative to arrest the degradation and destruction of the city's remaining forest resources consistent with the paramount duty of the State to protect the right of the people to a balance and healthful ecology, in accord with the rhythm and harmony of nature," the youth leader said, adding the Department of Environment and Natural Resources (DENR) Regional Director Ralph Pablo said the city has long reached its maximum carrying capacity and a moratorium would give the city a respite from too much development.

Last week, a slow gasp was heard at the halls of the City Council as Pablo said additional 75 more trees will be cut as part of the last phase of the Moldex Reality project in Marcos Highway and posting of the tree cutting permit to the public.

Orcales said the moratorium would also allow the City Government of Baguio, through the City Planning and Development Office (CPDO), to review and re-assess the Comprehensive Land Use Development Plan (Culp), and highlight the urban forests and lands dominated by Benguet Pine Trees as a valued resource and lay down concrete plans and strategies for preserving those resources from destruction or degradation by inappropriate development.

"It cannot be said that Baguio's identity is anchored on the existence of robust Pine trees, hence dubbed as the 'City of Pines.' But the Benguet Pine tree (Pinus kesiya), endemic to the Cordillera Region, is being lost to development and urban expansion," Orcales said.

Pablo briefed the City Council on the permits given to the Philippine Military Academy for its parking building, which entailed the cutting of 53 trees, as he did a rundown of cutting permits given to proponent developers in the city aside from Vista Land Incorporated.

Pablo said additional requirements were imposed on Moldex before the cutting of 75 trees, which include a courtesy call to the City Government, as well as planting of new trees and posting of the tree cutting permit to the public.

Pablo also informed the City Council that even without the blessing of President Rodrigo Duterte, the city can issue a resolution imposing a tree cutting moratorium.

"These are very much welcome to the DENR," Pablo said.

In 2019, Moldex Reality managed to cut 49 trees, with a timeline dating back to 2018 when the company requested for tree cutting permit within its property in Bakakeng Central.

The request came with approved building permits from the City Buildings and Architecture Office (CBAO) and site development plan, Environment Compliance Certificate (ECC), validated Transfer Certificate of Title (TCT), a barangay resolution and minutes of the public consultation with a certification from Bakakeng Central barangay the trees being applied for tree cutting permit is within the property of the realty firm.

The city issued a clearance to Moldex Reality to cut trees in their property in Bakakeng Central.

DENR-Cordillera Administrative Region issued a tree cutting permit in favor of Moldex Realty for 43 Benguet Pine and 6 Alnus trees with a total volume of 22.95 cubic meters with Moldex required to the firm to turnover 2,450 seedlings as replacement.

The entire Moldex project spans 3.1 hectares and consists of seven buildings including a three story underground parking building which will accommodate 300 cars, fulfilling the mandate to provide space for parking by the building code of the city.

Previously, the City Council called on representatives from DENR and Vista Land Incorporated to shed light on the recent cutting of trees in their private area.

Vice Mayor Faustino Olowan instructed the officers of the real estate company to postpone the cutting of the remaining 24 trees within the construction site at Purok 3, Outlook Drive Barangay, after cutting 30 tree during the quarantine which angered the community.

The suspension order would give the City Council more time to deliberate on the matter in aid of legislation.

Pablo said the company may proceed cutting the remaining trees as it had already secured a Special Private Land Timber Permit (SPLTP) and had complied with the procedures set forth by the department.

According to Pablo, besides the legality of the tree-cutting activity, the remaining trees need to be cut urgently as these are in critical condition and may pose danger to lives and properties because they are hanging on steep slopes.

Pablo, however, yielded to the City Council's decision to suspend the tree-cutting activity.

When asked about the possibility of sparing the 24 uncut trees, Allan Santos, technical service officer of Vista Residences, explained it is not possible to reconfigure the architectural plan of the condominium to be built in the area. However, trees will be planted within the site after the construction as part of the landscape, Santos added.

According to reports, the real estate company started cutting the 53 trees on June 20, 2020. Thirty had already been cut. Vista Land's permit to cut the remaining trees will expire on July 15, 2020.

The ordinance explained through the moratorium on tree-cutting, it would allow the city to breathe, recover and regain its forest covers for the benefit of the present and future generations. The moratorium on tree-cutting is needed so that the pending Urban Forest Management Master Plan of the City Government of Baguio will not be rendered futile.

The Master Plan is currently being crafted by the CEPMO, in partnership with other environmental agencies and civic groups, geared towards creating a 10 year road map for a strategic approach to preservation, management and expansion of Baguio's urban forest in order to create a more walkable connections and multi-modal landscape that can offer many of the environmental, economic, social and health benefits to the people of Baguio City.

If the moratorium is approved, a fine of P5,000 and confiscation of the lumber, any tree-cutting tools and equipment and an imprisonment for a period not exceeding one year will be in place.