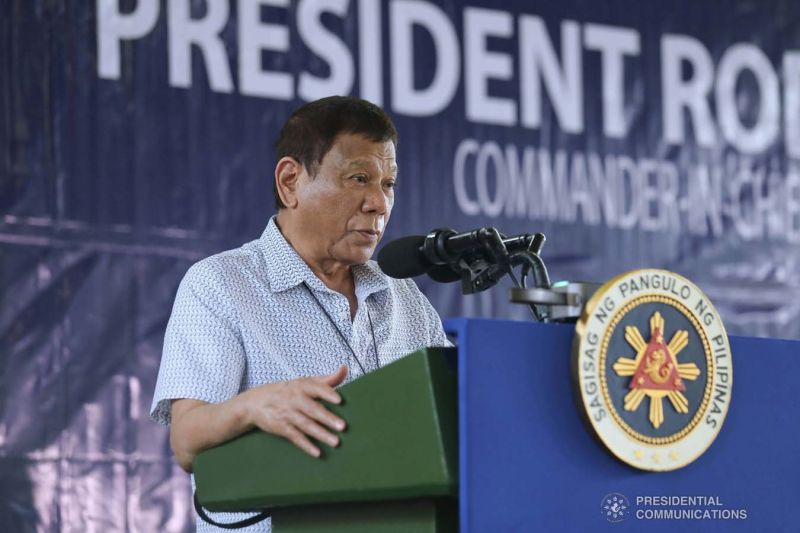 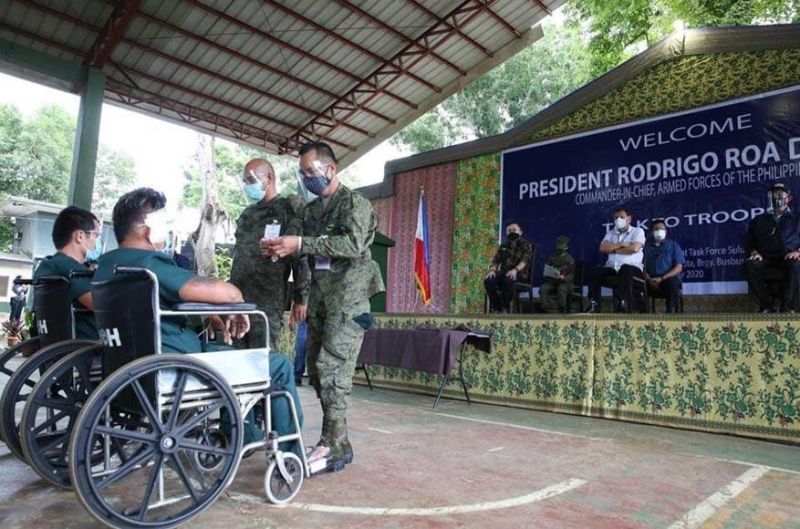 SULU. Staff Sergeant Ramonito Q. Diapolet and Corporal Maynard D. Cabote, who were wounded in an encounter with the Abu Sayyaf on July 6, 2020, are conferred the Order of Lapu-Lapu, Rank of Kampilan during the visit of President Rodrigo Duterte in Jolo on July 13, 2020. (Photo by Senator Bong Go)

RECALLING his campaign promise to stamp out corruption, President Rodrigo Duterte said on Monday, July 13, 2020, that he has "dismantled the oligarchy that controlled the economy".

Duterte visited the troops in Jolo, Sulu on Monday to assure them again that the truth behind the death of four soldiers at a police checkpoint will come out and justice will be served.

“As your Commander-in-Chief, I grieve for our fallen men and convey my deepest condolence to you for the death of your comrades,” Duterte said in a speech at Camp General Teodulfo Bautista in Jolo.

Setting aside his prepared speech, Duterte addressed Sulu Governor Sakur Tan, saying he was aware that the governor was hurting because a Tausug was killed.

The soldiers who were shot dead at a police checkpoint in Jolo on June 29 were Major Marvin Indammog, Captain Irwin Managuelod, Sergeant Jaime Velasco and Corporal Abdal Asula.

Duterte recalled his campaign promise to stamp out corruption, not just within the Bureau of Customs or the Bureau of Internal Revenue, but among the elite whom he described as “mga mayaman na ginagatasan ang gobyerno pati ang tao”.

The President made the statement three days after the House of Representatives committee on legislative franchises rejected the application of the Lopez-led ABS-CBN Corporation for a new franchise to operate broadcasting stations.

Presidential Spokesperson Harry Roque has repeatedly insisted that Duterte has been neutral on the issue since ABS-CBN CEO Carlo Katigbak apologized for the network's failure to air some of the President's political advertisements during the 2016 elections.

It was the second time that Duterte addressed the Armed Forces of the Philippines on the killing of four Philippine Army intelligence personnel by policemen at a checkpoint in Jolo two weeks ago on June 29.

The President flew to Zamboanga City on July 3 to appease the troops and prevent hostility between the military and police.

He again expressed Monday his hope that the “isolated incident” would not spark animosity between the two forces.

He assured that the National Bureau of Investigation (NBI) investigation into the incident will ferret out the truth.

“As Commander-in-Chief and as President of the Republic of the Philippines, I assure you that I will see to it that the truth will come out be it in favor of the police or the military. Ang hinihingi ko lang ang totoong nangyari,” he said.

“So you can rest assured that justice will be done to the family at sa mga tao dito sa — ang mga tropa dito sa Jolo,” he added.

The nine policemen involved in the shooting have been relieved from their posts and transferred to Camp Crame to ensure cooperation in the investigation being conducted by the NBI.

In his speech, Duterte also expressed his gratitude to the troops fighting Muslim extremists in Sulu amid the coronavirus disease 2019 (Covid-19) pandemic.

“To our brave soldiers who are with us today, I personally came here to thank you on behalf of the Filipino people for your undying service, especially during these trying times,” Duterte said.

“As we fight the Covid-19 pandemic, lawless elements still take advantage of and ravage across our land, disrupting public order. Recently, it has been a difficult time for our men and women in uniform due to the escalating tensions between the military and the terrorist groups,” he added.

During his visit, Duterte witnessed the conferment of the Order of Lapu-Lapu, Rank of Kampilan on two soldiers who were wounded during a July 6 encounter with the members of the Abu Sayyaf Group in Barangay Bakung, Patikul, Sulu.