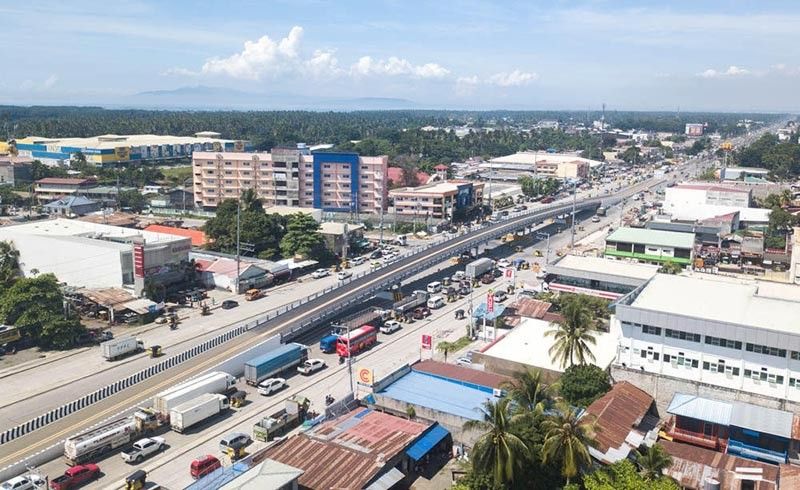 DAVAO. The P76-million flyover aims to decongest the main thoroughfares of Panabo City in Davao del Norte, particularly at the busy Tadeco Road junction along Daang Maharlika. (Photo from DPWH)

THE P76-million Panabo City Flyover will be accessible to the public starting July 16.

Department of Public Works and Highways (DPWH)-Davao information officer Dean Ortiz said the project was completed during the first quarter of 2020 but has to do finishing touches, which was almost stalled by the coronavirus disease 2019 (Covid-19) pandemic.

The flyover aims to decongest the main thoroughfares of Panabo City in Davao del Norte, particularly at the busy Tadeco Road junction along Daang Maharlika.

The bridge spans at around 800 meters, which already includes the 600-meter bridge approaches.

Ortiz, in a project brief sent to SunStar Davao, said it was constructed using "prefabricated modular steel technology" from the French construction materials supplier Matiere S.A.S provided by the French government through an assistance program.

Meanwhile, the City of Panabo welcomed the development, saying it will minimize the occurrence of vehicular accidents and is seen to help boost the economy of the city.

The construction of the bridge was undertaken by the DPWH Unified Project Management Office-Bridges Management Cluster while the road widening and drainage components were implemented by DPWH-Davao del Norte District Engineering Office.