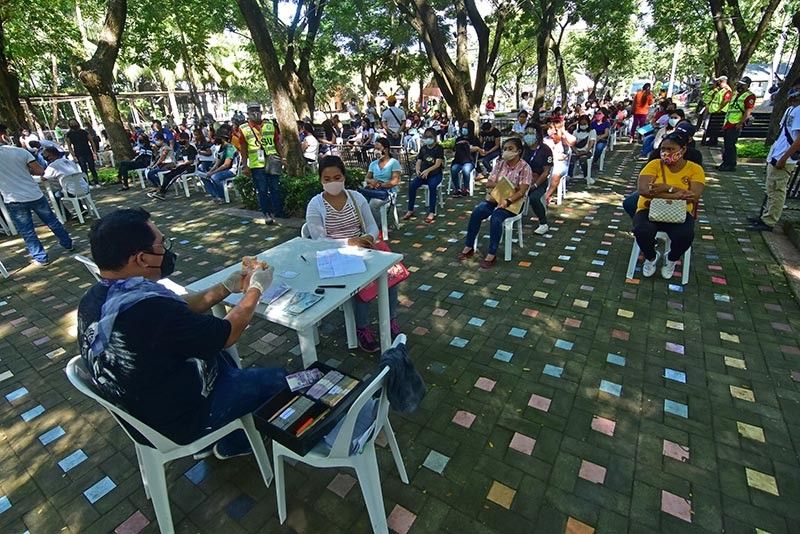 DAVAO. A total of 831 beneficiaries received their salary of P3,960 from the Work for Davao program on Tuesday, July 14, 2020. The City has released around P3.2 million for Work for Davao beneficiaries. The program is part of the City Government's efforts to provide assistance to those who have lost their jobs during the Covid-19 pandemic. (Macky Lim)

THE City Government of Davao has released over P3.29 million in funds for the first payout of the 831 beneficiaries of the Work for Davao program.

The City Government launched the "Work for Davao" program in early June this year. It is an emergency employment cash for work for individuals who were terminated, laid off, or with foreclosed business or offices due to the restrictions imposed to mitigate the coronavirus disease (Covid-19) pandemic.

The program, which will have 23 batches, has a total of 42,915 beneficiaries who will be screened thoroughly to qualify for the Work for Davao program.

Presidential Commission for the Urban Poor (PCUP) supervising commissioner for Mindanao and Work For Davao in-charge Norman Baloro said Work For Davao had an "overwhelming" number of applicants, which reached an estimated 49,000.

"To come up with 42,915 na deserving, ato gyud to unahon tong based sa atong guidelines na retrenched, or until now wala pa nakabalik sa ilang work because of Covid-19 (To come up with 42,915 deserving applicants, we prioritized, according to our guidelines, those retrenched or those who have not resumed work until now due to Covid-19)," Baloro said.

A total of 1,612 applicants were qualified for the second batch of the program; 1,773 for the third batch; and 3,022 for the fourth batch. Another 1,874 qualified applicants will be announced on July 15 on the Work for Davao Facebook page. They will start working from July 20 to July 31, 2020.

Incoming batches, he said, will be notified through text and on their official Facebook page, a week before they will start.

Workers, who failed to claim their payout, can still claim it within three to five working days at the City Treasurer's Office inside the Sangguniang Panlungsod building.

He said the program, which involves different community work, also brought different psychosocial interventions for the workers. He said it not only helped them from their financial woes but also helped them cope with their anxiety amid the pandemic.

He added workers were able to build camaraderie with fellow workers.

Meanwhile, workers who will not qualify for the Work For Davao can avail themselves of the Eskwela Davao, an educational assistance program for the children of workers who are currently employed but salaries have been reduced by a skeleton workforce arrangement in their offices due to the Covid-19 pandemic.

Baloro said affected individuals can only avail themselves of one social program to give chance to others.

Mayor Sara Duterte-Carpio previously said that around P50 million were allocated for Eskwela Davao, while P159,944,000 were allocated for Work For Davao, both sourced from the Department of Budget and Management grant requested by the city last year.