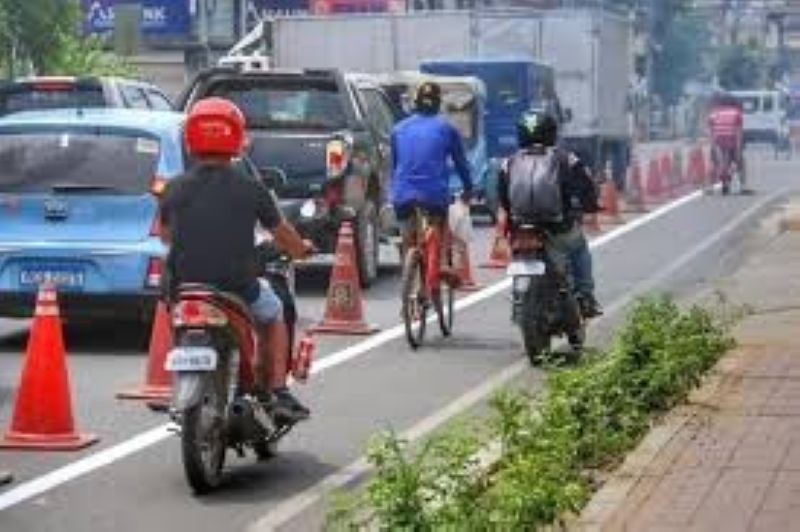 WRONG LANE. People on motorcycles in Mandaue City are seen using the bike lanes which are supposed to be exclusive to cyclists. The fine for this violation is P500. (SunStar file)

AFTER a month of the implementation of bike lanes in Mandaue city, up to 50 motorists have violated the rules on the proper use of the bike lanes.

According to Arnold Malig-on, operations chief of the Traffic Enforcement Agency of Mandaue (Team), most of these violators were motorists who illegally parked along the bike lanes.

He said the owners of the illegally parked vehicles were clients of establishments that did not have their own designated parking areas.

Apart from this, there were fewer than 20 drivers of motorcycles caught using the bike lanes.

Malig-on explained that bike lanes are exclusively for cyclists.

The fine for this violation of motorcycle drivers is P500.

The Team members have also clamped up to 15 illegally parked vehicles on bike lanes.

These clamped vehicles were unattended.

The driver must go to the Team office to pay the fine of P1,500.

Malig-on said most of these violations occurred in the first two weeks of the implementation of the bike lanes.

In the weeks that followed, Malig-on found that motorists had understood the proper use of bike lanes.

Motorcycle drivers no longer use the bike lanes.

Malig-on said they have not yet reported any accident on the bike lanes where bikers are involved.

However, there are still accidents at the intersection involving bikers, commonly, when bikers beat the red light.

Malig-on urged cyclists to comply with the traffic laws.

Meanwhile, the Cebu City government has conducted ocular inspections in two major thoroughfares in preparation for its own plan to put up bike lanes.

Alma Barandog-Casimero, Cebu City Transportation Office head, said the ocular inspections were conducted along Osmeña Blvd. and N. Bacalso Ave., which have been identified as priority areas for the bike lanes.

Casimero said they are also preparing the signs and other materials such as the paint for the bike lanes. (KFD, PAC / JKV)