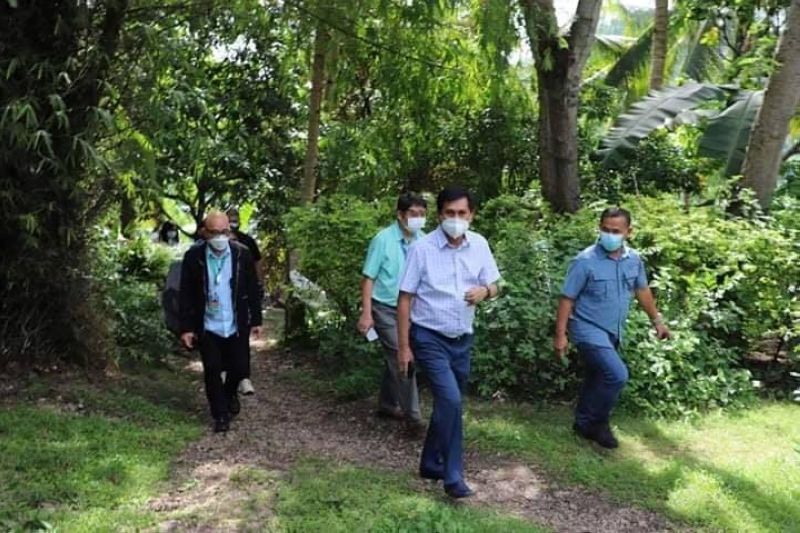 SITE INSPECTION. Environment Secretary and Cebu Covid-19 overseer Roy Cimatu (second from right) and local environment officials visit Barangay Buhisan to inspect possible sites for the construction of a cemetery to address the shortage of burial areas in Cebu City. Cimatu and Cebu City officials eventually agreed to put up the cemetery in a two-hectare property in Barangay Sapangdaku. (Photo by IATF Visayas)

A TWO-hectare timberland area in Sitio Patayng Yuta and Sitio Baksan, Barangay Sapangdaku, Cebu City will be the new site of the Cebu City Botanical Memorial Garden, a public cemetery that the Cebu City Government intends to build up in the mountains.

This after Department of Environment and Natural Resources (DENR) Secretary Roy Cimatu issued an order to transfer the planned cemetery to Barangay Sapangdaku following a DENR 7 Protected Areas Management Board (PAMB) resolution denying the application of the Cebu City government to construct the cemetery in Barangay Guba, a protected area under the Central Cebu Protected Landscape (CCPL).

Also, the PAMB denied the City's application for clearance pursuant to Republic Act 11038 or the Expanded National Integrated Protected Areas System (E-Nipas) Act of 2018 and Presidential Decree 856, or the Sanitation Code of the Philippines.

Since Barangay Guba is within a watershed area, constructing a cemetery there could affect Cebu's important water supply.

To fast-track the processing of documentary requirements needed for the construction, Cimatu committed to assist the City Government by organizing a technical working group composed of the Environmental Management Bureau (EMB), the Mines and Geosciences Bureau (MGB), and the Department of Health (DOH).

Cimatu told officials that in strictly complying with the documentary requirements, no shortcuts to the process must be made.

Among the requirements the City Government needs to comply with are the following: a resolution from the City Council interposing no objections to the project, an application letter for an environmental compliance certificate (ECC), a development plan on the cemetery, and tree cutting permits.

Cebu City was supposed to build a five-hectare cemetery in Barangay Guba to address the increasing number of fatalities due to Covid-19. Site development started with the cutting down of 389 mahogany trees.

The DENR 7 ordered a stop to the cutting of trees in the area last week and warned the City against developing the site without a Protected Area Management Plan (PAMP) and without applying for an ECC. The City is also facing violations for cutting the trees without a permit.

Cimatu tasked the DENR to find an alternative area where the cemetery could be constructed.

"He (Cimatu) recognized the urgency of the construction of the cemetery considering that the number of Covid-19 deaths in Cebu City is increasing," said Dr. Eddie Llamedo, DENR 7 Planning Division chief and the agency's spokesperson.

Since Monday, Cimatu and DENR 7 officials surveyed some potential timberland and government-owned sites in Cebu City.

"We have to immediately identify burial sites that are outside protected areas, and will pose no harm to the immediate community," Cimatu said on Monday, July 13.

Cimatu, who also serves as Covid-19 overseer in Cebu, said he supports the city's initiative to construct a new cemetery due to the number of dead bodies in some of the city's funeral parlors waiting to be cremated or buried.

He said some crematoriums are facing backlogs with dead bodies waiting for three to four days before they can be cremated.

Of this number, 193 fatalities or 53.76 percent of the total deaths, were recorded in the last two weeks.

"For as long as it can comply with all the environmental requirements because putting up a cemetery is an undertaking that requires a more delicate environmental compliance under environmental laws, so it is all right with me," Labella said. (MVG, JKV / with reports from IATF Visayas)