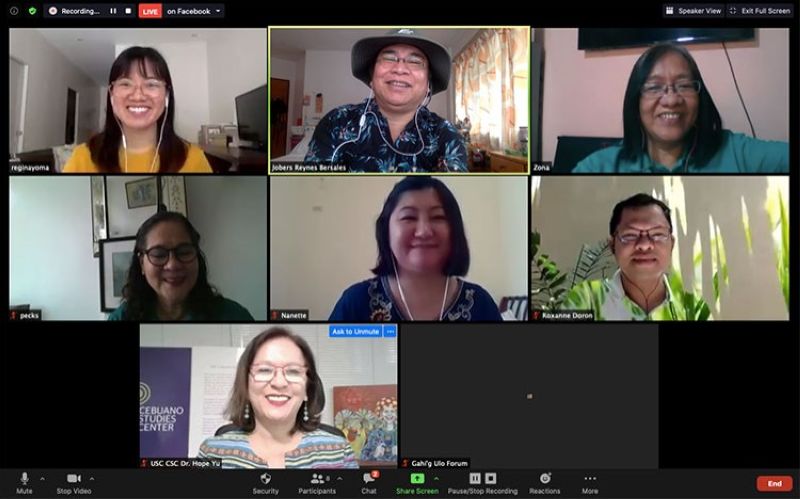 SOCIAL scientists from the different research units of the University of San Carlos (USC) presented Saturday morning, July 18, in an online forum their views regarding recent allegations of Cebuano misbehavior in the face of stringent community quarantine protocols.

Fr. Narciso Cellan, SVD, who assumed only last month as USC president, welcomed the webinar participants and set the tone by looking at how different cultures react to calamities and behave accordingly.

He recalled a 1987 study conducted by Ateneo de Manila University that traced the strengths and weaknesses of the Filipino and asked whether these were still valid for Cebu 40 years later.

For her part, Dr. Amper, an anthropology professor and senior researcher at the USC Center for Social Research and Education (CSRE), pointed to the sheer poverty and abject living conditions of nearly half the population in the city as the main reason why it is difficult to impose the nationally mandated health protocols.

Thus, when they are locked in for 15 days with free food delivered only for two days, people in these settlements have no recourse but look for ways of earning money.

Using statistical data from the Department of Social Welfare and Development, Amper presented the density of population per square kilometer in Cebu City's top 10 urban barangays. Many households in these barangays, according to her, do not even have toilet and sanitation facilities as well as potable water, much less vital space to practice social distancing.

Dr. Nolasco, CSRE director, on the other hand, looked at how mass hysteria may be one reason why many do not seem to follow protocols simply because they have no definite understanding of the pandemic. At the same time, she presented her study on HIV prevalence among sex workers in which there is sometimes a disconnect between a person's knowledge about the risks of getting the virus and their actual behavior. She also pointed to the politics of care that has an impact on the delivery of services that needs to be studied closely.

Expounding further on the poverty situation in urban settlements discussed by Amper, Roxanne Omega-Doron, executive-director of Diyandi Heritage Center Inc., looked at the possibility of misbehaving as a form of protest. He also pointed to the leadership networks among urban poor residents which affect who they follow and obey.

Dr. Nanette Lee-Mayol, director of the USC Office of Population Studies (OPS), presented findings in two on-going longitudinal studies conducted by her office, one starting in 1983 and continuing until 2030 on the same respondents. In these two studies, she culled data of rule-breaking and found no significant difference respondents from Luzon down to Mindanao and between those living in Metro Cebu and Cebu City. Using a set of activities deemed rule-breaking, like texting while driving or involvement in fights after drinking, she saw only a very slight and insignificant difference between the data from Cebu City as against Metro Cebu.

The forum's last speaker, Dr. Hope Sabanpan-Yu, director of the USC Cebuano Studies Center (CSC), used a fairy tale from the Brothers Grimm to present a philosophical dimension to misbehavior and how it can be a form of protest but on dangerous grounds in the midst of the pandemic.

The webinar was the first of a series hosted by the USC Museum. Some 308 participants registered with over 350 viewers on the official Facebook page of USC Museum. The next webinar, on the "Archaeology of the Visayas" by archaeologist Dr. John Peterson, will be hosted in the first week of August. (PR)