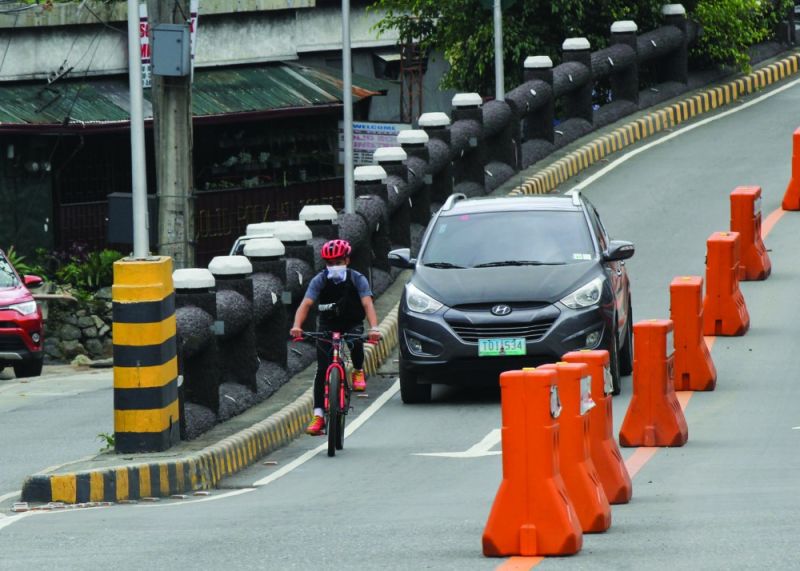 BAGUIO. While Baguio City has yet to designate bike lanes in major thoroughfares, the City Council is looking to pass a bike safety ordinance in order to protect their life and limb while on the road. (Jean Nicole Cortes)

BAGUIO City Councilor Mylen Yaranon is pushing for a law requiring all cyclists and scooter riders in the city to use helmet and safety reflectors.

Approved on first reading, the use of reflective vests with the installation of safety reflectors on front and rear lights on bikes and electric scooters was included in the measure while seeking penalties to violators.

Yaranon said the use of bicycles has gained popularity due the quarantine on mass transportation with the government moving to make the city a bike friendly environment.

"As part of making the city a bike friendly environment, it is vital that safety requirements must be imposed on bikers and electric scooter enthusiasts in order to protect their life and limb while on the road," Yaranon said.

Yaranon's proposed ordinance, known as the "Bike Safety Ordinance," if passed into law, will mandate all bike and electric scooter users to use protective gear composed of reflective vests and helmets with the installation of safety reflectors on front and rear lights on bikes and electric scooters.

Under the proposed ordinance, violators will be given citation tickets and pay P150 to P500 with community service of 240 hours under the supervision of the barangay where the offender resides.

Supervision and implementation of the law will be delegated the Traffic Management Unit of the Baguio City Police Office.

Previously, Yaranon also proposed an ordinance, which was passed on first reading, asking for a "Bicycle Day" every Sunday of the week.

Facilities for bikes include, bike lanes at all roads within the city, physical dividers in places that such dividers is not physically feasible, the dividers be identified through reflectorized painted lines, pedestrian and bicycle crossing improvement, traffic signages pertaining to bicycles and bicycle parking facilities.