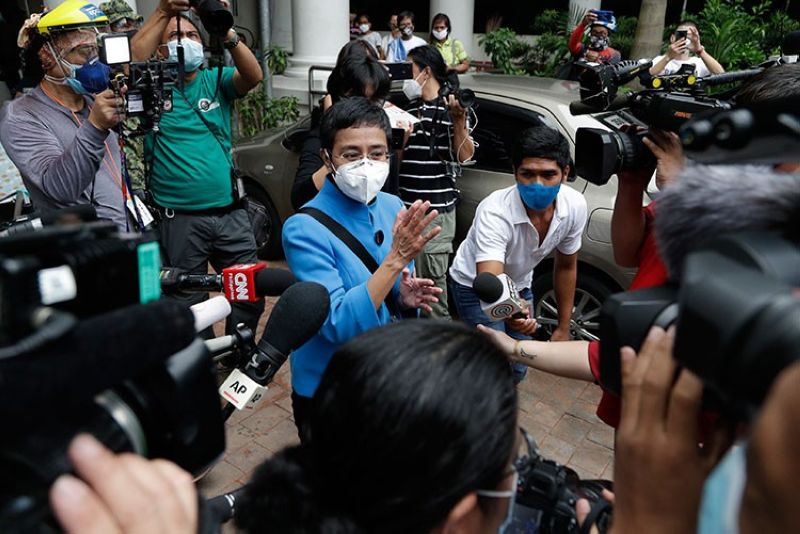 MANILA. Rappler CEO and Executive Editor Maria Ressa gestures as she talks to reporters at the Pasig Regional Trial Court where she attended an arraignment related to tax evasion charges filed against her in Pasig, Manila, Philippines on Wednesday, July 22, 2020. (AP)

AWARD-WINNING journalist Maria Ressa, who was last month convicted of libel in what was widely criticized as an attack on press freedom, on Wednesday pleaded not guilty to tax evasion, one of several other cases she and her online news site are facing.

Ressa, who heads Rappler Inc., told reporters outside a Manila court that "we have to hold the line every step of the way," referring to her defense.

She said she pleaded not guilty during her arraignment on a charge of tax code violation related to Rappler's VAT return for the second quarter of 2015.

In April 2019, Ressa pleaded not guilty to four other tax violation charges before the Court of Tax Appeals, which consisted of one count of tax evasion and three counts of failure to supply correct tax information.

Ressa, who worked for CNN and was one of Time magazine's Persons of the Year in 2018, has accused the government of President Rodrigo Duterte of abusing its power and using the law to muzzle dissent.

Last month, a Manila court found Ressa and a former Rappler reporter guilty of libeling a wealthy businessman. Ressa was sentenced to up to six years but her lawyer said the prison terms and other penalties imposed could not be enforced unless all appeals were rejected.

Duterte and other Philippine officials have said the criminal complaints against Ressa and Rappler were not a press freedom issue but part of judicial procedures arising from their alleged violations of the law. (AP)