DTI allows up to 75% dine-in capacity 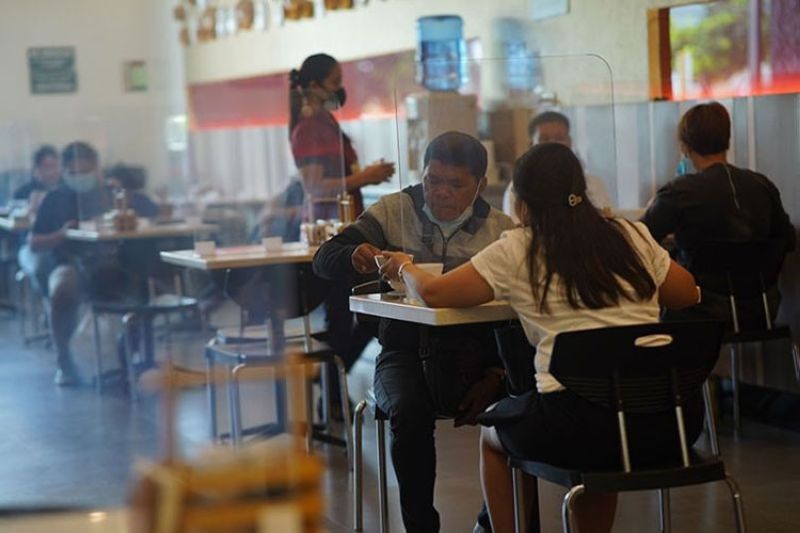 THE Department of Trade and Industry (DTI) has allowed restaurants and fast food chains to cater to dine-in customers at 75 percent of its seating capacity in areas under modified general community quarantine (MGCQ) but restaurant owners are still struggling to fill their establishments even at 50 percent capacity.

In Memorandum Circular 20-39, the trade department expanded the operating capacity of the restaurants and fast food chains at a maximum of 75 percent of its dine-in service in MGCQ areas subject to strict compliance with social distancing protocols starting July 21.

For areas under general community quarantine (GCQ), a maximum of 50 percent of the restaurant's capacity for dine-in is now allowed.

The trade department also permitted the food establishments to serve all kinds of food and beverages including liquor for a maximum of two individual servings per customer.

It also allowed buffet services provided that food servers are provided and all food trays have covers. Families living in the same household may also share one table as long as they show proof that they are staying in one address and their table be distanced one meter away from the table of other customers.

The circular covers all types of food establishments including canteens, food courts, food parks and other eateries providing dine-in services, regardless of their sizes.

The City Government of Davao has not yet issued new guidelines on the seating capacities for restaurants. Restaurants and fast food businesses in Davao City continued to adhere to the 50 percent capacity based on the city's July 1 to 15 MGCQ guidelines.

However, the group of restaurant owners in Davao City are not keen on increasing their seating capacity due to the limited number of people going out.

"At this point, it is irrelevant to talk about seating capacity because the general public appears to be wary of going out to dine.

"We have been allowed to cater customers at 50 percent seating capacity but I still have to hear of a restaurant that has consistently filled-up the 50 percent," he added. However, Lizada appealed to the City Government to study the possibility of allowing people to go out on Sundays.

"We, in the restaurant sector, think it will make a huge difference. Iyon yong isang malakas na araw pre-Covid.

Baka pwede alternate first and third Sundays, odd, second and fourth Sundays even (Sundays are the peak days for restaurants before the pandemic.

Maybe, they could allow those with odd numbers in their food and medicine passes to go out on the first and third Sundays and those with even numbers on second and fourth Sundays of the month). If the number of infected people increases, then we suspend it," he said.

Other restaurant owners welcomed the idea of catering more people as long as health and safety protocols are followed.

"It would be better if allowed seating capacity is increased to 75 percent business-wise but syempre, we also have to follow the health guidelines and we should strengthen it especially that we are handling people and food," Asian Cow and Fat Cow owner chef Patrick Co said.

He said they are willing to adhere to whatever the decisions of the DTI and the City Government. Lizada said he trusts Davao City mayor Sara Duterte-Carpio on her decisions.