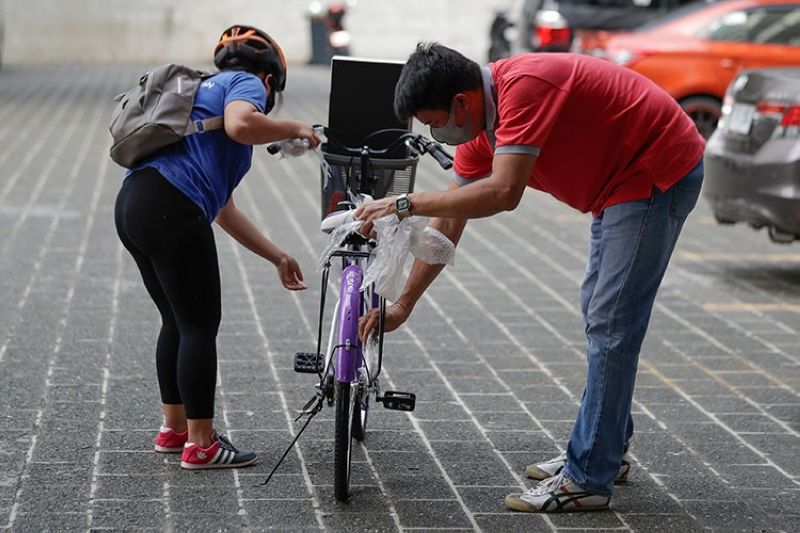 MANILA. A recipient (left) of a bicycle from the Benjamin Canlas Courage to be Kind Foundation prepares to ride outside a building at the financial district of Manila, Philippines, Saturday, July 11, 2020. (AP)

MANILA -- A year after he passed away at age 17, Benjamin Canlas is still making the world a better place - one bike at a time.

The teenager is the inspiration for an unusual giveaway of mountain bikes, presented to Filipinos who are struggling to hold on to jobs in a country hard hit by the coronavirus. A foundation established by Benjamin's parents is making it happen.

"There is so much need out there," said Dr. Glennda Canlas, co-founder with her husband Dr. George Canlas of the private Benjamin Canlas Courage to be Kind Foundation. "But people are willing to help, you just have to put them together."

In the wake of business closures and job losses in the Philippines, thousands of Filipinos have found themselves struggling to make ends meet. With a severely restricted public transportation system in metropolitan Manila, many were left with no choice but to take on odd jobs, completing them by foot, walking hours in the sun and rain.

The boy's parents recalled how once, when Benjamin saw a food peddler riding a beat-up bicycle with its pedals missing, he used his own savings to replace them. And they saw a way to connect their private donors with the needy in a way that echoed their son's good deed.

The idea was to give away bikes to deserving individuals nominated by their peers or loved ones. Unsure of the demand, the foundation at first announced on social media that it would give away just seven bicycles. But there were more than 50 entries.

The nominations were vetted for authenticity and on July 11, 27 individuals got bicycles that would help make their lives a little less difficult.

Among the recipients was 25-year-old Ronaldo del Rosario Jr. who lost his job at a fast food chain due to the lockdown. He ended up borrowing a bicycle to sell rice cakes in the morning and smoked fish in the afternoon, to support his wife and almost two-month old baby. He traveled tens of kilometers each day. Often, precious time and income would be lost when his borrowed bike needed repairs.

"I nominated him because he's so hard working that his (bicycle) wheels always end up breaking down," said Mharygrace Ortega, del Rosario's partner.

At first, del Rosario couldn't believe that he was getting a new bike.

"A bike isn't just a simple thing," he said. "A bike, for me, is what supports my life. A bike is my partner in my work every day. Especially now that we lost regular schedules at my previous job."

Another new bike owner is homemaker-turned-online seller Liezel Camilla. Mother of a two-year-old child, the 24-year-old Camilla started selling and delivering food on her own when her husband's work was put on hold.

"I am so happy that I won't have to walk so far anymore," expressed a teary-eyed Camilla.

Even as the contest ended, nominations continued to pour in. The foundation acknowledged that while there are people still in need, much work has to be done.

It is working on launching more sustainable projects that will help more while also inspiring others to pay it forward.