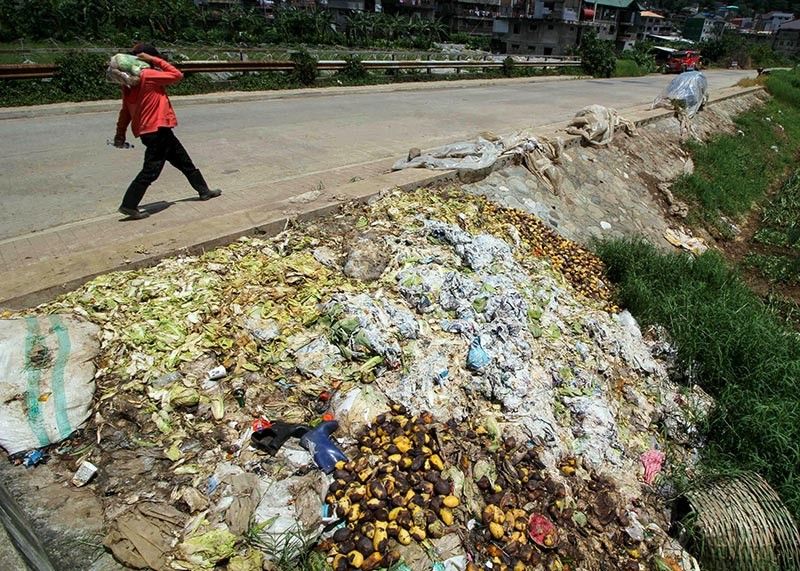 BAGUIO. In this photo taken July 1, 2020, a pile of biodegradable waste is dumped near the farm outside BAPTC. Oversupply of vegetables is still a problem faced by the vegetable industry in the Cordillera Administrative Region. (Jean Nicole Cortes)

CLUSTERING the entry of vegetable at La Trinidad Vegetable Trading Post (LVTP) and the Benguet Agri-Pinoy Trading Center (BAPTC) was proposed in a bid to lessen impact of oversupply and congestion.

During Monday's regular session, Philippine Councilor's League-Benguet chapter president and Board Member Nestor Fongwan Jr. introduced the proposed measure approved on first reading that aims to prevent oversupply of vegetables that causes losses for farmers, who either opt to throw or sell their produce at rock bottom prices.

Fongwan said the proposed measure aims to improve traffic management at both trading centers in La Trinidad and stabilize the supply and price of vegetables.

The Provincial Inter-Agency Task Force (PIATF) earlier implemented clustering of municipalities to deliver produce as a health and safety protocol amid the threat of Covid-19.

Governor Melchor Diclas on April 6 issued a memorandum circular to all mayors relative to the clustering of towns in delivering vegetable produce at the LVTP and BAPTC.

Fongwan said the clustering implemented by the PIATF received numerous positive reactions from the people of the province not only because of its main purpose of implementing social distancing, but also its effect on the stability of the supply of vegetables and also stability of prices.

Vegetables being brought into the large-scale vegetable trading centers were clustered according to their municipality of origin.

Towns in cluster 1 will deliver their produce every Monday, Wednesday, and Friday, while the second cluster delivers every Tuesday, Thursday, and Saturday.

A committee was also formed to take into consideration all matters concerning the ordinance and submit their recommendation to the governor for his consideration.