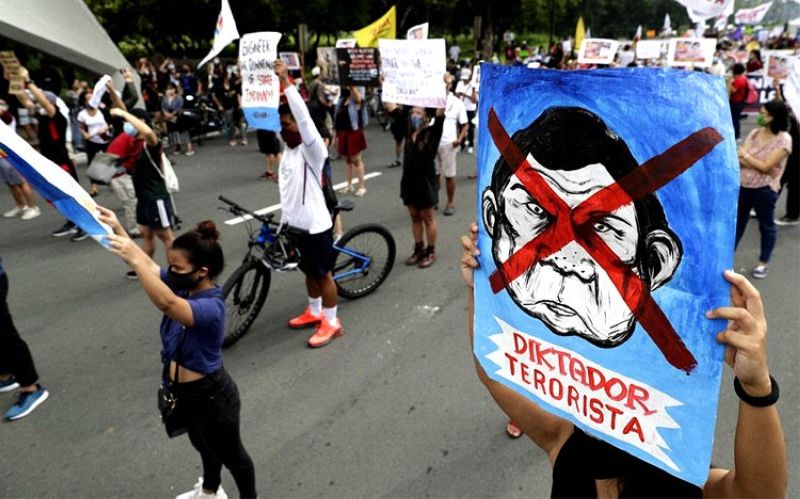 MANILA. Protesters raise slogans during a rally against the anti-terror law at the University of the Philippines in Manila, Philippines on Saturday, July 4, 2020. (AP)

In a statement, Karapatan Secretary General Cristina Palabay said that protest bans ahead of Sona are acts of cowardice from a fascist regime fearing mass resistance.

"It's not surprising that this inutile regime is using protests as convenient scapegoats for the ballooning number of Covid-19 cases to justify the banning of protests for Sona when in fact, it has been the government's lack of planning and continuing neglect of public health, basic social services, and people's rights and welfare that has caused the pandemic to spread," Palabay said.

"The Duterte regime is shameless in using quarantine measures to crack down on dissent but we will not be deterred: we will join thousands in the streets on Monday, we will observe proper health protocols, and we will ring the people's demands louder than ever," he added.

She said resolutions from the Inter-Agency Task Force (IATF) on Emerging Infectious Diseases are not constitutional laws.

"We would like to remind the DILG (Department of the Interior and Local Government) and the Philippine National Police (PNP) that the IATF resolutions and guidelines are not laws; they are also not higher than the Constitution and they can't be used to restrict the peaceful exercise of basic constitutional rights and civil liberties, including the right to freedom of assembly," she said.

Bayan secretary general Renato Reyes likewise reminded the government that IATF resolutions should not be regarded as constitutional laws.

(UP) Diliman regarding the conduct of rallies.

"Kung doon talaga, bawal. Doon sa UP, kasi sa UP may sarili silang set-up doon, we'll just be negotiating with the administration. The guidance of PNP chief, General Archie Gamboa, is as long as you don't violate and don't get out of UP compound, it is okay," he said.

Sinas, who earlier drew flak for failing to follow the government's mass gathering protocols, warned that the violators of DILG's guidelines against mass gatherings will be arrested.

Meanwhile, the local government of Quezon City also announced that the processing of Sona rally permits will no longer push through.

"The Quezon City Government, through the City Legal Department, would like to inform the public that all applications for permits to organize or hold public assemblies shall not be processed," it said in a Facebook post.

In a Laging Handa briefing last July 21, Quezon City Mayor Joy Belmonte said protests in the area will be allowed as long as demonstrators apply for rally permits.

Human rights groups earlier planned to stage the Sona rally along Commonwealth Avenue, in front of the Commission on Human Rights.

The program will be from 10 a.m. to 12 noon, shorter than the usual Sona. (SunStar Philippines)