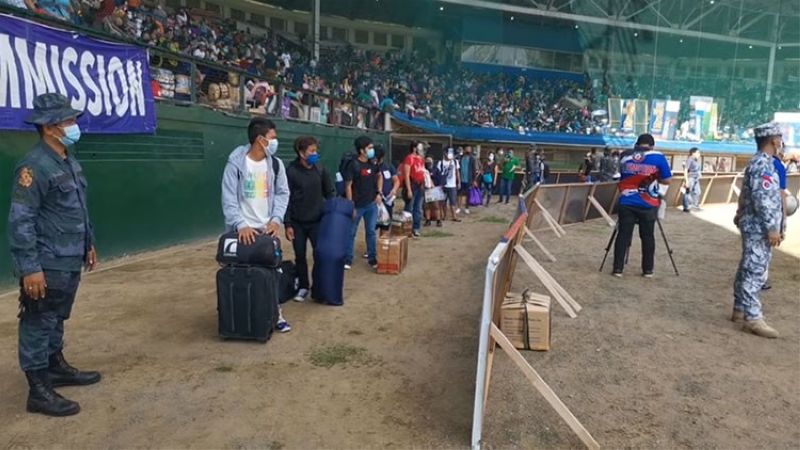 MANILA. Locally stranded individuals at the Rizal Memorial Stadium are lining up for a rapid test. (Screenshot from PTV video)

Thousands of LSIs spent the night Friday inside the sports complex as they wait for their trips to their respective provinces. The Department of the Interior and Local Government (DILG) said on Friday that over 8,000 LSIs will be sent home this weekend.

Presidential Management Staff and lead convenor of Hatid Tulong Project Joseph Joy Encabo said in Laging Handa public briefing Friday morning that they need to bring the LSIs to the Rizal Memorial Sports Complex as some of them have spent the nights on streets.

DILG Secretary Eduardo Año said Friday that the LSIs, who are among those included in the second phase of the "Hatid Tulong Program," will board 120 buses; five sea vessels, two of which are from the Bureau of Fisheries and Aquatic Resources and three from the Philippine Coast Guard; and Philippine National Railways trains starting Saturday, July 25.

Encabo said the LSIs from Northern Mindanao, specifically Agusan del Norte, Agusan del Sur and Butuan City were dispatched early morning of Saturday, July 25, while at 1 p.m., those from Davao and Soccsksargen will also leave Manila.

He added that as of Saturday, they have so far attended to about 7,500 LSIs, not including the walk-ins who arrived early morning.

He assured that the LSIs were provided food and drinks, as well as assistance from the Department of Social Welfare and Development and office of Senator Christopher "Bong" Go.

Encabo also guaranteed that the LSIs will undergo a strict medical protocol.

If the LSIs test negative for the new coronavirus, he said they will given an authority to travel, while those who will test positive will be placed in an isolation unit and will undergo a swab test. If the swab test results turns out negative, they will be allowed to travel to their respective provinces, while those who will test positive in the RT-PCR test will be quarantined in Manila.

He also thanked the local government units (LGUs) for accepting the LSIs, adding that if the LGUs can impose additional medical protocols for those returning individuals.

DILG Usec Jonathan Malaya, for his part, said the different LGUs in the country are so far accepting LSIs and returning overseas Filipinos.

He said the travel ban in Eastern Visayas and Western Visayas have been lifted and the DILG field offices and task forces have been talking to mayors to accept the stranded individuals.

He also assured that those going home to provinces have undergone rapid tests, checkups and other health protocols. (LMY/SunStar Philippines)