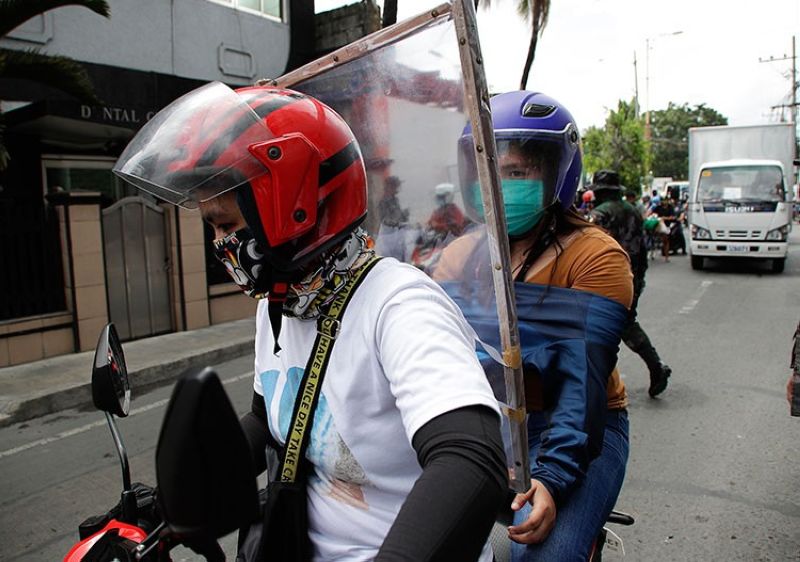 MANILA. A woman holds on to a plastic partition which the government requires for two people riding a motorcycle to prevent the spread of the coronavirus in the city of Navotas, Manila, Philippines on Thursday, July 16, 2020. (AP)

OVER 13,000 riders have been arrested for traveling without a motorcycle barrier and other violations as of Saturday, July 25, said the Department of the Interior and Local Government (DILG).

DILG Undersecretary Jonathan Malaya said during the Laging Handa public briefing Saturday morning that police nationwide have been apprehending violators, and so far, 13,665 violators were arrested.

Among those nabbed were those who traveled even if they are not married couples or live-in partners.

"There were 1,283 violators who traveled with barriers but are not couples," Malaya said in Filipino.

Backriding has been allowed since July 10 but for couples living in one house in areas under general community quarantine (GCQ) and modified GCQ, provided that a barrier is installed between the driver and passenger. Both riders should also be wearing face masks and helmets.

Malaya confirmed Saturday that the public has been given until July 31 to comply with the requirement of the National Task Force (NTF) Against Covid-19 to install a barrier to prevent transmission of the novel coronavirus.

Malaya warned that those who will not follow the guidelines after July 31 will be arrested.

The DILG official also said that the agency is investigating reports on accidents involving riders who have installed barriers.

He clarified that those involved in the accidents used faulty construction and wrong materials.

He also said that the IATF is open to other barrier designs.

"Submit the designs before July 31. The IATF is open to other designs. We will study it and announce if there are other designs approved," he said, adding that a technical working group has been tasked to study the designs. (LMY)