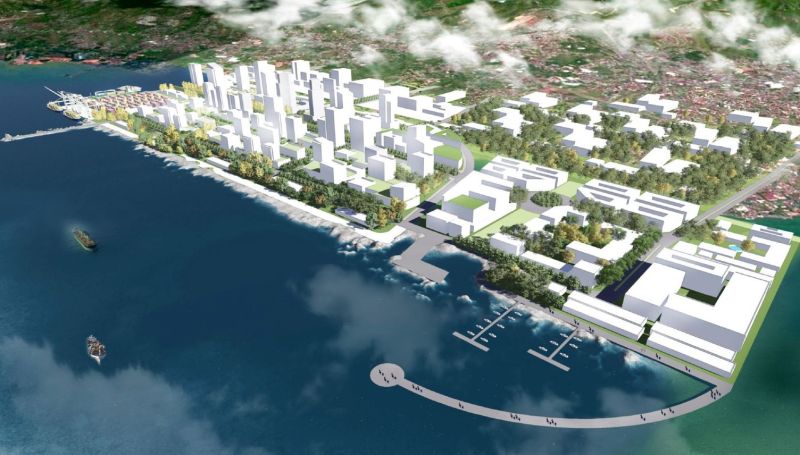 NEW DEVELOPMENT. An architect’s perspective of the Ming-Mori Techno Business Park, a joint project of the municipality of Minglanilla and joint venture Ming-Mori Development Corp., an affiliate of Cebu Landmasters Inc. The listed company is the managing developer of this master-planned business hub envisioned to house commercial, residential and industrial centers. (CONTRIBUTED, CEBU LANDMASTERS INC.)

The joint venture among the local government of Minglanilla and private consortium partners Ming-Mori Development Corp. (MMDC), an affiliate of listed firm Cebu Landmasters Inc. (CLI), envisions a world-class estate that will generate over 75,000 jobs in the municipality and its environs while meeting sound environmental guidelines.

Following the issuance of the ECC considered one of the major prerequisites and milestones of a reclamation project, the development will now be subject to the approval process of the Philippine Reclamation Authority (PRA).

“We hope to achieve the best balance among economic, social and sustainability goals and are pleased that our plans, which have been aligned to that ideal, passed the test of public hearings and DENR’s stringent review process,” said Jose Soberano III, chairman and chief executive officer of CLI, managing developer of the project.

Minglanilla Mayor Elanito Peña said “the grant of the ECC has brought us closer to the materialization of the reclamation project which will propel the Municipality of Minglanilla to higher heights and cements its role as a major economic player in the Province of Cebu.”

“The development project will not just modernize the landscape of Minglanilla but will also create immeasurable socio-economic opportunities to all people, not just for the Minglanillahanons,” the mayor added.

Following a memorandum of agreement between the Municipality of Minglanilla and MMDC in 2013, CLI was appointed in 2015 to tap a roster of consultants with a track record in similar projects to create detailed design and engineering plans, feasibility and environmental studies. In 2016, a memorandum of understanding was signed between the Philippine Reclamation Authority and the Municipality of Minglanilla with Ming-Mori as its private consortium partner.

Soberano disclosed that in addition to housing light industrial facilities, the future Ming-Mori Techno Business Park will be a self-contained township with residential and commercial areas. Its proximity to Cebu City makes it an ideal location for a master-planned community with live-work-play opportunities for its residents and visitors.

“The Covid-19 pandemic has shown us that well-planned communities that offer growth prospects alongside safety and security for employees and residents are the way to go. This township’s residents will have access to those benefits and more,” he explained.

The Ming-Mori Techno Business Park will be CLI’s third estate project. Land development of the 22-hectare Davao Global township is ongoing while its planned township in Cagayan de Oro is undergoing approvals.

CLI reports that more township projects are underway in the cities of Mandaue, Tagbilaran, Cagayan de Oro and Bacolod City. In 2019, the company was awarded as the Best Developer in the Philippines by Asia Property Awards. (PR)