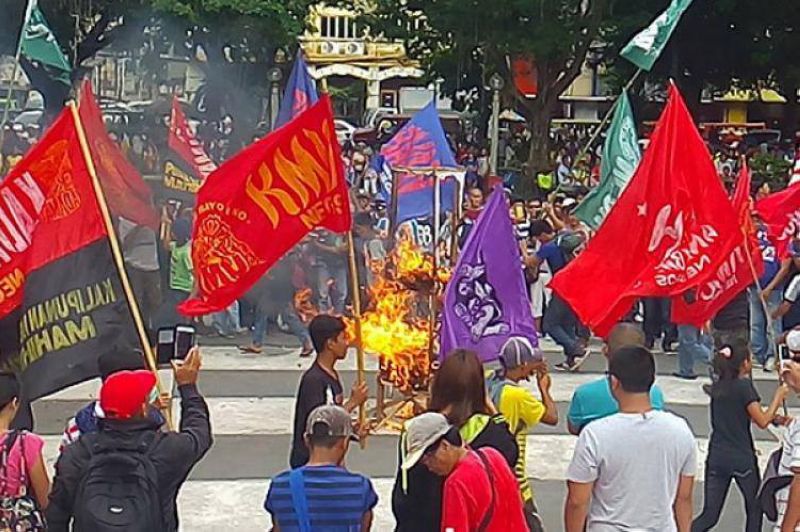 CHECK REALITY. The actual and true state of the nation will be contested terrain in today’s multiple State of the Nation Addresses, made by President Duterte and the alternative ones held by civil society. (File photo)

TODAY President Rodrigo R. Duterte will deliver his fifth State of the Nation Address (Sona), an annual report every president of the country is mandated to make to Congress since the Commonwealth Era.

According to the “Official Gazette,” published by the government of the Philippines, the Sona has become a tradition for the President to “give to the Congress information on the state of the Nation, and recommend to its consideration such measures as he shall judge necessary and expedient.”

The “Talumpati sa Kalagayan ng Bayan” has given birth also to another tradition: mass actions as “alternative” Sona simultaneously initiated by citizens and groups frequently protesting the presidential perspective of his or her administration’s accomplishments and pursuit of priorities for the nation’s progress.

This debate — “lantugi” instead of a “diskurso,” a speech delivered to listeners in a one-way flow of communication — is closer to the ideals of participatory democracy where the sovereign people (“haring lungsod”) engages with and checks public servants.

Dissent and mobilization are forms of participation in governance, especially when the elected fail in prioritizing the welfare of the public or varied sectors in society with their specific needs, vulnerabilities and aspirations.

Dialogue in the public sphere is the democratic ideal. After President Duterte delivered his first Sona on July 25, 2016, he “broke bread” in a merienda shared with members of cause-oriented groups, an unusual departure from custom preserved by photos taken by Renato Reyes Jr., secretary general of the Bagong Alyansang Makabayan (Bayan), and uploaded on Facebook.

Bayan and other groups held a rally on Batasan Road, a few meters away from the Batasang Pambansa Complex, venue for the delivery of the Sona since President Ferdinand Marcos used this for the June 12, 1978 Sona.

The protesters’ presence on the Batasan Road was described as “historic” by GMA News in its July 25, 2016 report, noting that in past Sonas, protesters were allowed only as far as the Commonwealth Ave.

Today’s fifth Sona of President Duterte is also being described as “historic” by the news media even though it departs radically from the liberal inclusive tone set by Duterte’s first Sona in 2016.

Only the state-run Radio Television Malacañang (RTVM) will be allowed to enter the Batasang Pambansa and cover the fifth Sona of Duterte, which is said to follow a “hybrid” format. For the first time, private media were instructed to re-stream the live feed of RTVM that will be uploaded on social media.

The Quezon City (QC) Government has banned mass actions today despite an earlier observation made by QC Mayor Joy Belmonte that rallies held as alternative Sonas have become a “tradition.” The Inter-Agency Task Force on Emerging Infectious Diseases’s prohibition on mass gatherings to prevent the spread of coronavirus disease (Covid-19) has been cited to explain these “historical” deviations in today’s Sona.

Ironically, the Duterte administration’s handling of the pandemic and the community quarantine phases tops the agenda in today’s arena: both the President’s fifth Sona and the mass actions that groups will conduct as alternative Sonas in defiance of the QC ban on physical assemblies.

The embattled state of the press, particularly the multiple cases filed against the Rappler media company and the denial of a broadcasting franchise for the ABS-CBN Corp.; and the passage of the Anti-Terrorism Act of 2020, the subject of at least 11 petitions filed to get the Supreme Court to declare its unconstitutionality are some of the concerns that citizens and groups will vent on in the “SONAgkaisa,” an alternative Sona held at the University of the Philippines in Diliman campus.

Citizens’ contestation of the official Sona is essential for elected officials who swore on oath to serve the public and put the people’s welfare before their own interests.