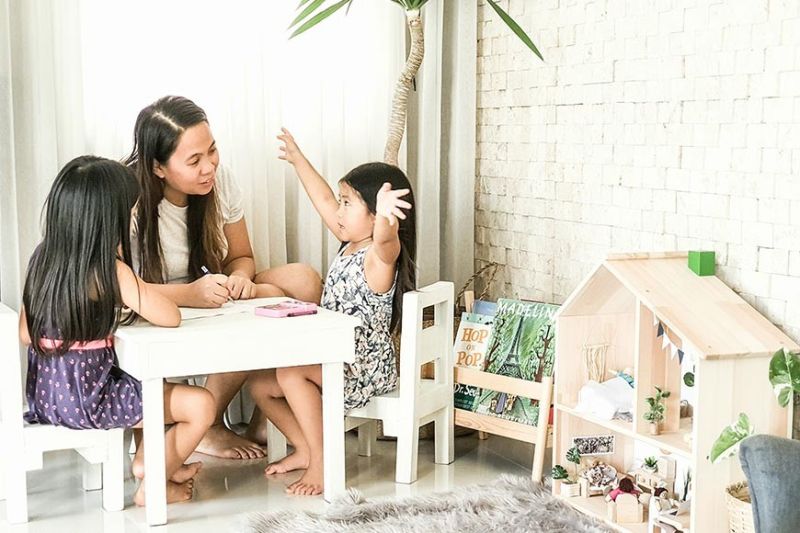 MORE TIME. Homeschooling allows Xyza Dalisay to spend more time with her daughters Shoe and Hayle. She said she and her husband, Titus, can witness every bit of them grow and move on to each phase of their lives. (Photo from Xyza Dalisay) 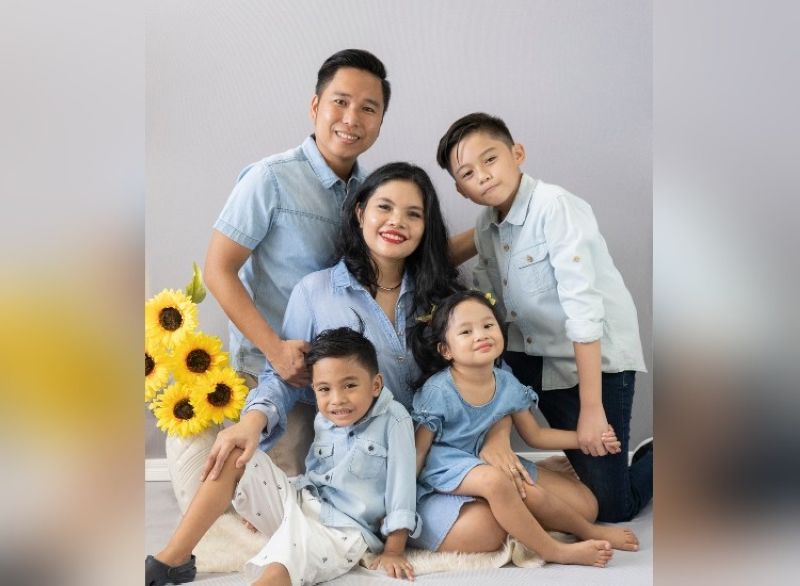 HARMONY Mae Quines, a mother of three and a work-at-home freelancer, starts her day as early as 3 a.m. or 4 a.m. to do the house chores.

By 8 a.m., she prepares print materials, reading lessons ahead, or preparing Youtube videos while the kids have their own Bible reading. Quines may seem like a teacher preparing for class. Well, she is in the context of homeschooling.

By 9 a.m. she begins homeschooling with her children. She attends to the preschoolers first while her eldest son reads his scheduled subject for the day.

At 11 a.m., the morning session is done. Before the afternoon class starts, Quines is already able to prepare lunch and squeeze in some work.

Homeschool in the afternoon starts at 1 p.m. but this time she attends to her eldest son while the two preschoolers take their nap. Classes end at 4 p.m.

The remainder of the day, the family spends time together. Quines ends her day at 10 p.m.

This is a typical day for Quines who has been homeschooling her children for several years now.

While not new, homeschooling has been gaining ground in the country. Amid the coronavirus disease (Covid-19) pandemic, some parents have considered homeschooling their children as a safety measure.

Even before the pandemic, there are already parents in Davao City that have been homeschooling their children -- some are new while some have been doing it for nearly a decade.

Among them is Dondi Alentajan, a marketing consultant. He and his wife have been homeschooling their four children for around a decade now. However, this form of education was not their first option for their children.

He said they got curious about it after meeting a couple in a church retreat who have been homeschooling their children.

"We were curious to hear about their homeschooled children," Alentajan said.

Junjun Gabayan, who is a businessman, also said homeschooling was not their first option when it comes to their three children's education.

He and his wife discovered homeschooling through Alentajan.

"Homeschooling was introduced to us by a newfound family friend at that time, Dondi and Tara Alentajan," Gabayan said.

Meanwhile, Quines found out about homeschooling through parenting websites.

"The first exposure was on mom sites that I used to frequent when we were trying to conceive. But I thought it was just an 'American thing' back then," she said.

"Before having children, I was the one who brought up the subject to my husband about homeschooling our future children when I heard it from church group members but he quickly shut it down because of socialization," she said.

Quines and her husband continued to learn more about homeschooling through the members of the church they are in. Being a member of a discipleship group, she was able to understand homeschooling more from other parents.

"One of the members was homeschooling her three kids then and we really saw how responsible and different they are from other kids we know. We can't explain but that brief interaction sold my husband and me out to homeschooling my children," she said.

Xyza Dalisay and her husband, Titus, have been homeschooling their children for a year now.

She said she and her husband got interested in homeschooling their children because it allows them to foster a deep connection with their kids.

"I can witness every bit of them grow and move on to each phase of their lives. Also, I love the idea that I can customize their learning," Dalisay said. She also discovered homeschooling through her churchmates.

Alentajan got interested in homeschooling because it allows them to customize the learning environment for each of their children; mold the children's values until they're ready to go out on their own in senior high; it gives him and his wife the privilege of being able to spend much time and bond with your kids.

"The primary aspect why we immediately decided to homeschool our children is the part of molding their character in the fear of the Lord. This is first and foremost, the rest will just follow like the academics and other extra activities," Gabayan said.

He added that homeschooling their children gives them the convenience to bring them during business trips without worrying that they will miss a lesson.

"You get the chance to talk to them more often not like during their stay in the traditional school that they have to wake up so early and come home late tired and exhausted and we can barely talk with them," Gabayan said.

After discussions and prayers, Alentajan, Gabayan, Dalisay and Quines, together with their spouses, eventually took a leap of faith to homeschool their children.

"We realized we will put our children in the best position to maximize their potential through homeschooling," Alentajan said.

Gabayan said what made him and his wife finally decide to homeschool their kids is that they want to teach their kids the right values and protect them from what is wrong.

"Our kids during that time were also insisting that they are homeschooled because they noticed many things that no longer coincide with their belief especially about God," he said.

Dalisay, for her part, said, "Because we decided to be responsible for our children’s education and well being."

Quines said she had to look into a lot of things to prepare herself to homeschool their children.

"I also looked into the legalities of homeschooling and how to go about it in the safest way. I found myself looking for various (and even trying out one) homeschool provider before settling into my provider now," Quines said.

Dalisay said that she and her husband sought the wisdom of friends who are veteran homeschoolers.

"We attended homeschool orientations and attended workshops in relation to homeschooling that is conducted by Arrows & Quivers homeschool hub," she said.

Gabayan said it was not easy for them when he and his wife started homeschooling their children.

"Well, it's quite hard a bit because we were not trained to be teachers having a lot of patience. You know the idea of a mother or father who became their teacher is also to new to our children. I'm sure other homeschooling parents would agree, that we were the one being homeschooled first," he said.

Quines recalled there were a lot of adjustments that needed to be done considering that one of her kids had to shift from the traditional school to homeschool. She and her son had to make adjustments in their schedules and with the new system.

"For the younger kids, it was the initial frustration that someone might encounter teaching basic reading and math. But the key is to just be persistent, but not strong until they are ready," she said.

Dalisay said what made it difficult for her when she started was doubting herself and her capabilities as the primary educator.

Through the internet, the life of homeschooling parents has been made easier. The internet allows the parents to get in touch with homeschool providers, source materials from different educational websites and provide them with the support and training to teach their kids.

In a sense, homeschooling parents have the flexibility to deliver lessons creatively.

The Alentajan couple initially enrolled their children with a homeschool provider. However, they eventually stopped enrolling their sons and aligned their studies with the Department of Education's (DepEd) prescribed curricula for their ages.

"Later on, we started using Quipper.com, which provides a free platform to assign DepEd-aligned lessons to our kids online," Alentajan said.

Likewise, the Gabayan family also started with a homeschool provider but eventually shifted to an open curriculum.

"They help us with different approaches and how to do them while still being DepEd K12 compliant," she said.

She also tried independent homeschooling before.

Dalisay, for her part, has her kids enrolled with homeschool provider Arrow & Quivers, where she attends workshops. They also provide her support as the provider assigns parents learning coaches that can help them in homeschooling.

Quines said having a homeschool provider ensures that the lessons the children learn are in line with what is being taught at schools.

"When you have a Philippine-based provider like mine, there is no need to worry about that. They give you everything including the suggested books you have to purchase which they already reviewed ahead of time. You also have your family advisor and Academic advisor in case you are in doubt or you have a material you want to use and want to double-check it with them. That's what's great about having a provider like mine," she said.

Alentajan also said to ensure his children's learning progress is the same with the kids at the formal schools, he and his wife have their sons take regular diagnostic exams to compare their learning progress with the rest of the country.

"We also have them take DepEd's PEPT (Philippine Educational Placement Test) certification test at the end of my kids’ school year to certify that their academic ability is at par with other children. The PEPT certificate then serves as our kids' transcript when they will move back to a traditional school later on," he said.

In homeschooling, both parents tend to share the responsibility of teaching their kids.

Gabayan said he and wife both teache their children but he does most of the math subjects.

Quines does most of the teaching in homeschooling.

"But it is a team effort... It's a tag team really. Also, I have to recognize the online teachers that we hire," she said.

With both parents being involved in the growing years of their children, allows them to inculcate certain values and skills that are not normally taught in schools.

Overall, homeschooling allows the family to spend time together in this fast-paced society we live in. However, aside from the benefits of homeschooling, parents also face several challenges along the way. (To be continued)