What they hope to hear 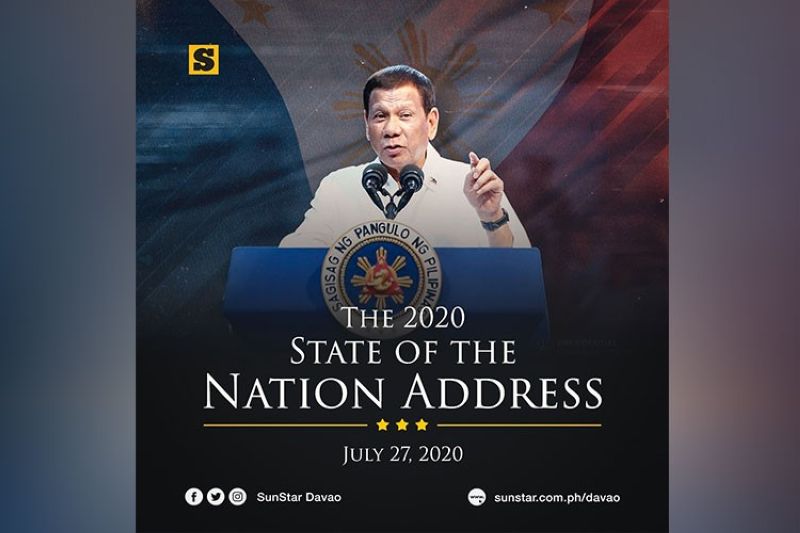 THE novel coronavirus (Covid-19) pandemic is the most challenging period in President Rodrigo Roa Duterte’s administration as it impacted not only health but also the economy.

As he presents his accomplishments, the business community in Davao City are looking forward to hearing measures on economic recovery for the coming months.

“It would be great to know if there are any further stimulus plans on the horizon that would aid in quicker economic recovery for the country,” he said.

Stephen Antig, the executive director of one of the largest exporters of bananas in the country Pilipino Banana Growers and Exporters Association, Inc. (PBGEA), shared Samson’s sentiment.

“What blueprint is he preparing for the recovery of the economy once the pandemic is over. The country definitely cannot afford knee-jerk reactions. I hope he will lay down his plans and strategies on how to address the increasing Covid-19 cases considering the dwindling resources of the government,” he said.

For European Chamber of Commerce of the Philippines Southern Mindanao Business Council (ECCP-SMBC) chair Antonio Peralta, he wants to hear from the president his efforts to ensure food security in the country, especially that Mindanao is an agricultural region.

“For us here in Mindanao, expectations are much more realistic in terms of the kind of programs for agriculture that can help our farming sector. Agriculture as you know contributes 10 percent of Gross Domestic Product (GDP) but then its budgetary allocation is less than that,” he said.

He is optimistic that it will be mentioned, recognizing the measures taken by the country’s finance department to cushion the pandemic’s impact on businesses.

“I think too that food security and keeping the economic pressures at bay will be the focus. It's a good thing that the DOF (Department of Finance) was able to reduce our national debt enabling us to get a higher credit rating which can result in lower borrowing costs,” he said.

“The efforts of the economic team over the last several years has strengthened our fiscal position. This enabled us to initially provide the needed stimulus program for the economy without going out on a full-scale borrowing spree. But of course, borrowings are now needed to bolster the economy and the country’s well being. The earlier efforts to collect taxes paid off well,” he added.

Davao City Councilor Mary Joselle Villafuerte, who is the committee chairperson on health, said she hopes the president will give room in his speech for his plans on the country’s Covid-19 response.

"I look forward to the President's Sona. I am sure he will give many updates on the Country's Covid response and the projects and programs he has implemented despite this pandemic," Villafuerte said in a text message.

Councilor Danilo Dayanghirang, meanwhile, said he hopes the president will highlight the government's accomplishment and plans in addressing the pandemic.

Peliño-Golle also said she expects to hear that he will not allow the resumption of the "destructive and extractive" mining industry, as he does not allow it in Davao City.

The issues on wastes management should be addressed, she said, by declaring that "single-use-plastics policy" as urgent.

"It should be passed and implemented. Instead of implementing the WTE (waste-to-energy) projects, LGUs (local government units) should be mandated to prevent and manage their wastes by implementing the Zero Waste strategy involving every citizen," Peliño-Golle said.

In regard to the Covid-19 pandemic, Peliño-Golle said the government should also consider ecological health, which she said has a huge contribution to the current human health.

"According to zoonotic studies, this pandemic could have been prevented if we had stopped destroying forests ecosystems, wildlife trade and massive environmental degradation. If so, if no concrete policy implementation and actions, we will be facing similar or worse crises in the future," she said.

Karapatan Secretary-General Jay Apiag, meanwhile, said they are expecting the president will include in his speech how the government addresses the different human rights violations committed under his administration.

"This is one of the controversial promises he promised during his first State of the Nation Address in 2016, that he will uphold the fundamental right and basic freedom of the Filipino people," Apiag said.

However, he said the government's human rights record has been "bloody" in Davao Region, after the president's four-year stay in the office.

Apiag said different progressive groups are "highly disappointed" with Duterte after signing the Anti-Terrorism Law. He said the law will only "silence" his critics and those who want to air their grievances to the government.

Kilusang Mayo Uno-Southern Mindanao Spokesperson PJ Dizon, meanwhile, said they are expecting the government would continue to address the plight of the public for a "more concrete plan" in addressing the Covid-19 pandemic.

He also said Duterte should stop blaming his constituents for the rising of cases by calling them "gahi'g ulo" (hard-headed).

"I hope he would understand why people need to go out. It is because they cannot keep on relying on the government. They need to go out and find food and other means of income," Dizon said.

The group, he said, is also calling for mass testing and intensified contact tracing in order to mitigate the further spread of the virus and reopen the economy.