Groups cry foul after being tagged as 'terrorist recruiter' 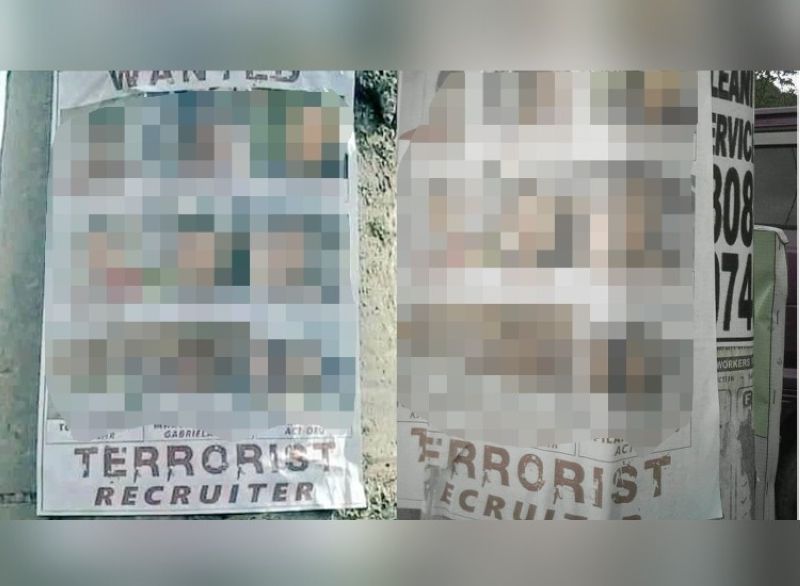 PROGRESSIVE group leaders cried foul over posters spreading in some parts of the Davao City, tagging them as "terrorist recruiter," which they claimed is now a serious threat a week after the Anti-Terrorism Act took effect.

In a Facebook post by Kilab Multimedia, a poster was spotted in Barangay Maa, wherein the printed poster indicated a "WANTED" text on top of it with photos of various prominent activist-leaders in the region, tagging them as "terrorist recruiter." The poster, however, did not indicate any signatories or any remarks of who initiated it.

Apiag, in a phone interview with SunStar Davao, said they are condemning the "malicious and baseless-tagging" against them.

While this was "no longer new to them" since they have been "vilified" as a supporter of a communist rebel group, he said they are alarmed since it came a week after the Anti-Terror Law took effect.

"Basically, alarming siya tungod kay this is contrary to what the government is saying and doing nga dili gamiton ang Anti-Terrorism Law sa mga vocal dissentants and critics niya. We are now experiencing the prelude as a full blown implementation sa Law despite the absence of the implementing rules and regulations," Apiag said.

Dizon, in a separate phone interview, slammed the incident as another tactic to divert the public's attention from the government's "failure" in responding to the Covid-19 pandemic.

He said they did this in time for President Rodrigo Duterte's fifth State of the Nation Address (Sona).

"Dapat dili unta himuon nga reaksyon sa gobyerno. Sa panan-aw namo wala man gyu'y naay kapasidad na muhimo niini is ang gobyero, kauban ang iyahang mga state forces (For us, no one else has the capacity to do this but our government)," Dizon said, adding the government should be proactive in accepting criticisms.

He also defended those names included in the poster, saying they are only "championing the rights of the workers."

Dizon said they will not be threatened by the attacks and vow to continue "to fight for the democratic rights of the workers and the Filipino people."

Apiag, meanwhile, said they are going to discuss the matter to their legal action on what measures to take after the incident.

"We are eyeing to include this another 'red-tagging' and 'terror-tagging' against our organization in our filed petition to question the constitutionality of the Anti-Terrorism Law in Supreme Court," Apiag said.

Davao City Police Office Kirby John Kraft told SunStar Davao in a phone interview that he immediately instructed all his personnel to remove and gather those posters, which they will investigate.

Kraft said they were not able to apprehend nor arrest anyone who is involved in posting the malicious paraphernalia, as of press time.

He said neither DCPO nor any law enforcement group in the city is involved in the matter.

"Tayo bilang law enforcer, makakasama ito para sa atin para sirain sila. Wala kaming mapapala diyan (we, as law enforcers, have nothing to do with it. In fact, we will not benefit from it if we would even get involved with it)," Kraft said, adding it is illegal to accuse anyone without sufficient evidence.

He said the incident aims to discredit the government, including its security forces, of which they will look into who is responsible.

The police official, meanwhile, assured the public, including progressive groups, that the government will be one in safeguarding their rights to express their grievances to the government with the passage of the Anti-Terrorism Law.