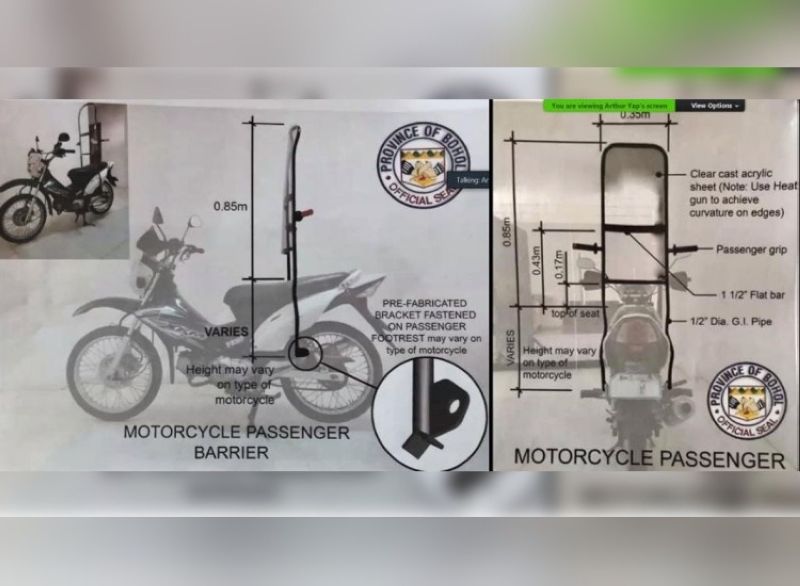 MINDANAO Development Authority (Minda) Chairman Emmanuel Piñol formally appealed to the Inter-Agency Task Force on Emerging Infectious Diseases (IATF-EID) to reconsider and suspend its "Motorcycle Barrier Rule," saying he is "acting on the appeal of poor families in Mindanao who depend on motorcycles for their livelihood."

In a formal letter submitted to the IATF, Piñol said its policy requiring barriers for pillion riding (backriding or angkas) is "impractical,"

"The policy is deemed impractical because it does not serve its intended purpose of protecting the motorcycle rider from any supposed transmission of infectious disease," Piñol an official memorandum forwarded to the IATF.

He added, "rather, it would only be a present danger to both the rider and the backrider since it would be difficult for them to adjust with a contraption in between them."

He also said the mandatory barrier could lead to an increase in the number of vehicular accidents since it would be difficult for the rider to maneuver the motorcycle.

He said this was based on the feedback gathered by Minda from the field.

"Impractical since the barrier makes riding tandem dangerous because a strong gust of wind caused by huge vehicles coming from the opposite direction could throw the motorcycle off-balance and may lead to accidents," Piñol said.

"Expensive and oppressive. The barrier will be an added financial burden on poor families who use motorcycles for livelihood and transport and the excessive fines on violators of the policy could open a new window for corruption," Piñol also said.

Also, he said, the policy is "viewed as discriminatory because the concern on the possible transmission of Covid-19 virus between two people traveling together is only focused on motorcycle riding but it ignores the fact that those traveling inside airconditioned private cars face greater risks."

Piñol said the "Motorcycle Barrier Policy" is an added financial burden, which "will affect efforts to restart the economy in Mindanao" and other rural areas of the country where the motorcycle is the main vehicle for transport and livelihood.

While he said he is supportive of IATF's goal in preventing the spread of the virus, he said there are other means of implementing it without adding a burden to the people.

"We support the IATF's effort to control the spread of the Covid-19 virus but, surely, there are other ways of doing it other than implementing measures which would make life more difficult for our people,” he said.

The appeal was forwarded, days before IATF's set deadline, which was extended until July 31.

The inter-agency deemed the placement of barriers as a health measure to prevent the further spread of the Covid-19.

Piñol also previously forwarded a formal appeal to the IATF to exempt Mindanao in the "no backride policy" of the national government as it is affecting the island's economic recovery.

Jeffrey Singson, PSME national president, said their stand is based on the science and engineering of how air interacts with moving bodies called the fluid dynamics or aerodynamics in engineering.

Pillion riding has been allowed since July 10 for couples living in one house in areas under general community quarantine, provided a barrier is installed between driver and passenger.