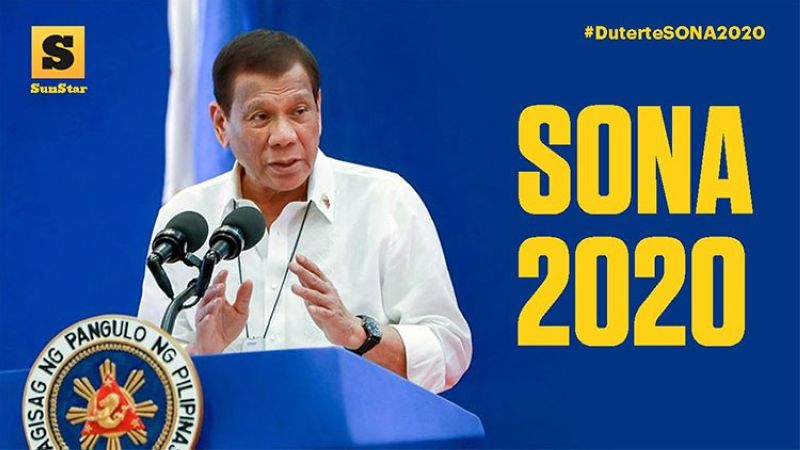 Duterte was joined by Senate President Vicente Sotto III and House Speaker Alan Peter Cayetano, as well as some lawmakers.

Other legislators and guests who were expected to attend the Sona Monday were not able to make it as they tested positive for the coronavirus, reports said.

The government implemented a very strict security at the Batasang Pambansa on Monday, with rapid tests and swab tests conducted for those entering the venue. Only 50 people were also allowed inside the plenary.

Below is the summary of this year's Sona.

3:57 p.m. -- President Rodrigo Duterte arrived at the Batasang Pambansa Complex in Quezon City, where he will deliver his fifth State of the Nation Address (Sona). He arrived onboard a helicopter.

COVID-19 VACCINE. Duterte: The vaccine is around the corner. Sooner and not later, the coronavirus will be laid to rest.

DRILON, ABS-CBN. President Rodrigo Duterte hit Senator Franklin Drilon and ABS-CBN. "I am a casualty of the Lopezes during the 2016 election." He called the Lopezes oligarchs.

GREED. Duterte: If we allow greed and self-interest to rule us, we will be left with nothing better than the lesser evil instead of the greater good.

MALASAKIT CENTERS. President Duterte commends the initiative and work of Senator Bong Go. He said there are currently 75 Malasakit Centers in the country. He said these will ensure that people remain healthy and supported.

SERVICES STREAMLINING. Duterte said frontline processes including consular processes and business permits, among others, were streamlined.

PEACE AND ORDER. Duterte also thanked the military, police and security guards for working to keep peace and order in the community.

COVID-19 RESPONSE. Duterte thanked local government units for stepping up and initiating their own response against Covid-19. He said he is praying that the officials will set aside partisan politics and do what is good for all.

SOCIAL AMELIORATION PROGRAM. Duterte said the government has allocated P2.5 billion for poor and low income household who are affected by the pandemic.

He added that senior citizens were provided stipend.

BAYANIHAN LAW. President Duterte thanked members of Congress for "the effort you have invested in passing" the he Bayanihan to Heal as One Act.

AID FOR OFWS. Duterte assured that the government will help the overseas Filipino workers (OFWs), saying he had tasked Tesda to come up with trainings that will retool the OFWs. He said he also called on Ched for scholarship programs for qualified dependents of OFWs.

The President also called on DA and DTI to come up with agribusiness and entrepreneurship to help the displaced OFWs, while he tasked Landbank and other government financial institutions to provide low interest loans to OFWs.

LOCAL TRAVEL. Duterte: "We enjoin our people to boost the economy by traveling locally."

ONLINE CONSUMER AND DATA PROTECTION. Duterte said the government is committed to protecting both the physical and digital lives of the Filipinos.

RED TAPE. The President call for paperless transactions in government. "We need e-governance for our people...to better transition into the new normal and minimize red tape."

FACE-TO-FACE TEACHING. Duterte reiterated that he will not allow the traditional face-to-face teaching unless there is Covid-19 vaccine. "I cannot put the lives of our teachers and students at risk."

TELECOMMUNICATIONS. The President warned Smart Communications and Globe Telecom to improve their services before December, or else he will spend the next two years in ensuring that the government will improve telecommunications "without you." "Better have that line cleared."

HEALTH WORKERS. Duterte assured that the government will hire and deploy more than 20,000 health professionals to isolated and disadvantaged areas, and at the same time improve barangays and rural health units facilities.

MARTIAL LAW. Duterte said when he declared martial law in Mindanao and extended it 3 times, it ended without abuses by the civilian sector, police, military "because this time, I know that they know how to love the country."

DEATH PENALTY. Duterte reiterated the "swift passage" of the law reviving the death penalty by lethal injection. "This law will not only help us deter criminality but also save our children from the dangers paused by illegal drugs."

REPUBLIC ACT 10912. Duterte called on Congress to amend the Republic Act 10912, also known as the Continuing Professional Development (CPD) Act of 2016. "In this time of pandemic, the requirement for professionals to undergo seminar is unrealistic. Itong mga seminar na ito dapat mahinto."

PENSION. The President told Congress to prioritize the passage of a law that will adjust the system for retirement and pension.

DOUBLING OF POLICE SALARY. Duterte said he doubled the salary of policemen to eliminate corruption and so the cops will have a decent life and "that they are able to get the things which ordinarily cannot be reached by a government employee."

'DISASTER' DEPARTMENT. Duterte emphasized the creation of the Department of Disaster Resilience and People's Safety, saying this must be created before another major disaster would hit the Philippines.

LAND USE ACT. Duterte called for the passage of the National Land Use Act, which he said has been pending for decades. "Pakisilip lang ho ninyo yan."

He added that the rehabilitation of Boracay showcased the government's resolve to safeguard environment.

ONLINE TRANSACTIONS. Duterte said an Internet Transaction Act must be passed to ensure the growth of e-commerce in the country.

TERRITORIAL DISPUTE. Duterte reiterated that the Philippines cannot afford to go to war with China. "China is claiming it. We are claiming it. China has the arms. We do not have it. So it's simple as that. They are in possession of the property. So what can we do? We have to go to war, and I cannot afford it."

BATTLE VS COVID-19. Duterte said the Filipinos have no other choice but to work together. He said the government is not perfect, "there could be improvements here and there," but he assured that the government "will not stop until we get things right."

He vowed that the government will address squarely these problems and challenges because of the Covid-19 pandemic to be able to proceed to a new normal.

FIGHT VS COVID. President Duterte called on the Filipino people to unite. "Ito ang panahon para magtulungan. Hindi panahon para maglamangan... This is the time to bring out the best in us."